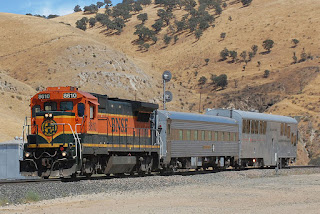 From Montana we drove to western South Dakota.   Somewhere east of Livingston, Montana we spotted an unusual train very similar to this Internet photo going by in the opposite direction.  I did not get a picture of it myself but spotted the name "Skagit River" on the last car.

Searching the name on the Internet I was able to determine that the Skagit River is a special track inspection car that had been built from a bi-level commute car.  This train operates all over the BNSF system so we really did spot an unusual train. 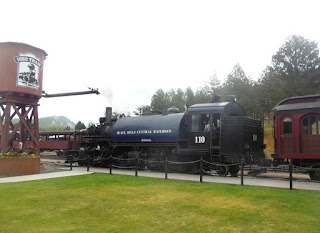 Our time in South Dakota included a ride on the Black Hills Central Railroad, also known as the 1880 train.

It runs on about 10 miles of what had been a narrow gauge branch line between Hill City and Keystone.  The line had been rebuilt to standard gauge for the 1880 train. 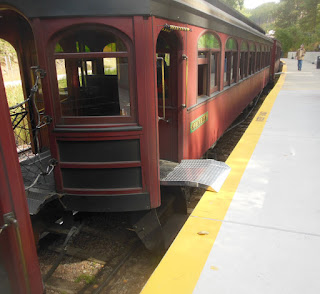 At Keystone the engine moves to the other end and pulls the train while in reverse.The platform at Keystone was a modern concrete arrangement at the full height of the rail car floors.  While common in Europe and Japan it is not often seen in the US on surface railways.  The way this worked was to have the track far enough out from the platform for clearance and then put out bridges for passengers to cross. 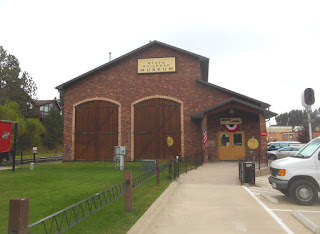 Right next to the 1880 train station is a small but well done museum in what appears to have been a 2 stall engine house at one time.

While it is called the South Dakota State Railroad Museum, it is private and has no connection to the state government. 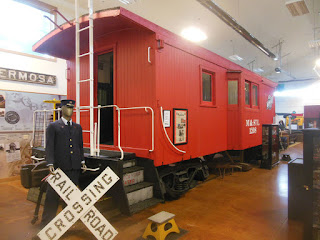 The centerpiece of the museum is this nicely restored Minneapolis & Saint Louis caboose.

There are still tracks in the floor that led to a set of doors at one end of the building so I suspect that they could swap exhibit cars from time to time. 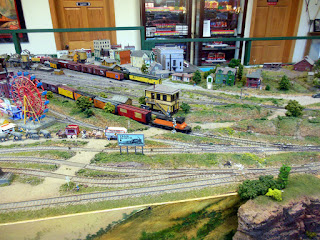 The museum also includes a nicely done HO scale layout with 3 trains that run on 3 separate routes for 5 minutes when a visitor presses a button.