About this time in 2014 I started work on this layout and it has been slowly progressing around the train room and at this point is approaching the door to the layout room. This layout has been built one section at a time with a return loop of some sort being moved along on the leading edge to make running possible.

So what's the next expansion ?

The photo below comes from RailPictures.net and was taken by John West in 2009.  This is on the west side of the Palisade tunnels and is one of the most photographed spots in my modeled area.  This scene is the inspiration for the next expansion of the layout in about a 4-1/2 foot space.  After entering the tunnels the tracks will cross the lift bridge across the doorway. 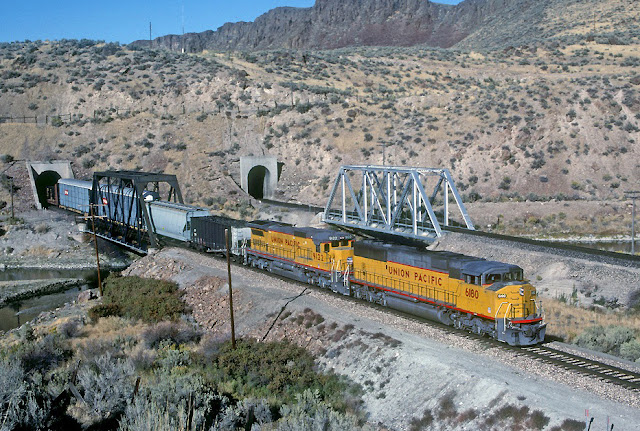 It was photos like the one above that got me interested in modeling this particular line and I built models of these two bridges several years before starting the layout.  Below is the photo I took of them in 2010.  They have been in storage ever since waiting for the layout to progress to this point. 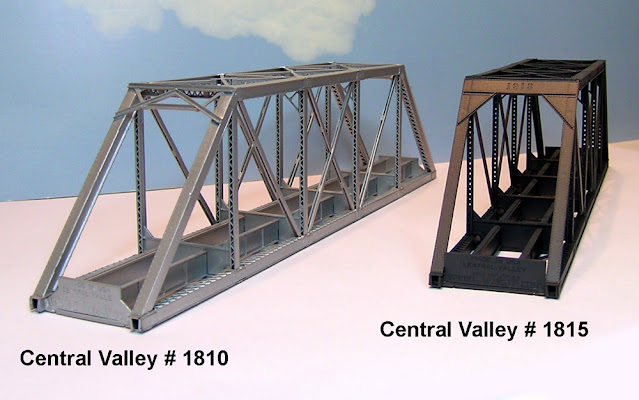 I also have the tunnels portals already built.  I mentioned those in this post back in June.   So this should hopefully move along quickly through the end of the year with some of the major items already built.

Posted by nscalestation at 10:53 AM 2 comments:

The rebuild of the staging yard is now finished.  This took about 7 weeks to complete which was a bit less than I had expected.  All 4 staging tracks in the main yard plus the siding on the return track are available for use and I have been running various types of trains through to verify everything is working correctly. 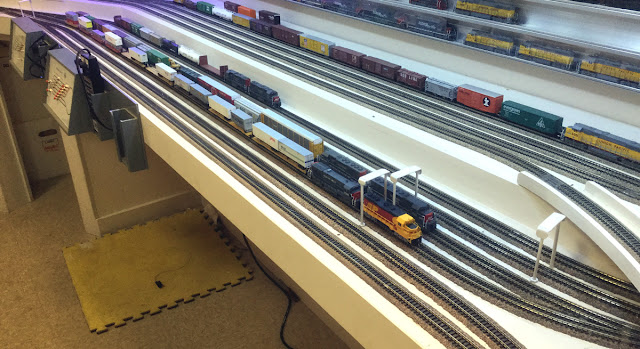 Back in this April post I explained how a section of the return track was used to activate a current sensing unit that would cause the Wye turnout to automatically align for the yard exit.  Because the new yard has a siding on the return track I was not able to do it the same way so an Azatrax IR sensor was placed between the end of the siding and the wye turnout to trigger the turnout to change.

Back in 2014 when I was building the yard I was able to do most of the original yard wiring before the yard was installed and tipped up on edge so access was easy and I kept everything nice and neat.   The wiring modifications this time had to be done with the yard in place but I really tried to keep it neat.  What did help was having the controls in the wall cabinet under the yard.  Shown in this photo are all of the turnout controls for the new setup. 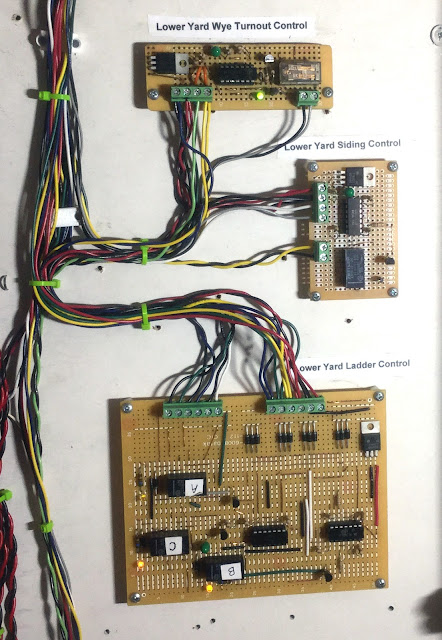 There are few more things I learned from the yard rebuild that I have not had a chance to post on so those will make good topics for future posts.

Posted by nscalestation at 11:20 AM 2 comments:

In this project on the entry end of the yard I had used 5 of the MTB MP5 turnout motors on 4 new and 1 old Peco turnouts.  In most cases the MP5 motors can force the points past the spring tension so I did not bother to remove the spring.  The 5th turnout on the return track siding was of the old design and I did have to remove the spring as the linkage was going through very thick bench work in that location.

At the loop end of the yard I was using 3 new and 1 old Peco turnouts with Tortoise motors.  I removed the springs on all of these and everything was going well until I started to install the turnout linkages on the 3 new ones.  As I fiddled with getting the linkage into the hole on the moving tie, the tie came completely off of the points.

What I had not realized until then was that the design of the Peco turnouts had changed and the current ones rely on that spring to keep the moving tie connected to the points.  There is a wider gap between the moving tie and the head tie on the single track end. 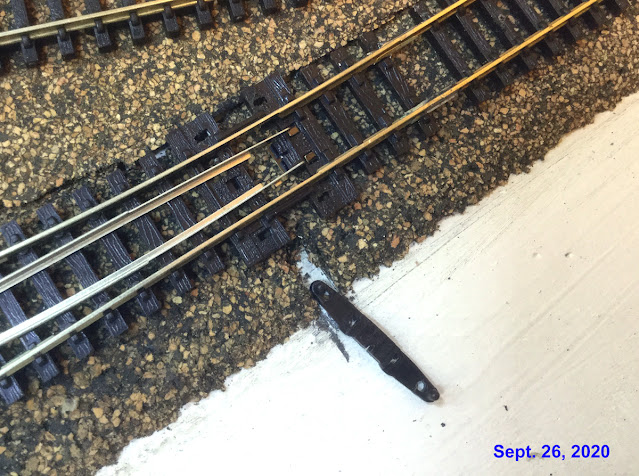 My solution for this was to insert a .060 x .040 Evergreen styrene rod into the space between the moving tie and the head tie on the single track end of the turnout.   I used a black sharpie pen to blacken it but left it white on the bottom so it would stand out in this photo.  That tab that is covering half the strip in the middle helps to hold it into place.  I had to fully remove the turnout and do this on the work bench. 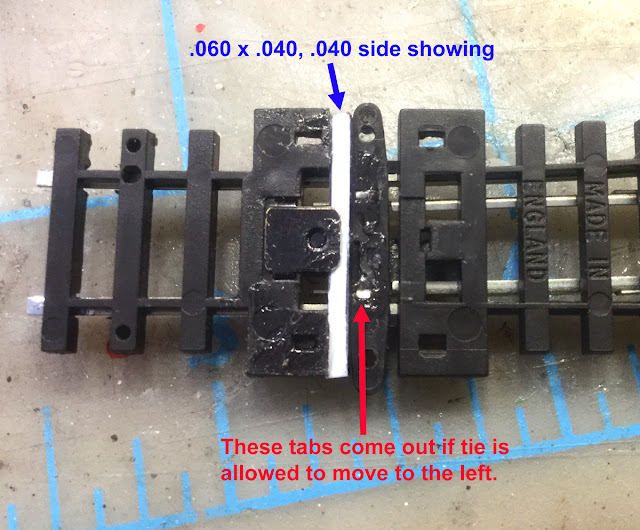 For the two turnouts that had not fallen apart I was able to slip a shorter section of styrene strip in from each side of the turnout and glue it into place with ACC being careful not to get any adhesive on the moving tie.  I was able to do this without removing the turnout.  I found it impossible to slide one longer section of strip past that tab in the middle so that is why I had to do it this way. 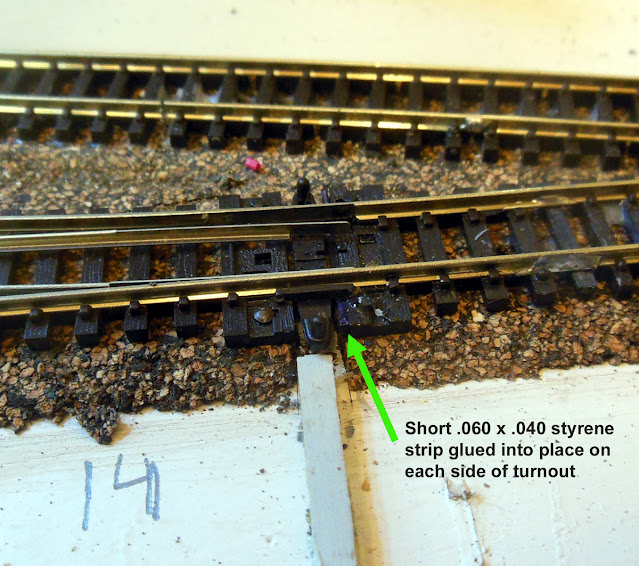 Posted by nscalestation at 9:32 PM No comments:

The work on the rebuilding of the lower staging yard, also known as Sparks is entering it's second month. All of the track work has now been completed.  The turnout motors have been installed, wired and tested for correct connections to the frogs, and the control panel has been completed. 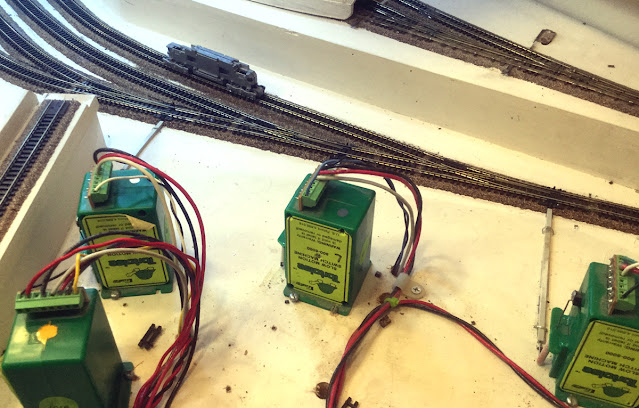 The control circuits need to be finished for that control panel to do much.  It was originally intended to reuse the Digitrax DS64 decoders but I discovered that the MP5 turnout motors draw too much current for them so I am needing to build control circuits to replace it.  A new control circuit has now been finished for the siding that is on the return track.  This will allow momentary push button switches to control the route selection. 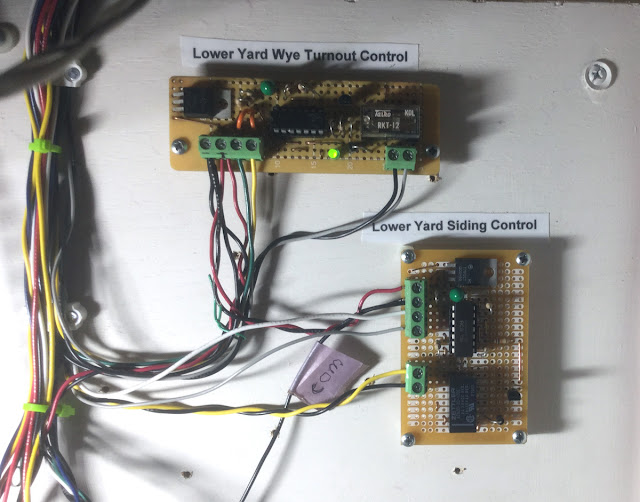 Below is the schematic diagram of the circuit I am working on now.   This includes the diode matrix and Set / Reset logic circuits to latch relays that control the polarity of the voltage applied to the turnout motors.  This will also allow for single push button route selection of 4 tracks in the yard. 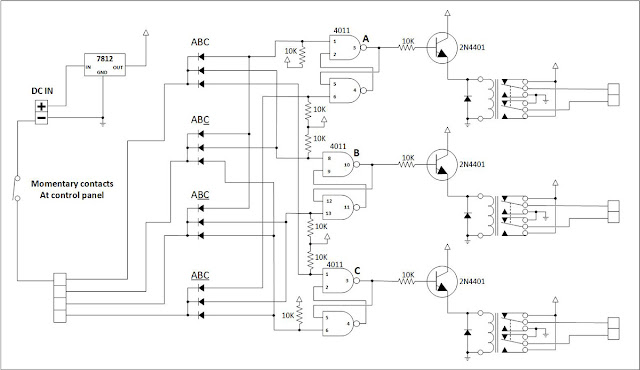 Posted by nscalestation at 9:33 AM 4 comments: