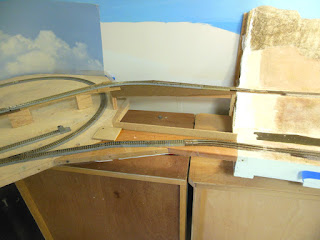 The Harney section has been installed into the layout and the end of it was close enough to the old test layout to connect to it rather than use the turn around loop again.   Bridges were made from scraps and tracks laid across connecting the layouts. 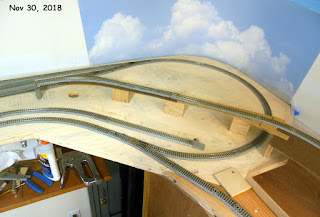 The test layout is Kato Unitrack on a shelf that has been changed many times in the last 5 years. This latest configuration is a combination of return loop for the main layout while still being an operating layout by itself.  More about that in a future post.


Posted by nscalestation at 12:07 PM No comments:

Trying my hand at sky board painting

In preparation for installing the Harney section into the layout the plastic sky board needed to be extended and as only the first few inches above the mountains would show I thought I would paint a sky backdrop to match the sky that is on the photo backdrops. 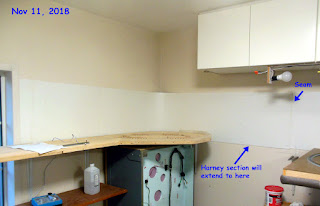 The test layout that has been along the end wall was taken down for access and another 16 inch wide sheet of fiberglass reinforced plastic panel was installed.  Seams and nail holes were patched with Spackle and then the panel was painted the wall color. 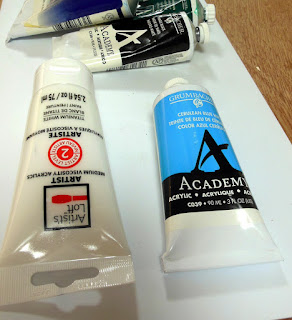 I have been using Artist Acrylic paints for my river bottoms and happy with those results picked up what I thought was a light blue and some white to add to my collection for working on sky boards. 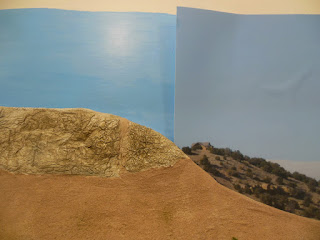 I read somewhere that the higher sky is slightly darker than close to the horizon and that can be seen in the photo backdrops.

Even with lightening the blue, it dries a bit darker so I kept lightening.  Getting closer with each application.  I think when all is right I may need to spray some flat to get rid of the reflections from the lights. 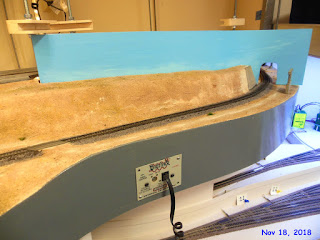 The Winnemucca area also has a small sky board that I am painting.  This one also needs some lightening.

It's fun working with these Acrylic paints to get the results I want.  I may also try adding some clouds as I go along.

Posted by nscalestation at 3:21 PM 2 comments:

One of the first things I purchased when planning this layout was one of the BLMA brass thru truss bridges.  The time has finally come to install in on the layout.

This bridge comes with nicely detailed bridge shoes so I did not need to add any like I did with the Central Valley bridge I have in another area of the layout. 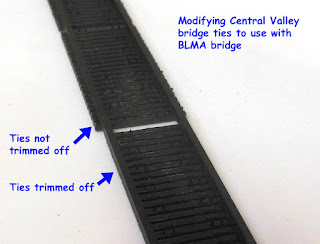 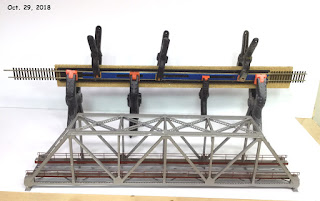 After removing the ties on a section of Micro Engineering flex track I applied a coat of Plyobond adhesive to the bottom of the rails and set the rails into the the slots on the Central Valley bridge ties.

After the adhesive has set overnight, I painted the entire assembly rail tie brown.  Before the paint fully set I removed the paint from the tops of the rails with a razor blade. 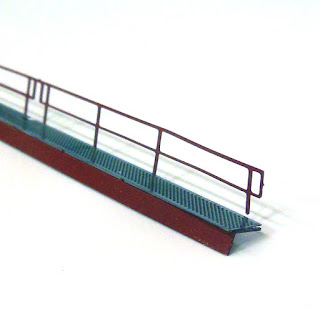 The bridge comes with nicely detailed stainless steel walkways.  The decks are left unpainted and the handrails and support structure are painted a semi-gloss oxide red.  I felt these things were too shiny so I removed them and air brushed them a flat oxide red. 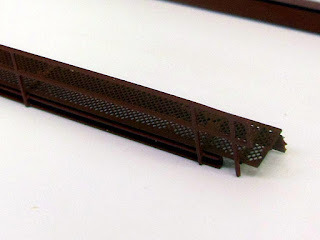 Here is one of the walkway assemblies after painting.   These were attached to the bridge with CA so I will re-attach them the same was. 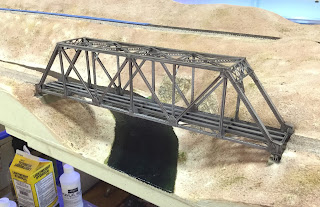 The bridge itself got an overall weathering using acrylic black weathering wash to bring out all the great details in this model.  Then some rust highlights were added with weathering powders. In this photo it is temporarily set in place.

The walkways were glued back into place.  A bit of adhesive was spread along the runners that support the track and the painted section of bridge track was set in place and weighted until the adhesive set. 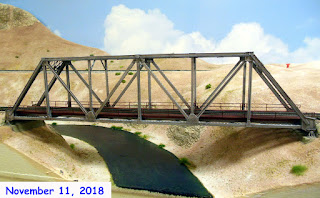 The bridge shoes were then attached to the bridge abutments with adhesive and the track on the line connected to the smaller section of bridge track.

I am quite happy with the way this came out and seeing the 200 ft camel back version of this bridge still available on ebay I am tempted to get one for another crossing down the line.
Posted by nscalestation at 8:02 PM 6 comments: 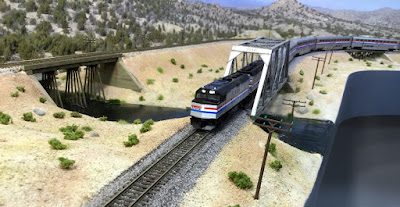 The Amtrak California Zephyr runs through the area I am modeling and up until around 1983 did make a stop at Carlin.

I have always planned to include the California Zephyr in my roster of trains to run on the layout and had been waiting for the right time acquire it.  That time ended up being now.

Amtrak runs the bi-level Superliner equipment on most of their longer routes including the Chicago to Bay Area California Zephyr.  For my era I choose the Superliner 1 in phase III paint scheme along with a pair of F40PH locomotives.  Kato offers a great selection of Amtrak Superliner car models in sets which can be combined to make up a consists closely matching any particular train.   They have done several releases of these with the most recent being about a year ago.   This is what I ended up buying from several different sellers on ebay.

These are all decorated in Phase III

I already have a good collection of Kato Japanese passenger trains and have been very happy with their quality and accuracy so I had high expectations for my Amtrak train.  I was not disappointed,  the cars all were very free rolling and the pair of F40PH locomotives can easily pull them up the helix.  I was already familiar with these type of locomotive mechanism and was able to quickly install the DCC decoders.  Several trips through the layout have been completed with no problems at all and the train even fits in the shortest siding of the staging yard. 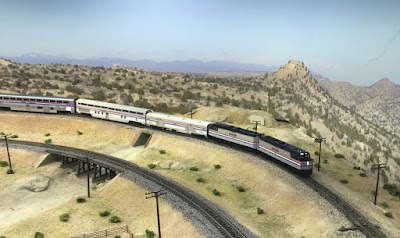 As the earliest era would include the pre 1983 time frame I'll have to decide if I want to include some sort of station stop when I get to building the Carlin section of the layout.


For now I can enjoy running this train in the mix with the freight trains running on the layout.  I'll also look forward to running it on the Ntrak layout next time I can make it to a show.
Posted by nscalestation at 9:19 AM 2 comments: