Now that most of the track and turnouts are in place on the lower or Southern Pacific section of the staging yard, I am beginning to get serious about wiring and controls.  These days it is getting more common to use computer controls and while I'm open to that, I still like an actual switch or indicator as opposed to a computer screen for an operator interface.   I actually enjoy this part of the hobby and have built a number of control panels over the years for my own layouts, was well as club projects.  Here are some of those.

Here is what's left of the control panel I built for the Los Angeles Terminal District layout.  The track layout was made from styrene strip glued onto a plastic panel.  The box was made from scraps of birch plywood. 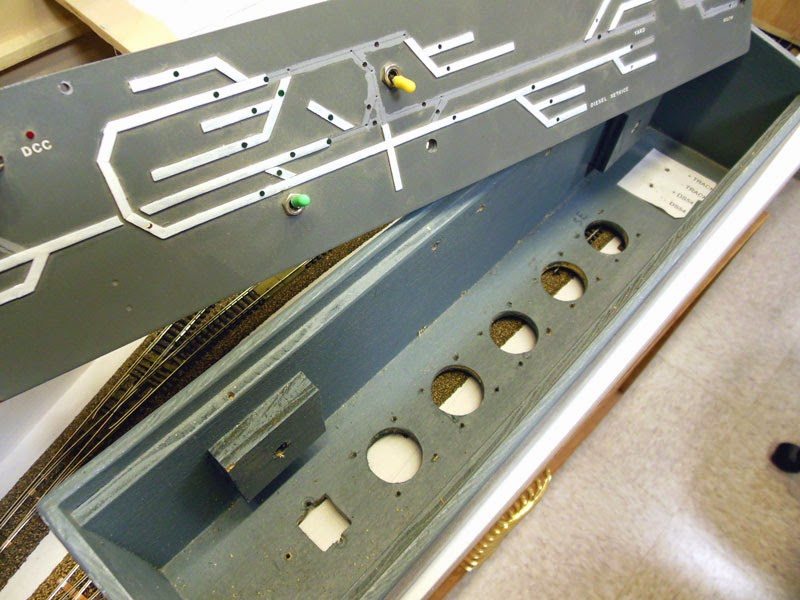 The holes on the bottom of the box were for several connectors that went to the power supply and the 5 modules of the layout.   The plastic panel just sits on the top inside the box without being held in place by screws so access to the inside was easy if needed. 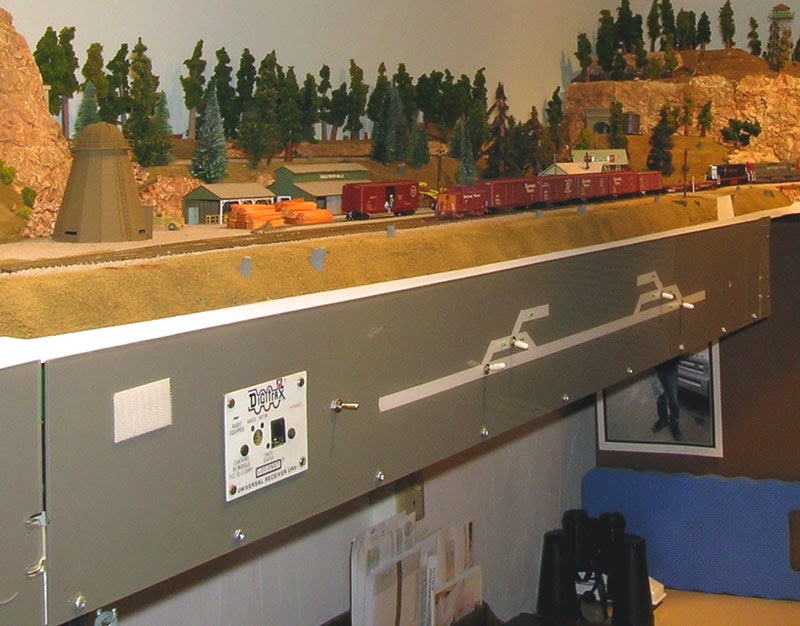 Here is view of the California Northwestern layout showing it's control panel.  This one was done on Plexiglas by taping the track layout, painting the back gray, then removing the tape and painting white.  The whole thing was made into a pull out drawer and the power supply and DCC system was inside but easily accessible. 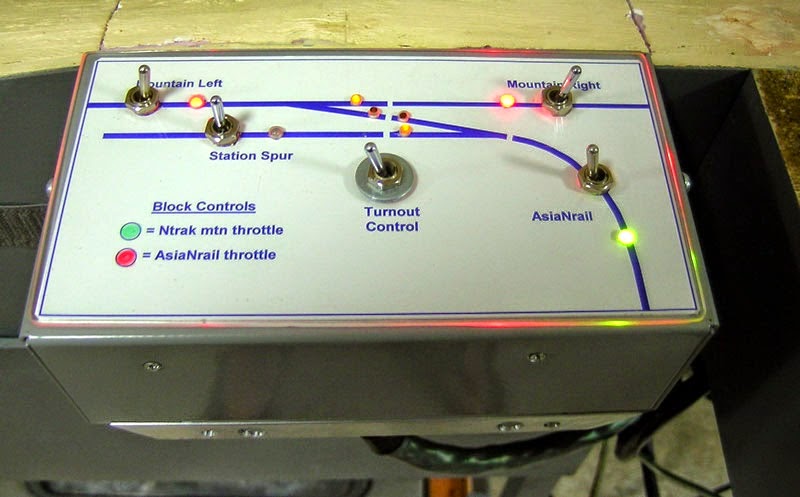 Last year I built this control panel for one of my Ntrak modules.  It's contained in an aluminum box that is mounted on the module.  The track layout is printed on paper that is sandwiched between the box and a sheet of Plexiglas.


For this staging yards controls I am using some elements from each of the above examples.  I am really hooked on the idea of printing a track plan because it's so neat, can be changed, and a spare can be used as a pattern for drilling the holes in the Plexiglas needed for switches and LED indicators. 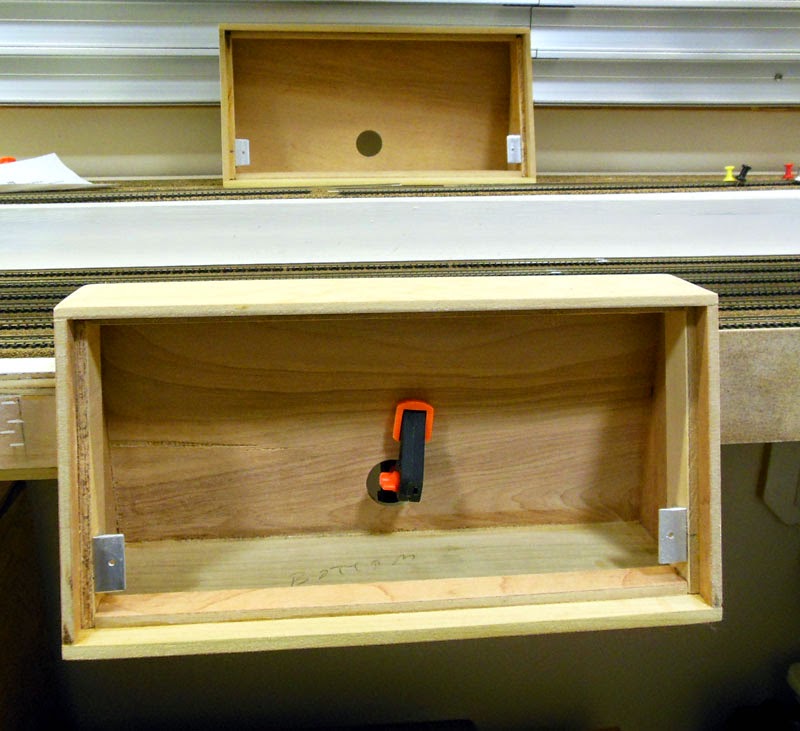 As this staging yard is actually two yards, I decided to make two separate control panels and made two birch plywood boxes for them.  Each box will mount an 11 inch by 5 inch Plexiglas panel.  There is an angle to the front of the box.  The panel will sit inside and two 4-40 size screws will hold the panel to the aluminum brackets that are near the bottom.  Because of the angle, the top of the panel is held by the box frame. 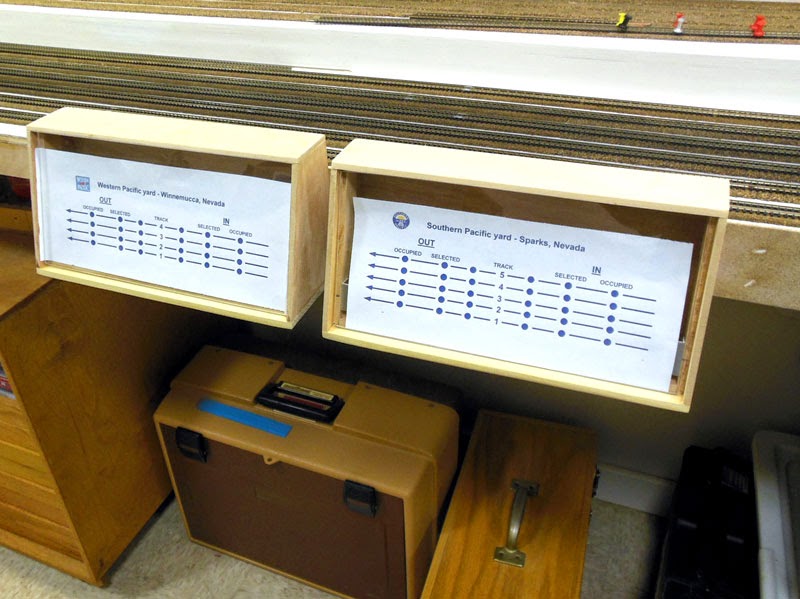 Here are both boxes temporarily mounted about where I plan to have them.  The Plexiglas panels have been prepared and sample track drawings placed behind them.  They stick out just a bit but all the tracks are still an easy reach.

There will be other control panels around the layout but those will be smaller and will be built into the fascia.

Posted by nscalestation at 5:29 PM No comments:

Installing fascia on the staging yard

I have often read in magazines about layout builders using Masonite or tempered hardboard for layout or lighting fascias but had never worked with it myself so I though it was high time that I expand my horizons and give it a go. 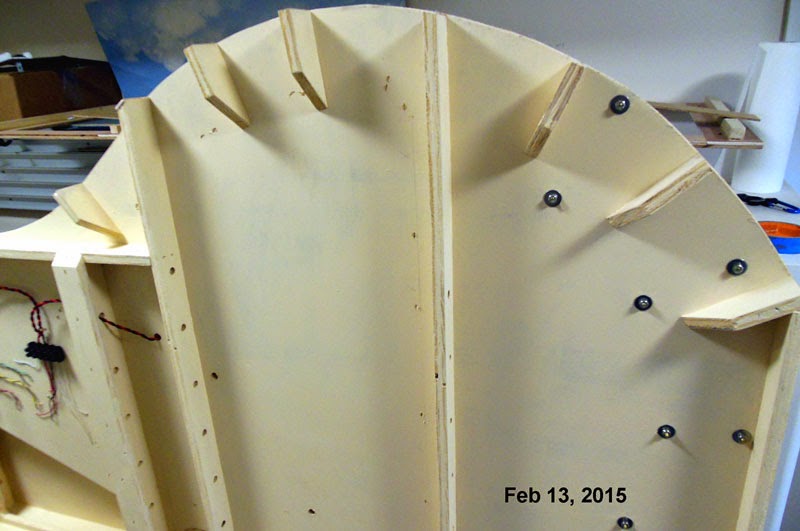 Around the balloon part of the yard where the return loops are, I installed a number of gussets that the fascia could be attached to in addition to the edge of the base. 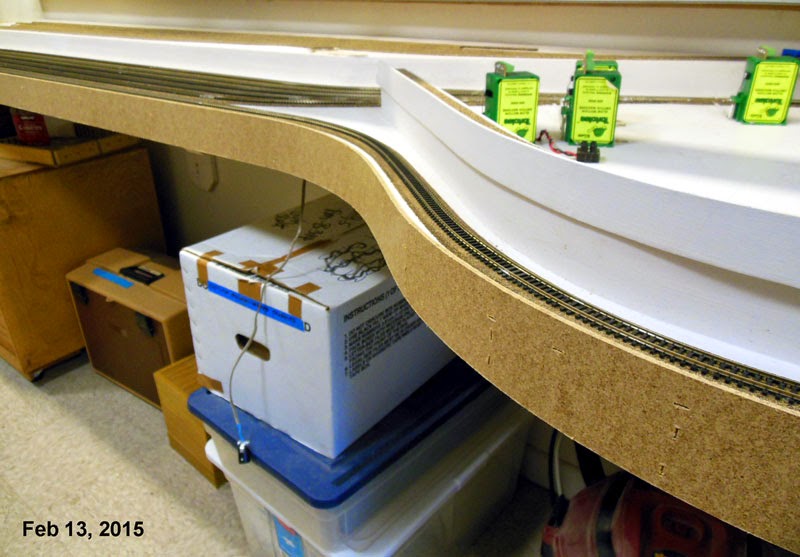 With the yard sitting on edge it was easy to apply some carpenters glue, set the strip in place then attach with my pneumatic stapler.  After filling the stable marks with Spackle and sanding, the fascia will be ready for paint. 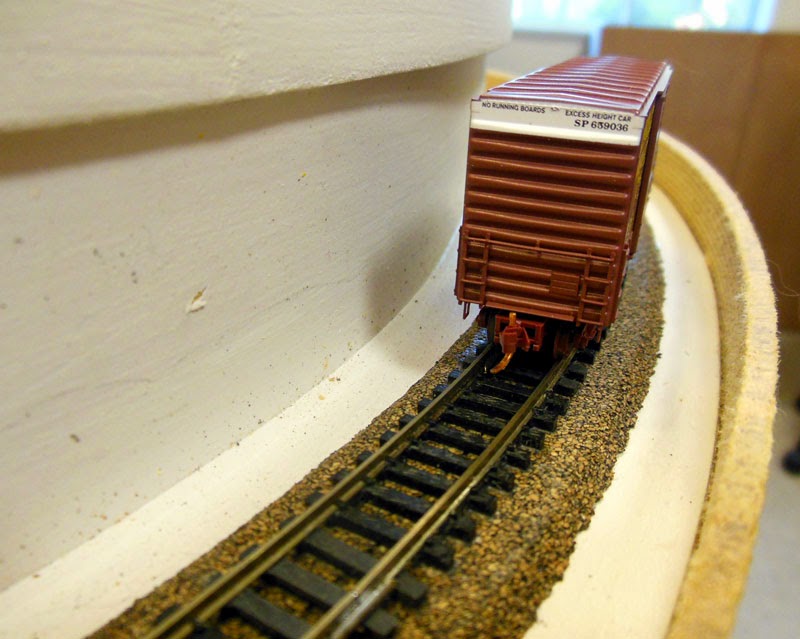 So far in all my testing of the yard with various type of cars, nothing had fallen from the layout.  But I just as an extra precaution I decided to leave a small raised edge on the fascia as the return track on the lower yard runs close to the edge.  I tested it with a short high cube box car as they seem the most top heavy.


Overall I am pleased with the result and found the tempered hard board to be easy to work with.  This bit of fascia is just a start as there will be an estimated 80 feet of layout edge and maybe some 60 feet of light valances needed as the layout progresses.  In the parts where there is more than one deck, the fascia for the upper deck will be extended to be the lighting valance for the lower deck.

In other progress on the staging yard, the return loop bridge for the upper yard has been painted and installed, and cork road bed has been started for the upper yard.  Evidence of some of this can be seen in these photos.  More later.
Posted by nscalestation at 10:48 AM No comments: