While I think of this layout as more of a rail fans layout than an operations layout, I still want to represent a few of the industries that are scattered along both the WP and SP lines in northern Nevada.  Most of these are related to mining and many are just truck transfer points which is perfect for modeling if you don't have much layout real estate. 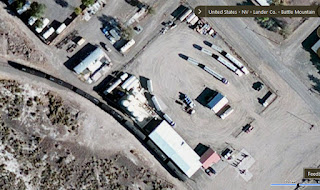 Here is an example of one such industry taken from Google Maps.  The biggest part of this industry is the area for the trucks to turn around or park. 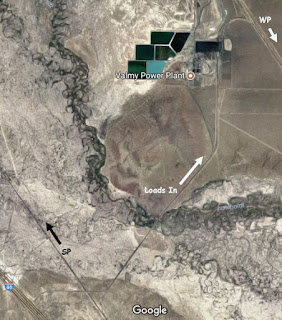 It had long been my plan to include the Sierra Pacific coal burning power plant at Valmy, Nevada as the largest industry on this layout.


Creating this return loop would require a good sized outward bulge in the bench work and creating a decent power plant in itself would be challenging.  Construction has progressed on the layout to the point where the power plant would be so it was time to make a decision about including the power plant.

While following both lines mile by mile through Google Maps it was noticeable to me that nearly all of the industries were served by trailing point spurs and few had any lead siding.   I did find one exception in Battle Mountain where there are several industries served from a long siding from the SP line.  So I have decided instead of the power plant, the next section of the layout will represent these industries.  This will allow the bench work to be kept narrow and give more variety of cars types that the local will handle.


Above is a quick drawing I did showing what this section might look like.  This section will be 8 feet long.  The WP line entering this section from the Gloconda section on the right is about 1-1/8 inch lower than the SP line and this difference can be used to separate the scenes.  It turns out that Sierra Pacific Power has a small maintenance yard in Battle Mountain and that can added as an off line industry.  Some interesting utility trucks, spools of wires, transformers, poles, etc.

There will still be some westbound loads and eastbound empties coal traffic on the layout as several cement kilns in California use coal that they receive by rail.  I have already started on the bench work for this next section which from now on will be referred to as the Battle Mountain section.
Posted by nscalestation at 10:16 PM 2 comments:

Catching up with some electrial projects 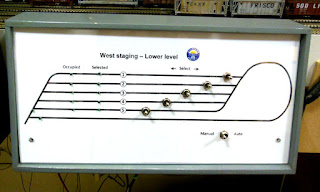 While finishing the helix, and the Wesso and Gloconda sections I had neglected to finish the controls for the lower or Southern Pacific staging yard.  Now with the ability to run trains around the layout that omission was really noticeable and I am  correcting it. 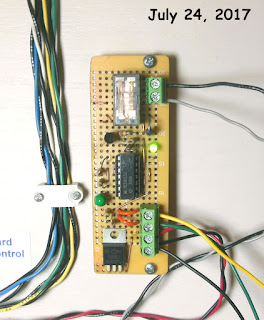 The yard is similar to the upper or Western Pacific staging yard but with 5 sidings instead of 4.  I am using another Digitrax DS-64 plus this little circuit I built to handle the turnout that makes the reverse loop.

This circuit uses a Set / Reset RS flip flop made from Nand logic gates to control a relay which controls the polarity of the voltage applied to the Tortoise motor.   One pole of the switches on the panel are wired a little differently so that in one direction the all send the thrown polarity and in the other they all send the aligned polarity.

The two tracks that now end after crossing the bridges at Gloconda will eventually connect to one another and form a return loop.   But that return loop is still 50 actual feet away and who knows how long that will take to build and I want to run trains now.

So the solution I came up with was to build a temporary return loop on a section that can be connected to the end of the last completed section and then moved when a new section is added. 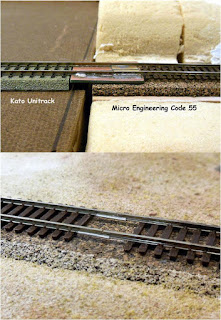 I used Kato Unitrack and spliced the Micro Engineering track to it with the same method presented in this post from last January.  The rail in the Kato Unitrack seems identical to the Atlas rail.

The other end of the adapter track was connected the end of the code 55 track on the finished part of the layout with tight Micro Engineering rail joiners and no solder.

Here is a simplified AnyRail track diagram of the layout as it is now.  This new section is at the far left and is the highest elevation. 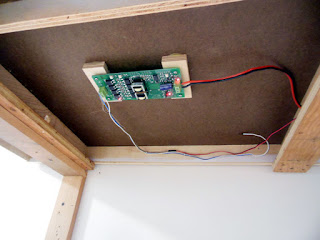 Connecting those two tracks created a new return loop.  A DCC Specialities PSX-AR was mounted under the section and isolation gaps included in the track at both ends.

It's great to finally be able to run full trains over the entire layout such as it is right now.
Posted by nscalestation at 10:32 PM 4 comments:

The railroads maintain signals and other track side infrastructure with trucks and those trucks often use crude dirt roads.

I show this reference photo again, this time drawing attention to the dirt service roads.  I had always planned to include this in the layout and seeing this photo I thought my modeled scene of this area would be a good place to start. 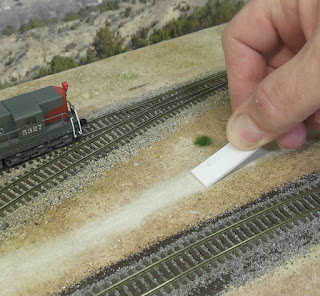 Remember that as a first layer of base scenery I had used sanded grout then added layers of Arizona Rock & Mineral, and Woodland Scenics scenery materials.  Using a scrap of styrene about 1/2 inch wide, I scraped off these upper layers to expose the finer and lighter bottom layers 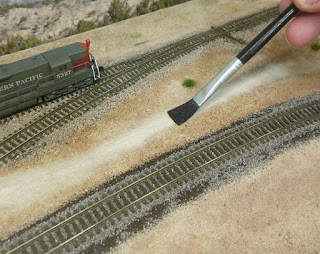 Then I sprinkled a thin line of the sanded grout and spread it along the path of the road with a brush but a finger also works.   The area was then given a coating of scenic cement or mat medium. 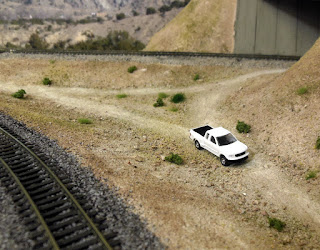 Besides using the contrast in texture to define the roads, adding some scrub brush in the areas where the road isn't also adds to the suggestion of a beaten path.  I have been using a combination of Woodland Scenics foliage clusters and Scenic Express prairie grass tufts. 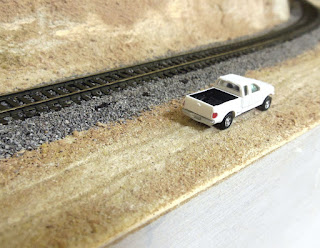 There will be those places where ruts have formed when the ground was wet and remain long after the rain is gone and the soil hardened.   I wanted to represent some of that in a few locations. 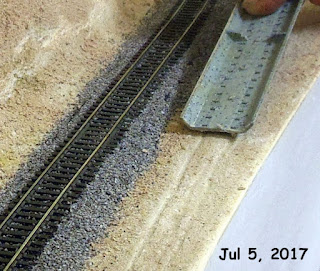 Where I wanted to create ruts in my service roads I had applied a thicker than normal layer of basic landscape material (sanded grout).  After that dried I dragged a scrap of Kato Unitrack over the path of the road as shown here. 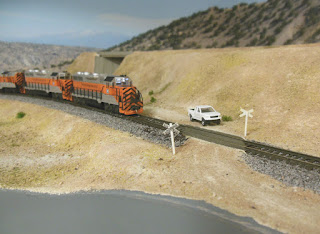 The roads done so far cross the tracks in 2 places.  I used angled wood grade crossings from Blair Line at these locations and added some RR crossing signs left over from the old layout and used those. My experience has been that these are the most vulnerable details so I had better make up some more for spares.
Posted by nscalestation at 9:48 PM 4 comments:

The Western Pacific track will exit the west end of the layout at the US 95 / Melarkey Street overpass in Winneumcca and then enter the helix.  This overpass is a two lane road. 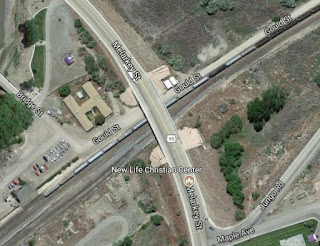 On the prototype this bridge is about half a mile away from the I-80 overpass that the Southern Pacific track passes under but with the compression necessary in the model world it is only about 700 scale feet away.  Also I am representing the line as a single track where as in the real location it has become 2 tracks plus a siding. 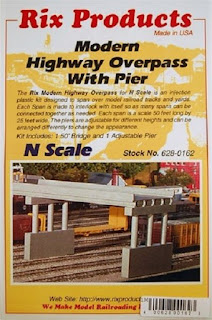 The overpass was made from leftover parts from a Rix Products kit.  I have used and re-used several of these kits on other layouts.  The clever design of these kits make them easy to modify to fit almost any situation.  While primarily an HO manufacturer, Rix Products does make several other N scale injection molded kits.

This company also makes modern concrete barriers as a separate set and I have ordered some of those for the Interstate highway. 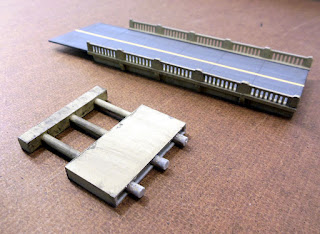 Here is the small bridge assembly I put together to represent the Melarkey street overpass.  I used extra roadway sections to extend the road onto the top of the hill.

One pier was assembled and it's height adjusted to match the retaining wall on the hill. 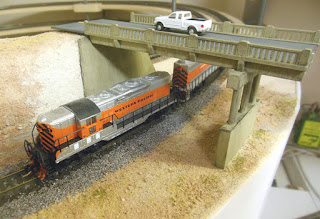 Here is the bridge temporarily set in place.  The short lengths of round column seen the the prior photo fit into holes drilled in the bench work.

There is still much left to be done on this scene, the biggest part being the creation of a back drop.

Posted by nscalestation at 1:56 PM 2 comments: