This past year of course has been a very challenging time for almost everyone.  I do feel fortunate that I have this layout to keep me busy doing something creative and that helps ease the feeling of "cabin fever".  With all train shows and conventions being canceled this year and being home all of the time I have been able to enjoy more model railroading time than I would have normally.  And with no shows I was not motivated to work on any modules so all of that time went into this layout.  Besides working on the continuing expansion of the layout I was also able to finish some side projects on various other parts of the layout.  Here are some of those projects with links to posts made on them:

This winter I am again participating in the annual Trainboard.com Winter Layout Party.  I have noticed that there seems to be more people participating this year so I must not be the only one spending more time with their layout.

Already the N Scale convention in Sparks, Nevada that was scheduled for next June has been canceled and I suspect that it is going to still be some time before it will be safe to travel or have train shows again.   Until then, I'll just keep working on my railroad.

Posted by nscalestation at 12:21 PM 2 comments:

The crooked path across the bridge

Back in June I posted about the lift bridge I had constructed across the entry into the train room, that post can be seen HERE.  After six months and changing seasons it has remained quite stable.  With this current layout expansion the bridge will be needed so now to put some track on it.   The idea of my bridge is to use tunnel portals and hillsides to hide the bridge being in the scene.

The actual Palisade tunnels that this part of the layout represents on are on a straight alignment but I am going to take some liberties with the track alignments through these tunnels to make my track plan work.   The tunnel portals on the right or west side are angled to allow for a larger radius curve around the corner. 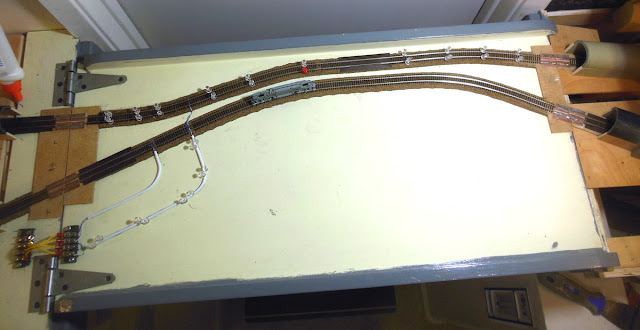 At the points where the tracks meet at the gaps I am using copper clad PC board as these will hold the track very stable.  I was able to buy the material on ebay in a 2" x 6" size and then cut it into 1" x 2" sizes.   These were then cut at the angle that the track will cross the gap.  Each of the 4 track / gap angles are different.  Holes were drilled on both sides for track nails and a groove was cut through the copper cladding to isolate the rails. 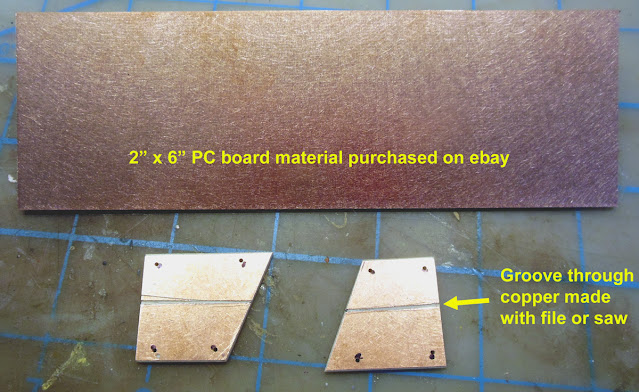 On the lift bridge we built many years ago at the Ntrak club, we used Atlas code 80 re-railer tracks at the gaps.  The idea was that if a set of wheels gets derailed at the joint it will get re-railed right away.  This has worked out well so I wanted to try the same idea on my layout's lift bridge.  A friend had recently given me some Atlas code 55 re-railer tracks and the rails were a perfect match for the Mico Engineering track I am using.   Traffic will move mostly in one direction on each track so the re-railers are placed the side after the train crosses the gap.   Another lesson learned from the Ntrak bridge experience was to round the tops of the rail end a bit.  This helps with smooth running but also with a shirtsleeve being snaged when someone goes through and pulling up the track. 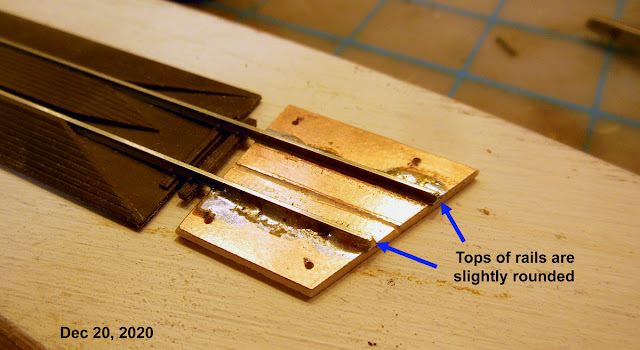 The gaps were done in pairs on the work bench with the second one being done with a tracksetta tool in place to hold the alignment and the track gauge was carefully checked with both an NMRA track gauge and a caliper. 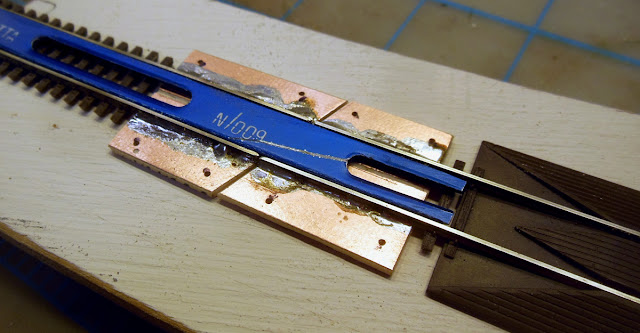 So at this point the   track is in place and everything seems to roll smoothly over the joints with no derailments.  After the holidays I will post about the electrical aspects of the bridge. 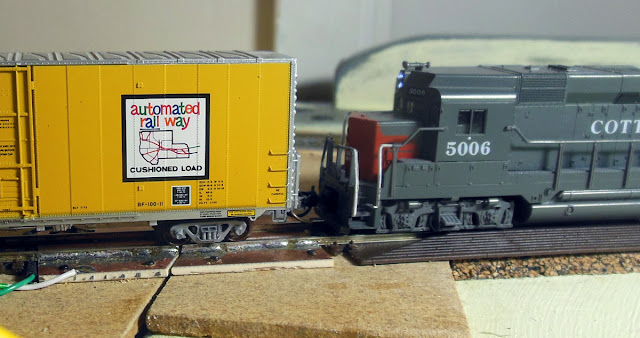 Posted by nscalestation at 9:49 AM No comments:

The sub-roadbed has been completed through the new Palisade Ranch section of the layout and the cork roadbed is well underway.  So now I am also working on adding the river bottoms and the land forms.  This needs to get fairly far along before I install the track and bridges especially toward the back and under the bridges.  The bench work frame is only 2 inches thick here and the river will be at the top of that frame so strips of scrap were glued onto the existing structure of the bench work to create support for the river bottom. 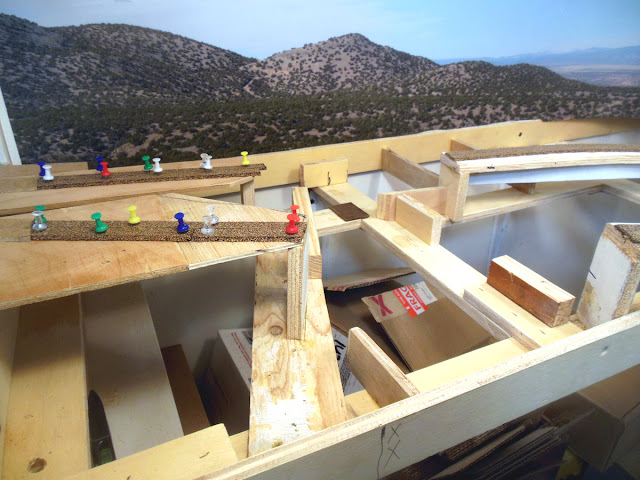 Next the river bottom made of hard board was glued into place on top of those supports.  The river will round the corner around the corner to the right and disappear behind the built up track. 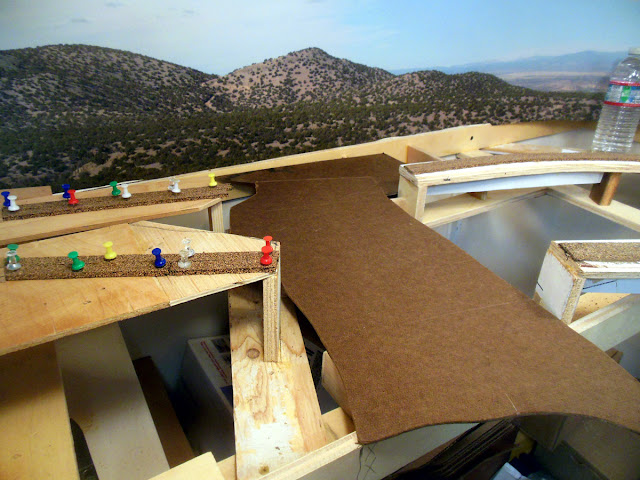 I am using similar methods for the terrain as I have before on this layout.  For some of the terrain I am using building insulation foam board.  Along the back of the scene the hills will be built up to blend in with the backdrop.   This will then be covered with a layer of plaster cloth.  A long sheet of .030 styrene is slipped in front of the backdrop to protect it while all the scenery work is going on. 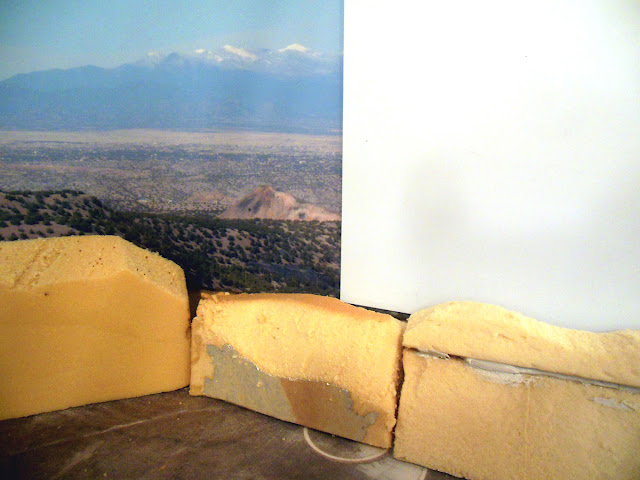 In some larger areas I use the plaster cloth over cardboard strip method.    The cardboard that works best for me is from Postal Service Priority Mail boxes that items sometimes come in.  It is corrugated but thinner than most corrugated cardboard.  I cut it into strips about 1/2 inch wide across the corrugations so it will bend easily without any sharp kinks.   The ends are glued with yellow carpenters glue and either pinned or clamped to the surrounding structures.  Areas like this usually get 2 layers of the plaster cloth. 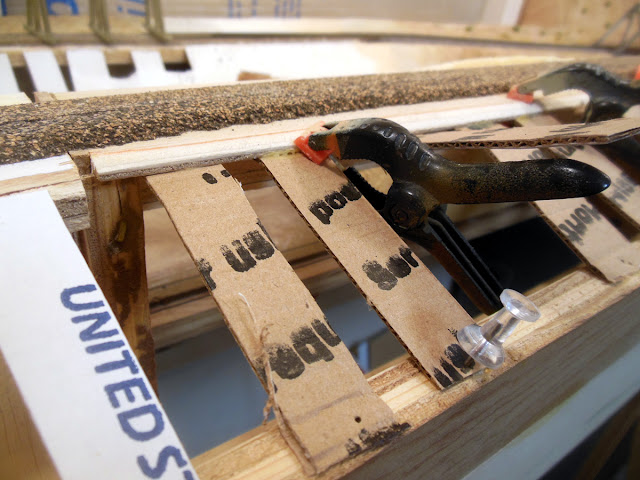 Posted by nscalestation at 1:54 PM No comments:

Plan and start for the new section

In a post on October 31st I had shown a prototype photo of what the next section of the layout will represent.  Here is another photo of the same area taken from just above the tunnels on Palisade Ranch Road that I like to use as a reference.  I suspect that the road access is the reason that this is one of the most photographed areas on this line and so I am calling this section of the layout the Palisade Ranch section.  The through truss bridges in the distance is in the spot that the concrete trestle will be on the layout. 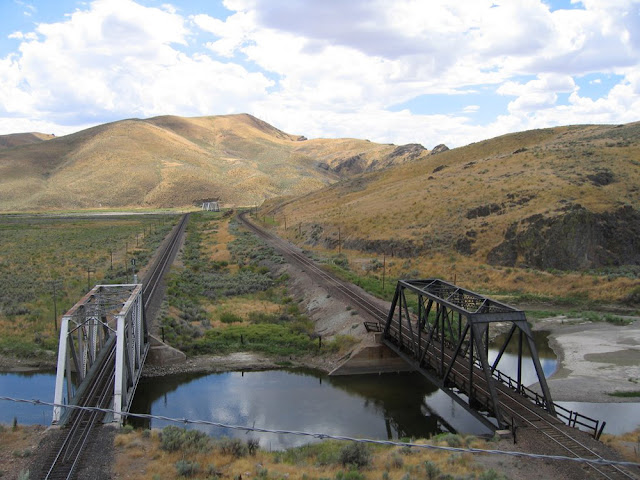 In planning this new section I used some red rosin paper left over from a painting project and cut a section of that to match the shape and size of the new area to be modeled.    Laying it out on the floor I bent some track to the desired radius and laid them in place along with the bridges and tunnel portals that had already been built to get an idea of what I could accomplish in this space.  With Sharpie pen I drew in the key features.

Of course my model of this scene is going to have to be quite compressed and is going around a corner.  I want to include Palisade Ranch Road in this scene and that is indicated by the yellow line drawn in with Photoshop over the tunnels.  The location of the curved concrete trestle is also pointed out with yellow. 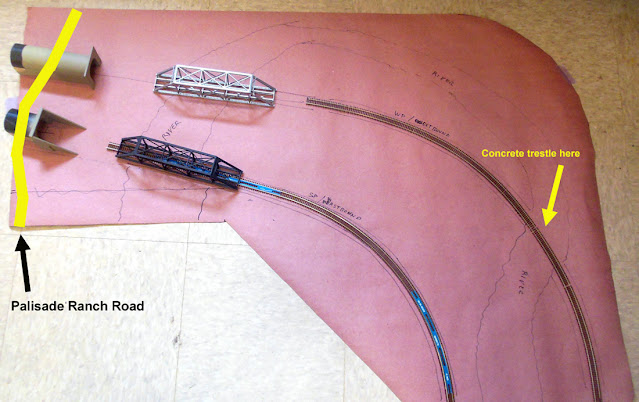 Construction on this new section is moving along.   There was already the basic structure in place that was supporting the temporary turnaround loop so working off of that all of the sub roadbed for both lines has been established.  Cork roadbed is now being installed and next will be the river bottoms and then some terrain can get started. 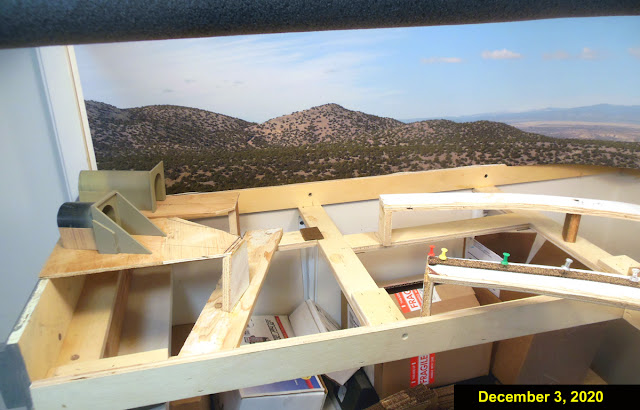 Posted by nscalestation at 11:25 AM 3 comments: