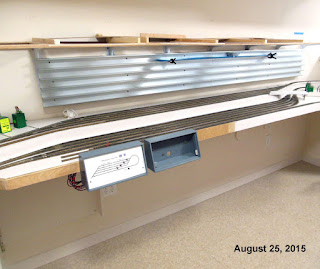 Since my last post about a week ago, I got the staging yard permanently installed in the layout. Prior to installing the yard, I removed the display case and the support brackets for the upper deck so I could spray paint the brackets white. 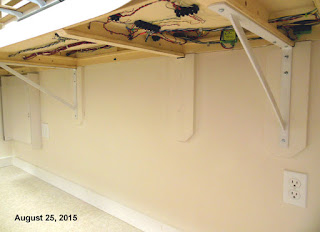 The yard is secured to the walls and also is supported by two large sturdy support brackets.  A third bracket was planned but after the first two were in I decided a third was not needed.  Spacing is 48 inches between brackets.

Also did some paint touch ups on the wall in this area. 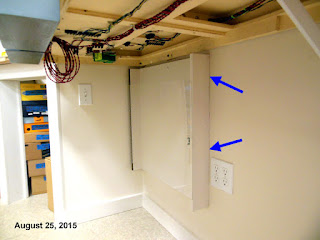 I prefer not to mount all the electronics under the bench work so I used a left over 2 ft square piece of 3/4 inch plywood to make a place for wall mounting of the circuits.  This is at the entry end of the yard and has a hinged Plexiglass door to protect everything.  More on this in a future post.

With double ended yards, turnouts can be controlled in pairs as long as there is sufficient power from the controller for it.  I am most likely going to use the Digitrax DS64 stationary decoder to control the routes and turnouts for this particular project and have tested it and know that it's output can handle it.

This drawing represents how the turnout motors are wired in pairs to the outputs of the stationary decoder.  Green squares represent Tortoise machines.  Pairs 2 and 3 will be wired to outputs 2 and 3 but were left off for clarity.


I used 22 gauge stranded wire for this part. A different color wire twisted with a black wire is used for each pair of turnouts.  I normally like to use Euro type terminal strips for my under layout wiring but as I had so many of the standard screw type in a box I decided to use these for the turnout control wiring. 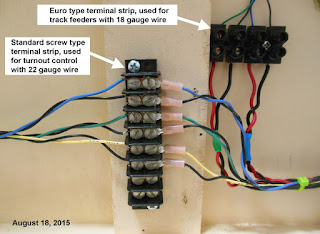 This photo shows the terminal strip at the entry end of the yard with wires going off to each of the Tortoise motors. The extra screws will be for the entry turnout that forms the reverse loop.

The 22 gauge wire can either be tinned and bent around the screws or a lug can be crimped on, both ways are shown here. 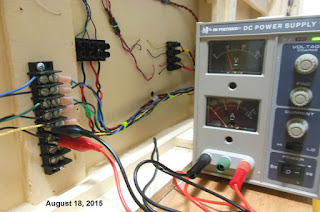 This photo shows how I am  testing each pair with 10 volts from a DC power supply.

After the yard is installed, the connections to the controller will be made from this terminal strip. 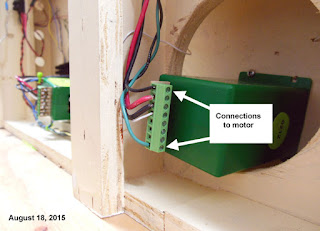 If it is discovered during testing that one turnout of a pair is operating backwards, then it is easy to reverse the connections at that turnout as shown in this photo.

At this point all of the track and wiring that can be done with the module on it's edge are done and it's time to install it in it's place in the layout.
Posted by nscalestation at 12:59 PM 1 comment:

Evolution of a control panel layout 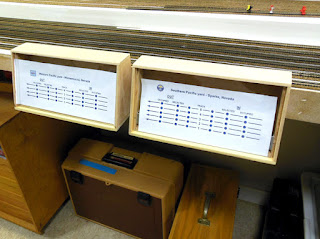 Since then I have defined more specifically what I want the control panels to do.


On all of the drawings below the big dots represent toggle switches and the small ones represent small LED's.  In this post I am addressing control for the smaller of the two yards, the WP / UP on the upper level.

This is the most basic idea I had for the layout of the control panel for the WP / UP staging yard on the upper level.  This is very similar to what is shown in the first photo.

One problem I had with this panel layout was how to control and show the position of the first turnout at the entry the yard where the return route branches off.

Using momentary center off ON/OFF/ON type of toggle switches 8 routes could be selected, 4 with the entry turnout aligned and 4 with it closed.

This final version is a more accurate representation of the actual track plan.  The positions of the toggle switches is offset to make access easier.


A spot for a Manual / Auto switch is added for future automation plans. 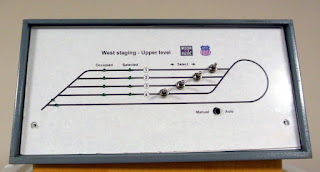 Here's the finished control panel for the WP/UP staging yard.  The boxes have been spray painted with Rust-Oleum smoke gray.

I still need to finish the panel for the SP yard and wire both of them into the yard.

Posted by nscalestation at 4:35 PM 2 comments:

With the last of the track and turnouts installed and tested on the staging yard module, it was time to finish the wiring.  I know lots of modelers hate wiring but I actually enjoy it.  Even with DCC, there is still a lot of wiring.  The wiring on most of this layout will be relativity simple but this staging yard has the highest concentration of it. 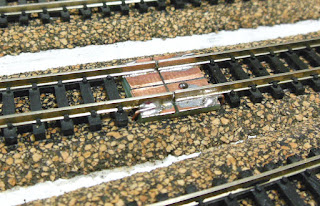 I have found those isolation plates I made to be a great place to connect the feeder wires to.  Almost all of the feeders needed were connected to one of these.

The feeders for the turnout frogs were soldered to the tie that passes through the center of the frog. 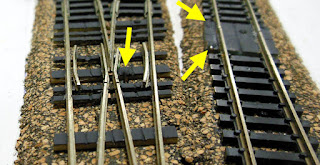 After the PC ties and isolation plates were painted weathered black, the feeder wires which are pointed out with yellow arrows in this photo are hardly noticeable. 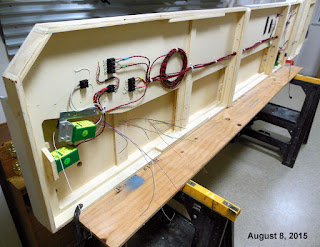 An advantage of building the bulk of the yard as a module is that most of the wiring can be completed with it standing on edge.  I use saw horses with a 2 ft wide scrap of plywood and clamp the module frame to plywood for stability as shown in this photo.  The plywood gives me a place to put the tools and I can even do the work from a chair and be comfortable.


Although I am using DCC and may someday learn to use some sort of more sophisticated JMRI type of computer control to route trains or do some automation I'm not there yet.  So I am keeping my options open and have each yard siding isolated from the main line.  I have installed 22 gauge feeders to both ends of each siding and to each isolated section of rail in the yard ladders,  that's a lot of feeders. 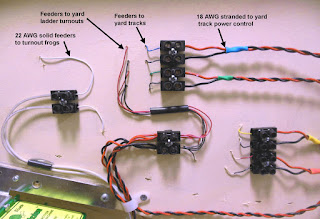 I try to use the same color wires for each type of connection.  In this photo, the sidings have either red, yellow, green, or blue wire or wire markings.  White was used for the frog feeders.

It takes a bit of discipline but pays off with easier trouble shooting or modifications later.
Posted by nscalestation at 10:53 PM No comments:

It's been almost a month since I posted anything on this blog so just a quick update to let everyone know I'm still active on this layout.  While I've been busy with other things, I have been able to do a little bit more work on the staging yard and am getting close to having all the track work done. 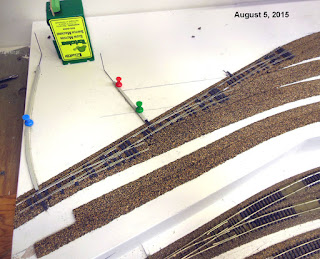 Seen in this photo the entry end of the WP staging yard now has paint and cork and I've built up a 3 turnout yard ladder.

The project going on when I took this photo was to install the linkages between the turnouts and the Tortoise motors.  The Tortoises will be mounted upside down the way I did on the loop end of the SP yard.

Posted by nscalestation at 12:14 AM No comments: