Although this layout is going to be run with DCC, I still need to have some separation of sections in the layout for power districts and reversing loops and in the staging yard I wanted to isolate all of the staging tracks from each other.  In the past I had done this by using insulated rail joiners but this time I wanted to try something different. 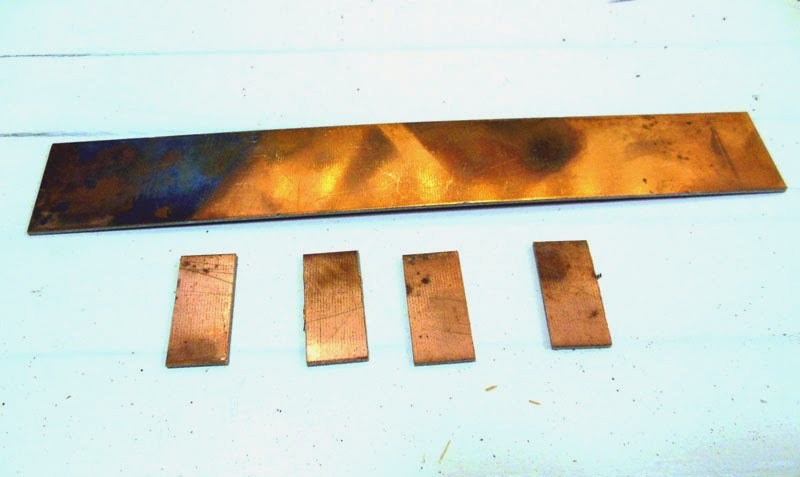 At a local electronics surplus store I purchased several scraps of .060 thick printed circuit board that were about 1-3/8 inches wide by 12 inches long.  I then cut these into 5/8 inch sections as shown in this photo. 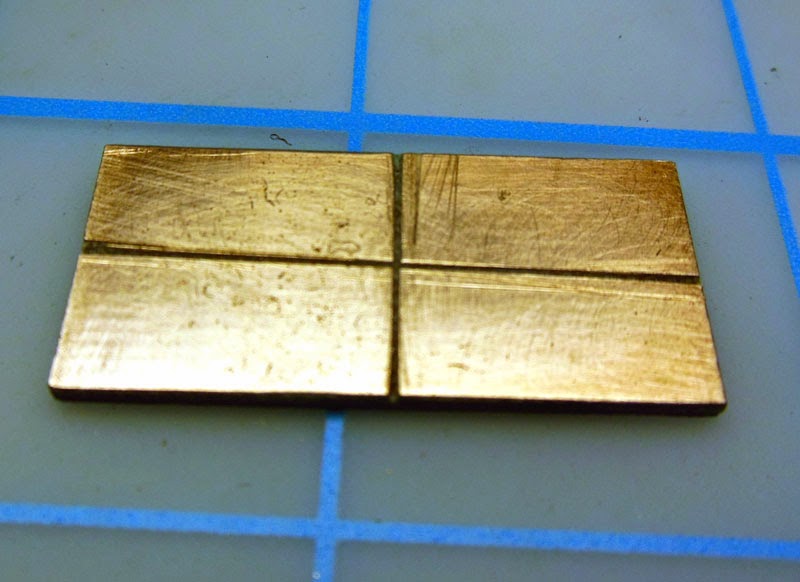 Then using a triangular file I file through the copper clad about in the middle in each direction leaving a pattern of 4 quarter sections as shown in this photo. 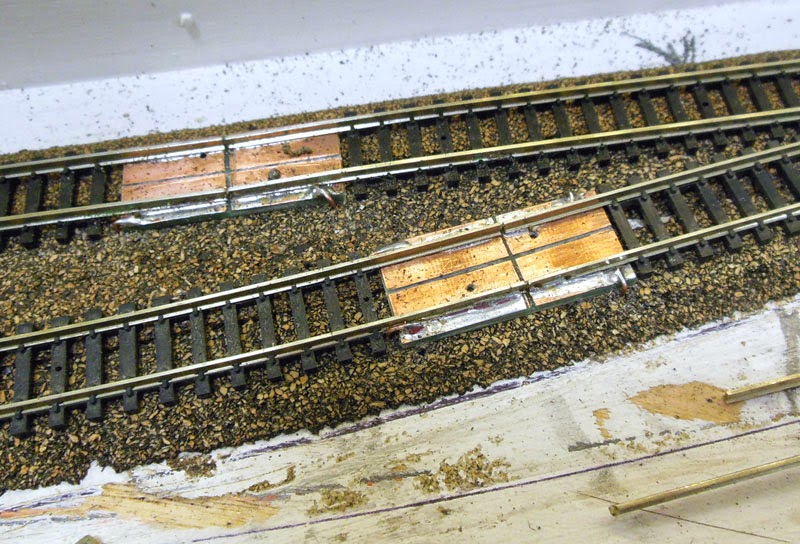 The plastic ties were removed from enough of the flex track to expose enough of the rail to reach the gap in the PC board.  I also drilled small holes in these plates to accept track nails.  When I started to install feeder wires I found out that these are also handy places to solder those to.

At this point I have these installed at the loop end of each staging track for a total of five.  While I am still de-bugging a few things on the turnouts, these rail gaps have been 100% derailment free.
Posted by nscalestation at 8:26 PM No comments:


After building several more turnouts for the staging yard, it was time to actually lay some track and install some turnouts so things could be more fully tested with powered locomotives and some trains of various lengths.  With the cork already in place for the rear staging track, around the return loop, and the return track in the front, that is where the first track has been installed.  There are a pair of left hand turnouts on the back track.  Linkages and un-powered Tortoise machines were also installed to hold the points. 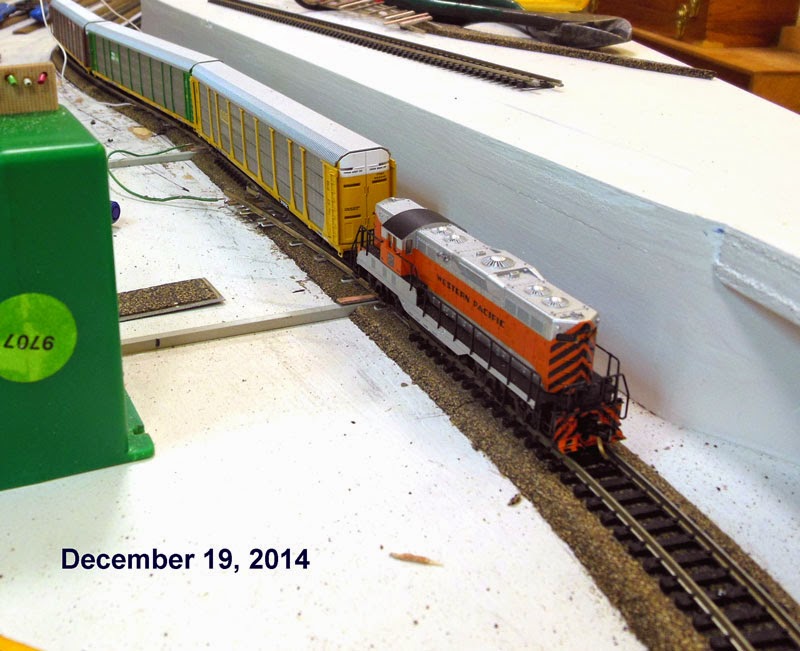 First engine to run on any part of this layout was one of my WP GP-7's, shown here pushing a line of 89 foot auto racks through the aligned points of one turnout then the diverging points of the second turnout.  As the longer wheel base cars seem to be the most demanding, I'm testing with them first.

At first there were a few hangups but after tweaking a few things on the turnouts everything is running smoothly.  What is learned from these tweaks will be applied to the turnouts yet to be built.  I will be testing like this with different types of engines and freight cars. 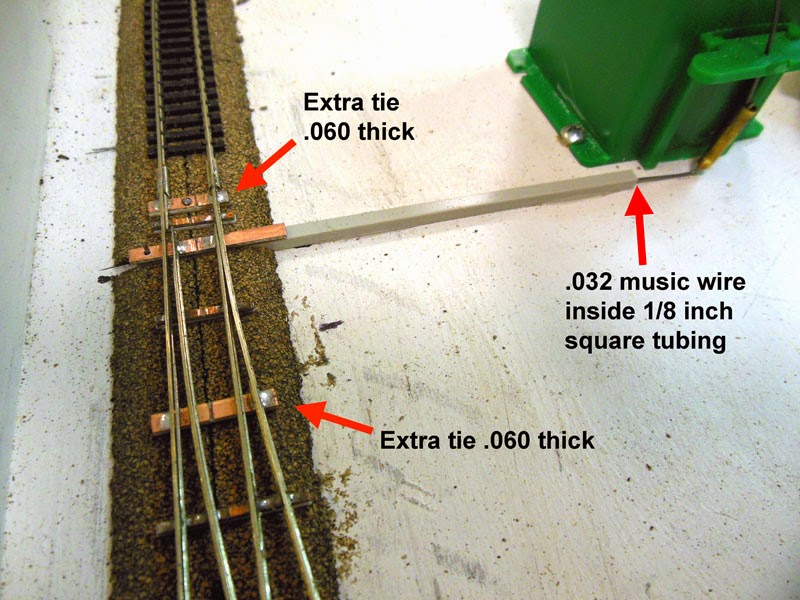 These yard turnouts are not quite stock.  First of all they are made with code 80 rail to match the Atlas track I am using in the yard.  After building with the standard ties in the fixture, I have added several larger ties both to get the height up to match the Atlas ties and to be able to use track nails to hold the turnout in place.

The method I am using in the staging yard to control the turnouts is to mount a Tortoise motor upside down.  The wire in the motor is cut off at about 1/8 inch from the table top.  A linkage wire passes through a 1/8 inch square tube between the turnout throw bar tie and the Tortoise motor.  Each end of this linkage wire is bent up 90 degrees with one end linking to the throw bar tie and the other end coupled to the Tortoise were by a brass tube.  This way everything is accessible from above. Covers will be made later to place over each group of Tortoise motors.

Posted by nscalestation at 9:08 PM No comments:

Back in February I posted about my experiences so far with the Fast Tracks turnout system.   Where I left off was that I had built a few turnouts, both code 55 and code 80 and was looking at ways I could test them before actually installing them on the layout.

As the first part of the layout that is going to get any track is going to be the main staging yard, I have been spending some time building more code 80 turnouts and trying to fine tune my technique.  I recently added the Stock Aid Tool and Rail Bending tool to my Fast Track arsenal and have seen some improvement in my results with each tool added.

I did build a testing setup on a strip of plywood that is shown in the two photos below.  Just a un-powered Tortise motor to hold the points in place and a fixture made of styrene to hold the turnout.  The flex track is connected to the turnout with rail joiners. 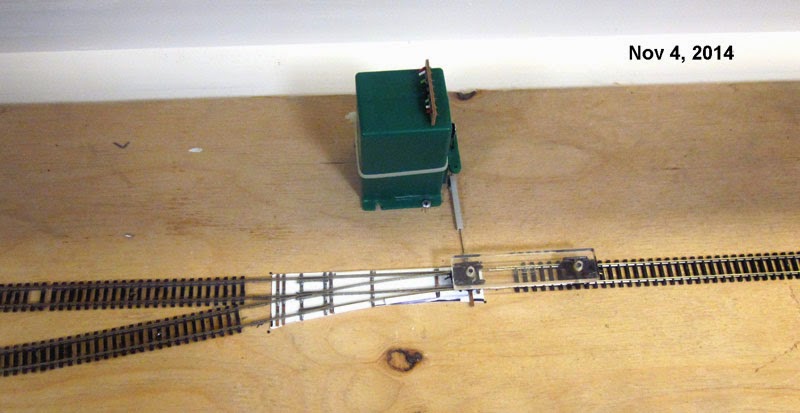 Here is an overview of one of the turnouts being tested.  That's my Aztec Mfg. track testing car passing through the turnout. 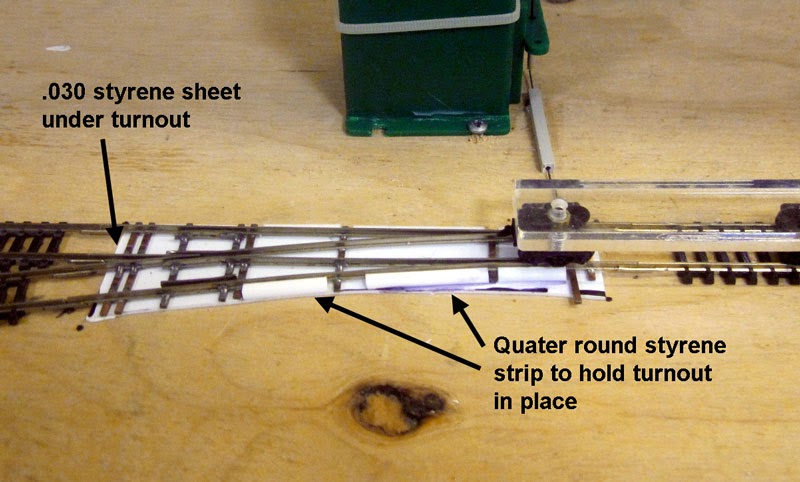 Here is a more detailed view of how I built the fixture to hold the turnout.  This testing was all done before any additional ties were added.  This turnout was done with Atlas code 80 rail.  The thickness of the test fixture brings the ties up to the thickness of the stock Atlas ties.


This turnout building is more fun than I thought it would be.  The first couple were done while repeatedly watching the Fast Tracks videos on Youtube but now I can do them on my own and much more quickly.  The few turnouts I tested this way seem to work just fine rolling various freight cars through them.  I realize that in the staging yard I will need to raise the turnout up to .060 to match the thickness of the Atlas track.  I working on some ideas of how to do that and when that's figured out, I'll be actually installing some of these in the staging yard.
Posted by nscalestation at 6:30 PM No comments: