After starting the curved steel trestle back in October it has taken quite awhile for me to get back to finishing it.  Now that the lower track has been completed and the scenery around the back of the corner is almost complete, this bridge can be finished. 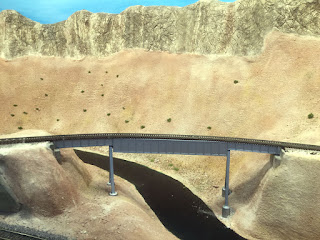 The bridge pieces were assembled and then painted with the air brush.  I had been using Floquil old silver for some of my bridges but finally had run out and of course the Floquil line is no longer available.  Turns out that Model Master aluminum is a very close match so that's what I used this time.


I had used Micro Engineering bridge track for the first time on the 200 ft BLMA through truss bridge.  Because that bridge was straight and access to the track would be restricted I chose to fully assemble and paint the track with it's guard rails and guard timbers before installing it on the bridge.  This time I did make up a section of bridge track with both ends having standard ties but am going to wait until after it is installed to add the guard rails and paint. 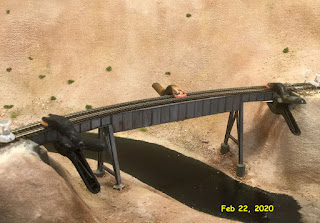 The bridge was weathered and installed on the layout.  Then the track was attached to the bridge with E6000 adhesive and held with small clamps while the adhesive set.  The position of the track on both ends of the bridge was held in place with map pins. 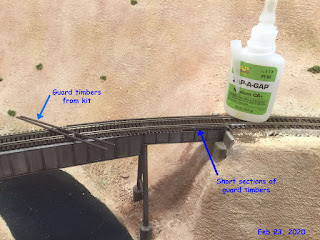 The guard timbers were attached to the track the same way they were on the 200 ft BLMA bridge but this time cut into shorter lengths to match the curvature of the track.

Posted by nscalestation at 8:43 AM 2 comments: 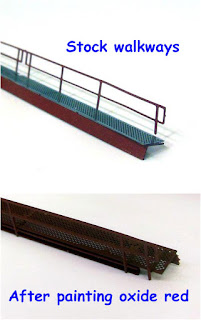 These bridges come with some nice stainless steel walkways and railings.  The hand rails are painted an oxide red color that has a semi-gloss finish.

For me it did not seem right to have a bright or glossy finish on a bridge that could be 80 years old in my modeled era.  So I did the same thing that I had done on the 150 ft bridge before installing it  about a year ago on the Harney layout section.  I removed the walkways and air brush them flat oxide red. 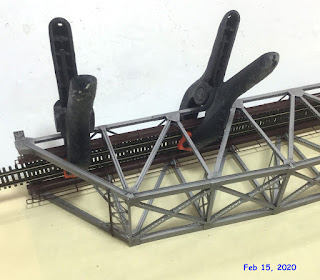 The Micro Engineering track assembly completed in the LAST POST was attached to the bridge structure by placing a bit of clear E6000 adhesive on the tops of the bottom frame of the bridge and then holding with clamps as shown in this photo.  It was important to keep the track centered between the walkways. 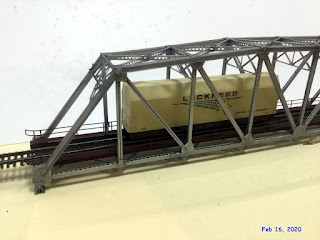 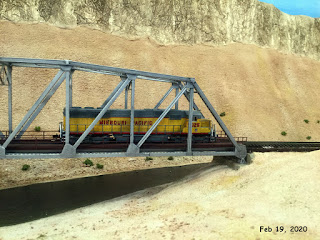 On the Harney layout section I had weathered the bridge with black acrylic wash before installing it but this time found out my weathering wash had dried out so I installed this bridge first and will weather it in place.   The track was then glued to the road bed and connected.

Posted by nscalestation at 10:25 PM 4 comments:

As I prepare to install the 200 ft BLMA through truss bridge I needed to first prepare the track that will be inside the bridge. 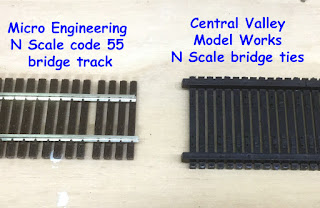 On the 150 ft BLMA bridge I had used a Central Valley Model Works bridge tie set installing it in the center of a section of Micro Engineering code 55 track after some standard ties were removed.  That project was covered in THIS POST. 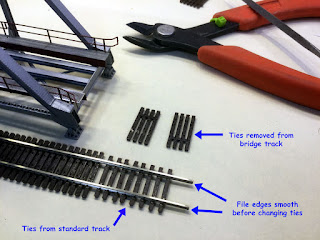 For this bridge I did just the opposite, removing some of the ties from each end of a section of bridge track and replacing them with ties removed from the standard track in the last project.   The ends of the rails must be nice and smooth to for the ties to slip off and on. 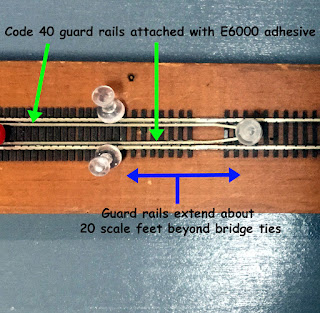 I laid the track out nice and straight on a soft pine plank and pinned it to hold it straight.  I also added a short section of standard track onto one end.  The bridge kit set comes with a pair of code 40 rails to make the guard rails.  I attached these with E6000 adhesive spread on the bottom of the rails. 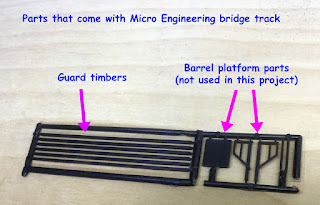 Also included with a section of Micro Engineering bridge track are several sets like this one that have guard timber sections and parts for a barrel platform.  I only used the guard timbers attaching them near the ends of the ties with ACC adhesive. 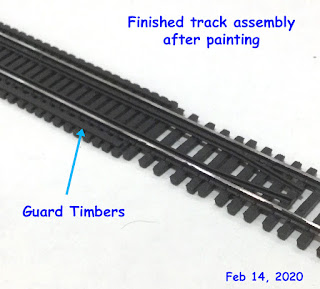 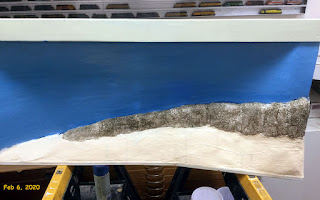 The rock casting work and most of the scenery work was done with the box out of the window and sitting on saw horses.  Being able to tilt the box at various angles made adding the scenery material easier. 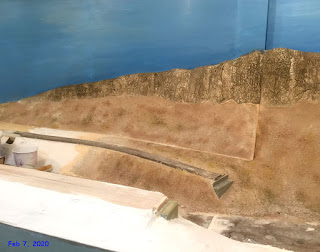 While the scenery window box was being worked on at the saw horses I was also working on the scenery around the area of the window.  This photo shows how the area looked after both were dry and the box was installed. 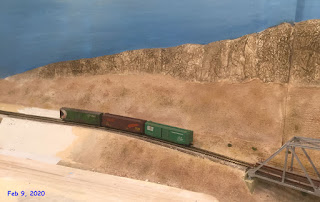 To better blend the scenery another application of scenery materials was done on while the box was in place.  I have temporarily set the bridge and tracks in place to show how this scene will look with a train going through it. 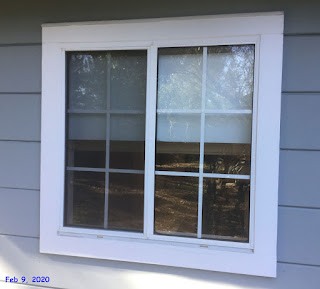 This is what it looks like from outside the window.  The back of the scenery box was painted with the white house trim.  I may also paint the parts of the main bench work visible in the window the same color.

Posted by nscalestation at 3:28 PM No comments:

Progress on the scenery window box 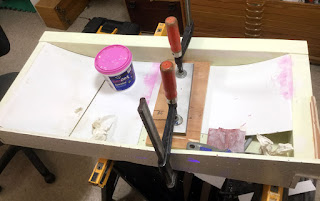 Work continues on the scenery window box in the Palisade Canyon section of the layout.  To round out those sharp corners in the box I installed some plastic paneling attaching it with Liquid Nails adhesive. 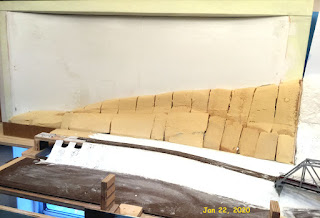 The hillside was built up using pieces of insulation board to create a continuation of the canyon wall.  Liquid Nails adhesive was also used to secure the insulation board. 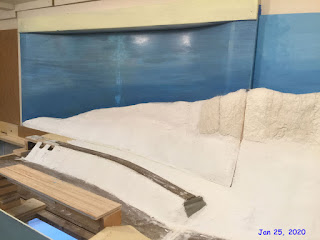 Then the insulation board was covered with plaster cloth.  The rock formations along the top are now being added and the plastic panel sky board got it first coat of paint.

Posted by nscalestation at 8:32 AM 2 comments: