Over the past couple of weeks I've been installing the turnout motors and controls.  For the interchange at Wesso there are three different possible routes.  The three drawings below illustrate the three conditions.  The SP traffic is shown in red and the WP traffic is shown in orange.

All turnouts aligned for SP westbound and WP eastbound.

Looking at these drawings I realized that the turnouts could be operated in pairs and only require two control outputs.  I wanted to use push buttons this time and wanted an indication of which of the three conditions was active. 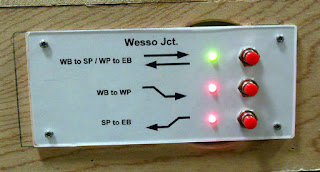 The control panel I came up with uses the same method used for the staging yard control panels but with simple graphics instead of a track diagram. This will have a more finished look to it once the fascia board is installed. 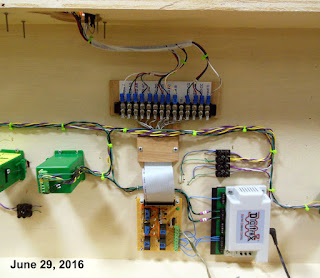 My push buttons are only Single Pole Single Throw (SPST) so I needed to build a small circuit for Double Pole Double Throw (DPDT) relays and for logic to control the LED's on the panel.  I used an old ribbon cable for a floppy drive to connect the board to a terminal strip which then connects to the panel. 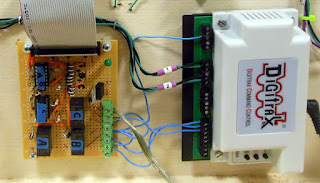 Here's a closer view of the circuit I made and the DS64.   Only two outputs and 3 inputs of the DS64 is being used but I may use the remaining inputs and outputs to control turnouts on the eastern staging yard that will be directly above this module. 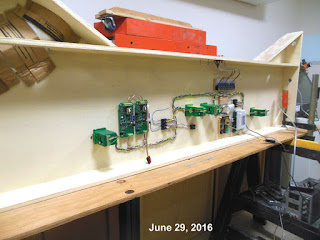 Again I am doing all the wiring before installing the module into the layout.  Here is the module laying on it's back where I can sit on a stool to comfortably do the work.  Temporary connections are made to power supplies and Loconet. 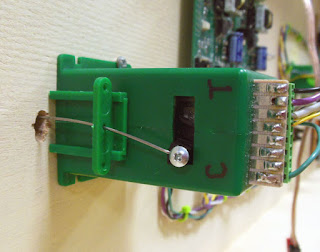 I have been marking my Tortoise motors with a "C" for closed and "T" for thrown as shown in this photo.  This helps when you can't easily see the turnouts to determine position while working on the controls.

Posted by nscalestation at 10:13 AM No comments:

Trying out a new ballasting technique

With the track on the Wesso module all done and tested it was time for ballast.  I plan to finish the module as much as possible up to about 6 inches of the ends before installing it permanently in place on the layout. 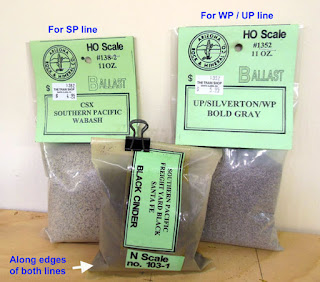 I normally like to use HO ballast for track to have a contrast of texture with the N scale ballast I use for such things as gravel roads.

For this layout I have selected the Arizona Rock & Mineral products shown in this photo.  The eastbound and westbound lines will use different color ballast representing two different railroads. 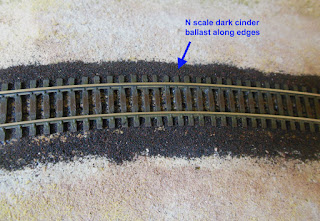 On the back of the labels on the bags of ballast it was suggested that first placing black cinder ballast along the lower edges would result in a more realistic looking roadbed.  I used N scale black cinder for this part.  This photo shows a section of track with only that ballast applied along the edges. 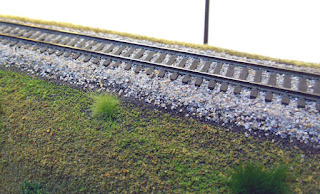 Before starting the ballast on the layout I had tried out this technique on a diorama. A section of the finished track on the diorama is shown in this photo.  Any bare spots show the underlying smaller, darker ballast and not the cork.


Also I noticed that having the N scale ballast secured along the lower edges of the road bed help keep the main ballast from eroding when applying the 50 / 50 white glue and water solution.  So I would have to say that I do like this technique and plan to use it on this layout.
Posted by nscalestation at 10:27 AM No comments:

First scenery on the layout 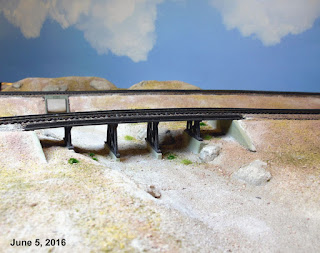 Most  people get the track all done before starting any scenery and I normally do the same.  This time with the ballasted wood trestle on the Wesso module I felt that I needed to get the scenery done in the areas that would be directly under the trestle before installing the trestle. 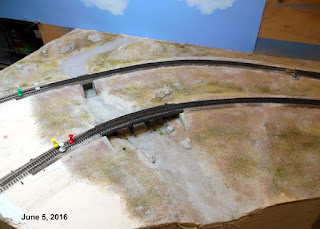 Here's another shot at a higher angle showing a larger area.  Once I got started doing scenery I got a little carried away and ended up doing almost half the module.   Track is all in, wired, tested, and painted.  Next will come the ballast then some touch ups the scenery.
Posted by nscalestation at 4:50 PM 2 comments: