The Wesso section has been bolted into place and the cork road bed installed on both line connecting the road bed between the helix and the Wesso section and it was time to make the track connections. The Atlas code 80 track from the helix would need to be connected to the Micro Engineering code 55 on the visible parts of the layout.  There would also need to be a gap in the rails at the point were the helix and main line DCC power districts meet. 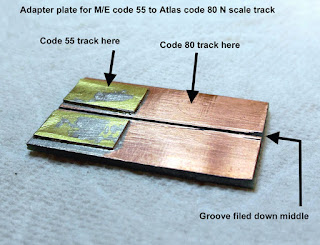 This was the first time I had connected Atlas code 80 track to Micro Engineering code 55 track.  I started by making a plate from PC board material as I had done for track gaps in the staging yard, but this time I added a pair of .020 thick brass strips on one end. 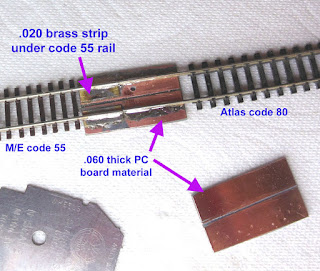 The brass strips brought the code 55 rail up to the height of the code 80 rail.  Then it was just a matter of aligning and soldering in place on the plate.

It is not pretty but it works.  These will be out of view behind the sky board near the helix. 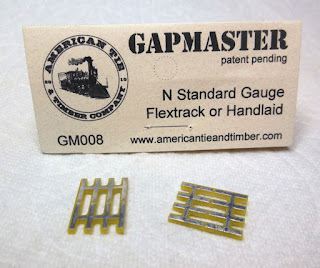 The isolation gaps between DCC power districts on both lines will be in the visible areas of the layout on the code 55 track.   For that I am using a product called Gapmaster from the American Tie and Timber Company.  These are 4 tie sections made from PC board material with a gap in the middle of each tie. 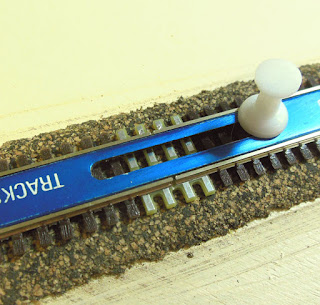 In the case of the WP line shown in this photo, I had two sections of M/E code 55 track where I used the Gapmaster instead of rail joiners. Then just a couple of passes with my razor saw to remove the PC board plating and complete the gap.

On the SP line I removed 4 ties and replaced them with the Gapmaster, then sawed through the rails. 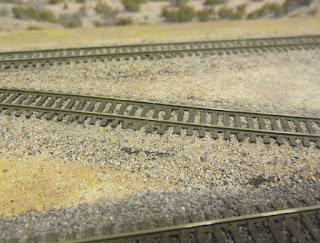 I had already used the Gapmaster with very good results on the double crossovers at Wesso.

This photo shows one of those after the track was painted and ballast was applied.  After the ties are painted they blend in with the rest of the ties.

Posted by nscalestation at 9:51 PM