Striping for the Interstate highway 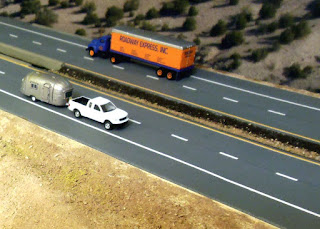 Many of our model roads end up being narrow lanes without any striping.  In this project I have a relatively modern divided 4 lane highway and overhead photos show the types of striping so that is what I am trying to re-produce. 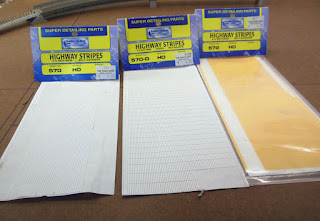 I have been using an HO scale product from Builders in Scale with good results on my Japanese prototype modules so I decided to use them on this project as well. 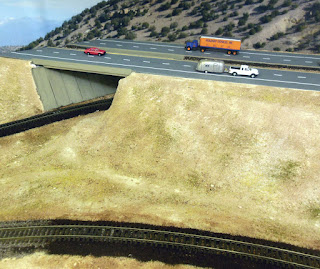 Here is a view of the highway overpass as it is now.  Besides painting the highway section and applying the stripes, I have painted and weathered the retaining wall.  Still need to add some guard rails.

I have also started to add ballast to the tracks in this area starting with the black cinder layer.  In the photo I had just applied the glue solution and it is still wet.

Posted by nscalestation at 8:53 AM 2 comments:

As mentioned in the very first post on this blog, I had first gotten the idea for this layout while driving along Interstate highway 80 parallel to the rail lines.  In fact 80 closely follows the path of Southern Pacific line much of the way across Nevada and crosses over the tracks a few times along the way so I plan to represent the highway at some of those locations.

The first such area to be modeled will be at the west end of the layout where the Southern Pacific and Western Pacific lines diverge just west of the junction at Wesso.  This will a convenient way to have the tracks exit the layout. 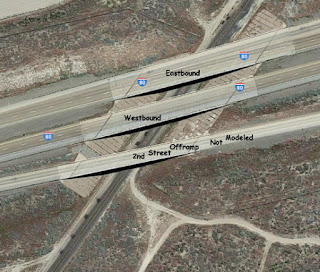 Here is an overhead view from Bing maps of the area I am speaking of.  The orientation is about the same as it would be on the layout.  That is the SP tracks that are going under the freeway.  To simplify the scene I am going to leave out the 2nd street off ramp overpass.

The dirt roads are no doubt used by the railroad for access of MOW trucks.

I started with laminating 2 layers of 1/4 inch hard board together, one layer for the roads with a gap in the middle and the other to hold them together. Plastic strip was added along the edges where the bridge will be. 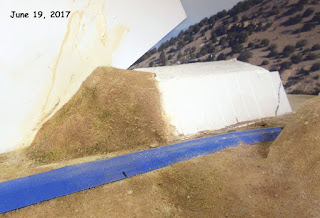 Then I built up the hillside / embankments that support the the highway assembly along the front edge.

As seen in this photo I have started to add base scenery to the area.  The .010 sheet of plastic protects the back drop. 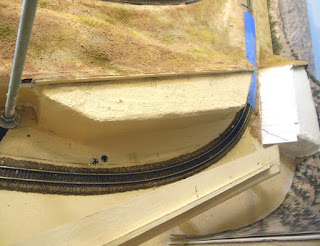 A wood support was installed to support the highway on the rear side.  With built up edges on both supports the highway assembly will snugly fit into place but can be removed to access the track. 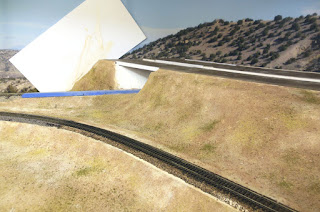 Here is an over all view of the area as it is now.  Still lots to do on the highway assembly, retaining walls, etc.

The base scenery on the hillside is still a bit damp but as it dries will blend in nicely with the existing scenery.  It's drying fast as it is really hot today.

Posted by nscalestation at 4:46 PM No comments:

With about 10 feet of the layout having most of it's scenery finished I thought it would be nice to get some good photos and pick one to replace the prototype photo I have been using for about 3-1/2 years now.  Here is the one I choose.

The fascia is not finished yet in this location so I put in a Photoshop fascia and used the space for titles.  As I finish more scenes on the layout I plan to add a gallery of some sort to the blog, fun stuff !
Posted by nscalestation at 3:10 PM 3 comments: