It had always been my intention to include a scene of grazing cattle in the foreground of the Wesso section.   The recent driving trip through areas of the country where herds of cattle are a common sight seems to have motivated me to get started.  One of the things I needed for this project was barbed wire fencing to keep the cattle off the tracks. 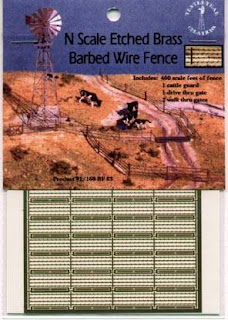 Turns out that that there has not been much done in N Scale for ranch type barbed wire fencing.  One product that I did know about was this one by Yesteryear Creations.   They only had 4 N Scale brass kits and I had built all the others - Windmill, Fire lookout tower, and Sawdust burner and found them to be really nice kits.   None of these seem to be in production any more so I have been picking the fence kits up every now and then on ebay.

I recently found out that N Scale Architect also offers a similar type of product and I plan to try that one out as well. 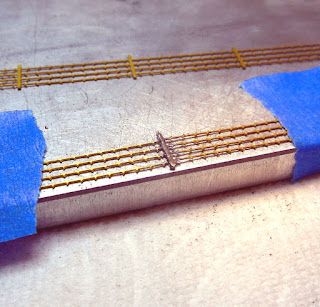 I had a rather large area to do so I made the sections up into several assemblies.  As these fence sections are made of brass, I can solder several sections together.  I line them up and tape them to a straight edge to keep them aligned. 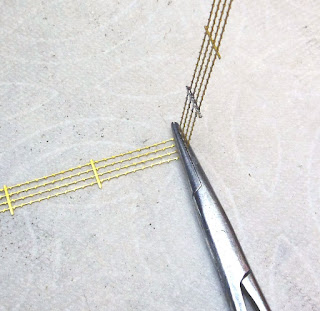 To bend for the corners I hold the corner post with a pair of locking tweezers then bend the wires around the tweezers. 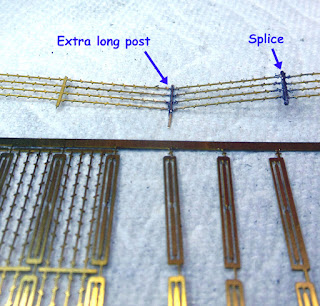 These sets come with extra posts.  I solder these extra posts to a few of the regular posts so that they will be long enough to stick into the scenery base making the fence installation stronger.

I avoid adding these to the posts where two sections are spliced together so those solder joints don't come loose. 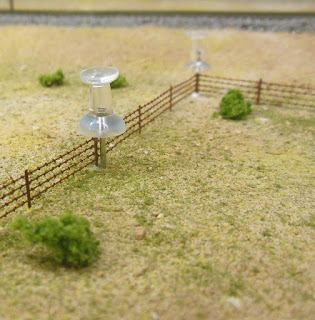 I paint the assemblies with a rust color.  The wire would rust and the poles could be wood or if they were steel poles they would also rust.

Holes are poked in the scenery with a push pin corresponding with the locations of the longer posts.  A drop of white glue was placed into each hole and then the fence section is set in place.   Push pins are used again to hold the fence in place while the glue dries. 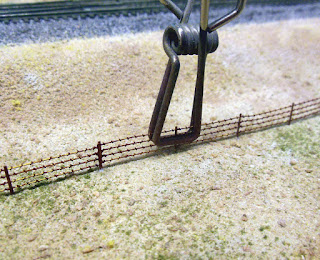 After the glue had dried holding each of the assemblies in place, I then apply a small amount of ACC (super glue) to the end post of each assembly and clamp them until they dry.

Any places that were missed when painting get touched up now. 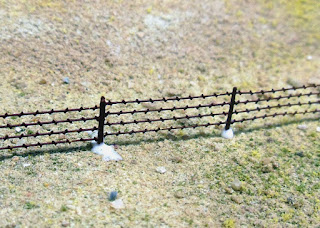 As only a few of the post were extended and secured into the scenery there may end up being a few wobbly places. On those I apply a drop of white glue to the bottom of the post and if needed use a push pin again to hold it down until it dries. 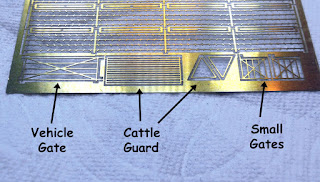 These sets come with 10 fence sections, 3 gates and a cattle guard.  On this project I only used one of the large vehicle gates but may use the others in the future. 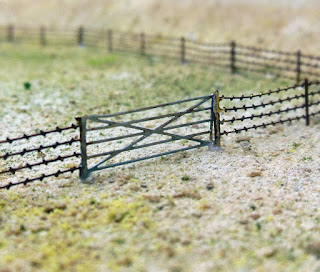 The gate was painted with Floquil old silver and then dry brushed with rust color.

Ready for the herd !