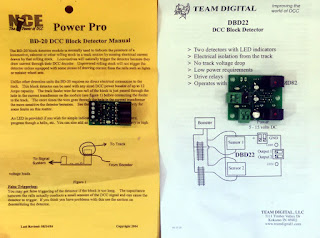 Recently I got around to trying out some block detectors that I have had for some time.  One is a single channel model from NCE and the other a dual channel model from Team Digital.  Both use the principle of sensing the current passing through one track feeder wire. 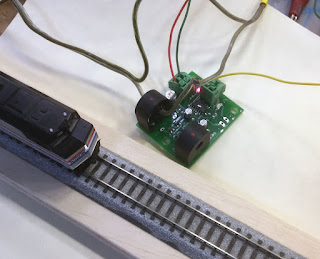 I bench tested both types and they seemed to work very well.  The loco does not need to be running nor do the lights need to be on to get a detection.  Just the decoder being in contact with the track is enough.   The NCE version required a double loop of feed wire through the coil as per the instructions. 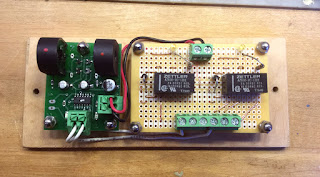 The outputs of the detection boards can drive small, low current 12 volt relays.  I made a small relay board and mounted both boards on a scrap of 1/4 inch plywood to create a dual channel unit with dry contacts as outputs.


These are great little units for track occupancy on a DCC layout.   I also tried them out with DC but they seem to be for DCC only.   I do have something in mind for these and that project will be the subject of the next post.
Posted by nscalestation at 9:32 PM 2 comments: 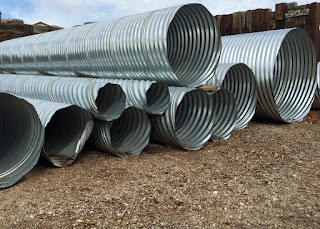 In the previous post I had shown how I had used some steel drain pipes in a scene.  These are commonly used under railroad tracks and roads and come in a range of sizes.  The ones in my scene scale to about 18 inch diameter.  This post is about how I made them. 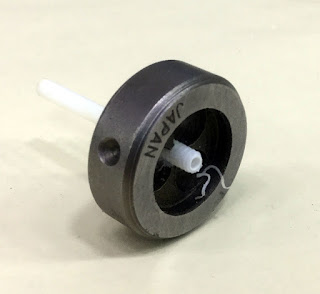 Starting out with 1/8 inch diameter Evergreen styrene tube, I use a 6-32 die to turn threads on the outside of the tube.  Because the die cuts through the plastic easily I was able to turn the die by hand without the die handle. 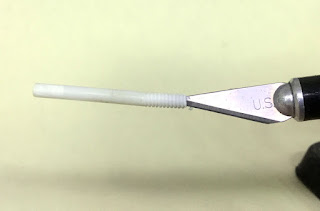 To make the ends appear thinner I turn the pointed end of a # 11 hobby knife blade around the inside a few times. 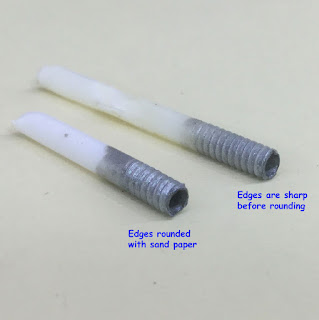 I used Model Master acrylic aluminum to paint these.   After painting I noticed that the threads seem too sharp so I sanded them just a bit to make them rounder and then added another coat of paint.

The unpainted part is just a handle and will be cut off  before placing them into the scene. 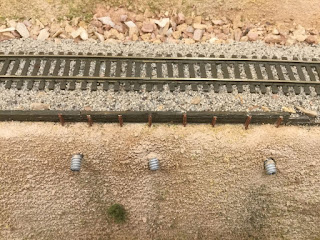 With different sizes of styrene tube and different dies, various sizes of these steel culvert pipes can be made using this technique for use in models scenes.

Posted by nscalestation at 8:14 AM No comments:

Turning a mistake into something interesting 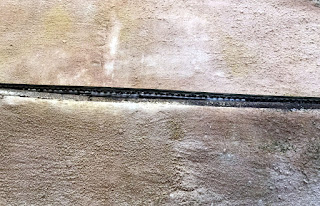 With the recent new addition to the layout I ended up with a spot on the upper line where the existing section met the new section that had a kink in the vertical alignment.  I was able to lift and shim the track to get a satisfactory alignment.


Of course this left a funny looking spot and my first thought was to try to build up the scenery around the track to hide the fact that the track was not firmly on the cork road bed.  Then I got an idea to create something more interesting.  This could have been an area were moisture had been seeping out of the hillside above and the erosion had created a minor washout and sink in the track.  I wanted to model an area where the track crews had improved the drainage, shored up the right of way, and straightened out the track.

I made this wood retaining wall from .060 x .060 square styrene rod.  The texture was made by dragging a razor saw lengthwise.

The finished retaining wall was glued into place with white glue and held with pins while the glue dried. 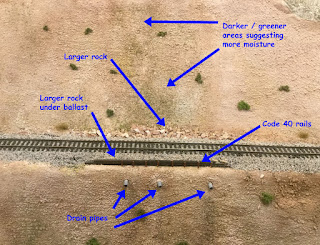 Next I added some short sections of code 40 rail as vertical supports for the retaining wall.  Then the low areas were built up with rock material and the track was ballasted.  Drain pipes were added below to show how water is being drained from the area prone to washouts. 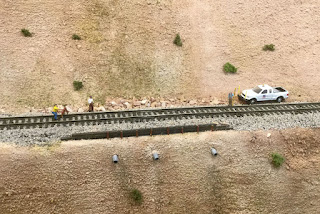 Here a survey crew is checking on how the track alignment was holding up several months after the washout repairs were made.  So far things are things seem to be working out.
Posted by nscalestation at 11:37 AM 2 comments:

Main line has reopened once again

Since last October when I started the Palisade Canyon extension to the layout there have been two dead end lines with no way to actually run a train all the way through.  That all changed a few days ago when things got completed enough to put in a new turn around loop. 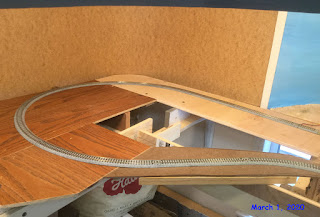 This photo shows the newest temporary turn around loop.  This sub road bed was constructed from scraps of plywood and supported on the permanent bench work for what will be the next extension. 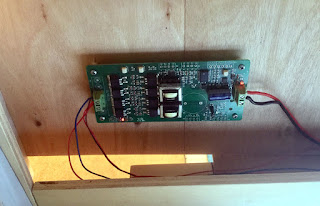 The PSX-AR module that had been under the old turn around loop was re-mounted under this new one.  The DCC bus was extended to it and two feeder pairs from the new loop connected to the output.

This view shows almost all of the new extension of the layout.  It's about 6 linear feet going around the corner. 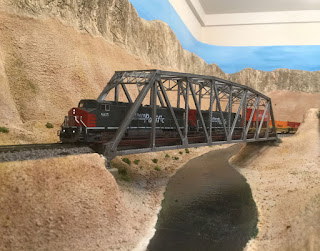 After almost 5 months of construction and not being able to get to any train show layouts I had really missed being able to run my trains properly.  Now I am running everything through the new section to test the track work and so far it's all running well.

Posted by nscalestation at 11:10 AM 2 comments: 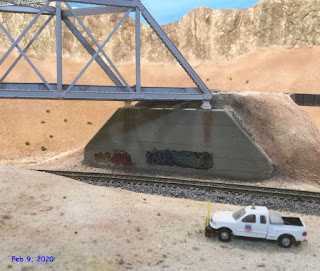 The bridge got a set of 3D printed bridge shoes from Shapeways which established what the exact height of the abutments needed to be.  The abutments were made from wood and painted with Model Master concrete and weathered with acrylic wash and then powders.  This one also got some graffiti on it.

The track for this bridge was made up of section of Micro Engineering standard code 55 track with some of the ties removed and replaced with the bridge ties that came with the Central Valley bridge kit. 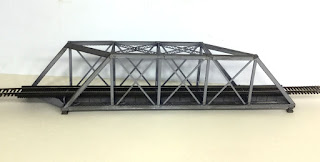 My Floquil old silver had run out but Model Masters aluminum was a perfect match for the second paint coat.   The bridge then got some weathering and the track assembly was attached to the bridge with E6000 adhesive.

The bridge was set it place with E6000 adhesive on the bottoms of the bridge shoes to secure it.  The tracks were connected to the adjoining sections and secured to the cork road bed with while glue.  I will wait on the ballasting the track until I've done a good bit of testing with a variety of trains.

Posted by nscalestation at 2:06 PM 3 comments: