Not all of the flat cars carrying military equipment are owned by the Department of Defense (DODX).  Trailer Train has a number of 89 ft flat cars that are classified as type F226 and lettered TTDX that are used in this type of service.  I wanted to model a couple of these types to add to my train.

Years ago there was a hobby shop near San Francisco Airport called Trackside Trains.   Even though it was over 20 miles away I visited frequently.  At that time it seemed like undecorated Micro-Trains flat cars were a great deal compared to the decorated ones so every time I visited the shop if he had one I would buy it.  So I ended up with a good number of these and had only finished a few.  I am now using a couple of these for this project. 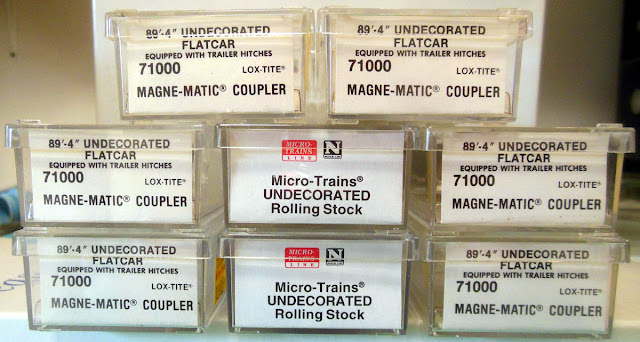 The molded on detail was removed from the deck and .040 x .040 Evergreen styrene strip was glued along both sides along the edge. 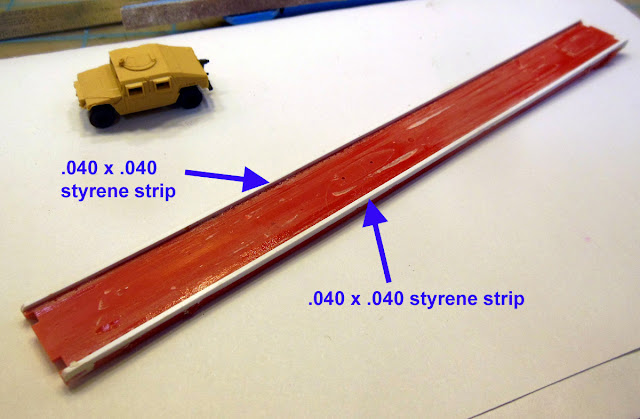 Two flat cars bodies were modified this way then airbrushed with Accuflex Trailer Train yellow which is glossy enough that I could add decals without a gloss coat first.   All of the decals came from Microscale set 60-578 except for the "TTDX" which came from the Gothic letter.   It is surprising how may decals can be used on a flat car and this took quite a bit of time but is one of my favorite parts of the hobby.  Afterwards the car bodies were sealed with Dulcoat lacquer.

In the top photo of 253698 there does not appear to be wood decks but I have seen photos of others that did and I liked the look of it so I added wood decks by adding 3 strips of .156 x .040 styrene strip that had been raked with a razor saw and then painted roof brown.  The spaces be along the edges and between the deck boards represent the chaining channels.

So next I need to finish some more HUMVEES, trucks, or other wheeled vehicles to populate these new cars.

Posted by nscalestation at 10:19 AM