The rebuilding of Sparks Yard

In October of 2014 construction on this layout started this layout with a double staging yard.  The first part of the staging yard was for the Southern Pacific line extending west from Weso so it is referred to as Sparks.  For those who do not know the area, Sparks is just east of Reno and SP had a large yard there which UP still uses today.

A number if issues with this yard have come up after this long and I have also learned a few things with experience of running the layout that makes me want to rebuild of the Sparks yard.  I will list those issues and planed solutions below. 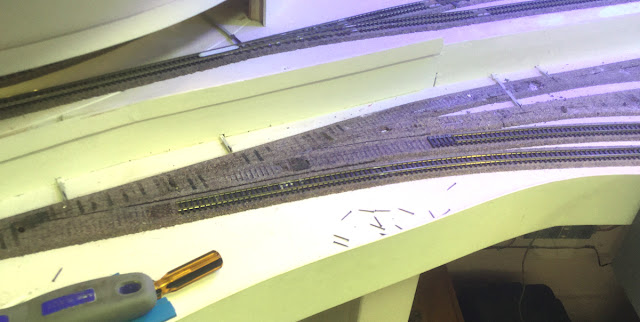 And so it has begun as seen in the photo above.   This is the entry into the yard from the helix.  Five original turnouts have been removed and the sidings will be cut back to make way for the new track and turnouts.  Once this end of the yard is done then work will begin on the other end.  This will not be a quick project and I expect it may take a couple months as least.   The layout can still be operated using the other staging yard.  Updates will be coming in future posts.

Posted by nscalestation at 5:30 PM