Almost 30 years ago I attended an informal clinic during an Ntrak club meeting on modifying Peco turnouts by adding a .010 shim to the inside of each guard rail to prevent the inside wheel flanges from hitting the frog.   This method became something of a standard for the members in the group and it is something I have always done prior to installing Peco turnouts on my home layouts and Ntrak modules.   I don't add this shim to my code 55 turnouts on my Asia prototype modules as some of the equipment run on that layout has thicker flanges and the shim would make the guard rail too tight. 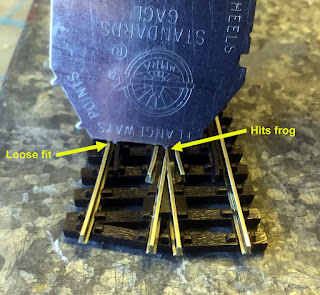 This photo illustrates what happens when the space between the outer rail and guard rail is too large.  When allowed to slide inward the inner tab of the gauge can hit the frog. 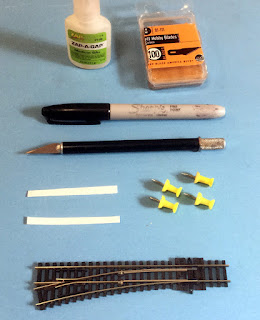 These are the materials I use for this project. 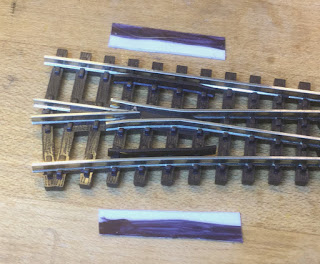 The strips are cut to a length just a bit longer than the guard rails and one side is blackened with the sharpie pen. 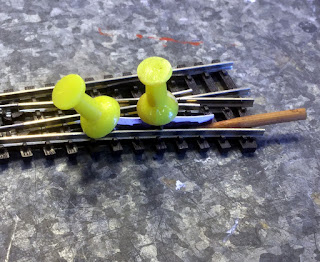 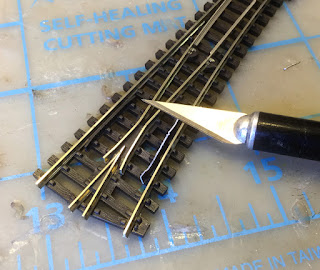 Next the excess strip is carefully cut away with a hobby knife making it flush with the guard rail.  The rails are used as a guide.  Any excess of the strip that extends beyond the guard rail is also removed.  This is where a nice new blade in the hobby knife pays off. 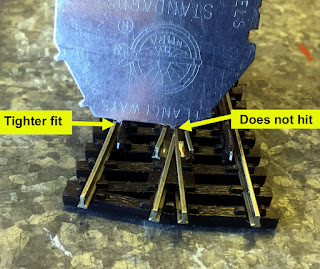 The shim should match the height of the guard rail and the edge is colored with the black sharpie pen.  As seen in this photo the gauge passes through without the inner tab hitting the frog.

Posted by nscalestation at 9:10 PM