A new brand of turnout motor 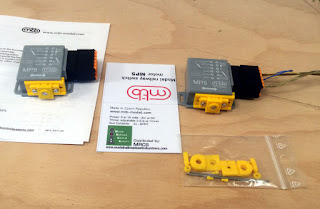 Well, new to me anyway.  A friend recently introduced me to a brand of turnout motor that I had not hear about before.  These MP5's are slow motion motors that run on AC or DC, and 2 sets of double pole contacts. 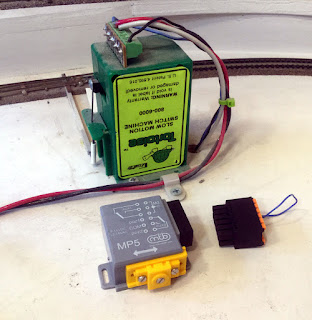 This photo shows the comparison between one of the existing Tortoise motors on my layout and of of these new MP5 turnout motors.

Another feature I like about these is that the wires are connected to a removable plug which would make things easier when working under a layout. 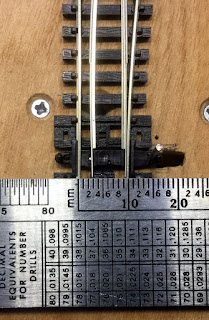 I have been testing these motors out with some new Peco turnouts.  Using the stock rod that comes with the turnout motor, the movement is strong enough that there was no need to remove the over center spring in the Peco turnout.  On other types of turnouts I would use a more flexible wire linkage.

The turnout points need to move about 3mm.  The amount of movement on the motor the way it came was too much so I needed to change it from the stock 6mm to 3mm. 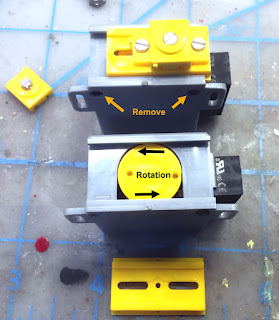 After removing the two screws on the bottom, the bottom can be hinged open and the slider part removed.

The cam inside rotates a half turn with voltage in one polarity and then another half turn in same direction when voltage is reversed.  If the cam cannot continue it's rotation because it has reached the stop on the turnout, it cannot be reversed by reversing the polarity. 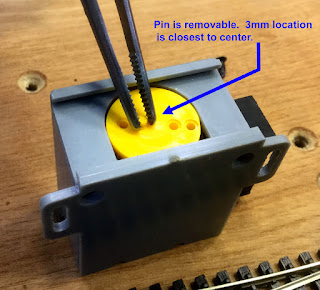 A pin on the cam fits into a slot one the slider and the rotation caused the slider to move.  The holes on the cam are at 3, 6, 9, and 12 mm from the center of the cam which correspond to how much the slider will move.  The pin is installed at the 6 but can be pulled out and moved to the 3 for N Scale turnouts.


These seem like great little turnout motors and they cost about the same as a Tortise motor.  The small size makes them great for modules or layouts with shallow frame bench work.  They are made in the Czech Republic by MTB Models and are sold in the US by Model Railroad Control Systems.

Posted by nscalestation at 10:22 AM