Lately I have been finding more ways to use the Azatrax Infrared (IR) train detection circuits and sensors. Recently I received a pair of single channel detector circuits that operate a bit differently than the 8 channel circuit that I featured in the posts Experimenting with Infrared detection circuits and Automation of the yard's reverse loops. 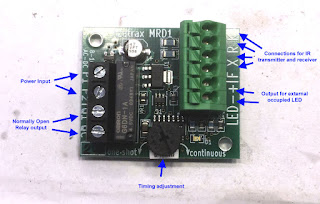 This is the MRD1-V.  The V in the model number is for variable delay.  When the timing adjustment is turned all the way counter clockwise,  the relay will turn on for 1 second then turn off even if the beam is still blocked.  This is called one-shot operation. 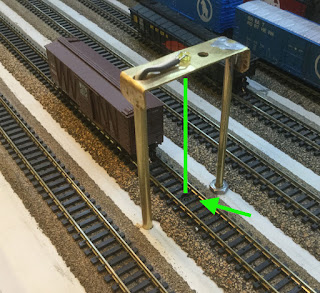 The one shot operation is like pressing a momentary button on the control panel.  By connecting the relay in parallel with a panel button this could allow for some automation of the staging yard.  I built a small brass structure to mount an IR transmitter on top looking down with the receiver in the track.  The actual IR beam is invisible but the green line indicates where it would be. 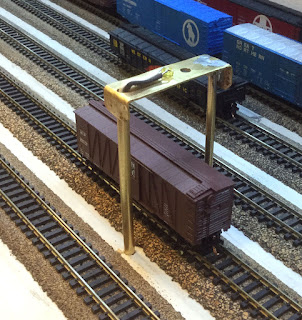 The 1-1/2 inch spacing of my yard tracks is enough for the the trains to clear the 1/8 inch poles of the structure.

So with the relay output connected in parallel with one of the push buttons on the control panel this concept was successfully tested by pushing various cars through the structure. 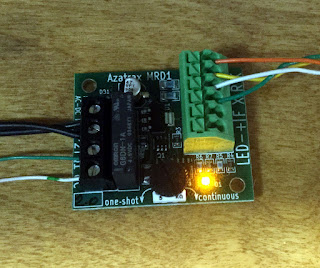 Here is the MRD1-V temporarily sitting under the staging yard with the beam blocked indicating occupancy.  There is an occupancy LED on the board plus connections to have a panel mounted occupancy LED if desired. 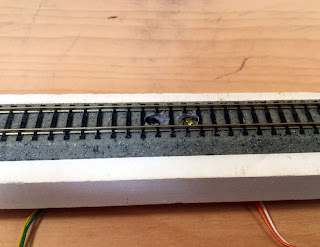 I also tried out the reflective mode with the IR transmitter and receiver mounted through an old section of Kato track.   This also worked quite well with several different cars and locomotives but passing a hand over the sensors also could trigger the circuit so I will be careful where I use this setup on the layout.
Posted by nscalestation at 6:52 AM