When I returned to N Scale in the early 1990's Aztec Manufacturing was local to me and the Trackstar track cleaning car was the first choice among the local guys.  So of course I bought one which became several and still use them today.   Because of my early introduction to the Aztec cars, I had never had or built a Masonite slider track cleaning car so I thought it would be something fun to try.

For my project I choose this Micro-Trains covered gondola Western Pacific 6053 from my collection.

This model has separate plastic under frame detail which was removed.   Some of the detail molded on the bottom of the steel under frame was filed smooth. 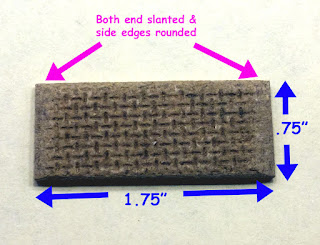 A scrap of Masonite hard board was cut to a 1.75 x .75 inch size.  The ends were sanded at an angle and the sides rounded as shown in this photo to prevent an snagging. 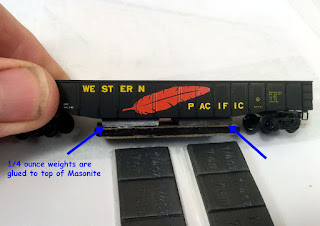 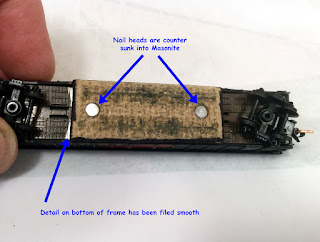 A pair of holes were drilled through the Masonite and weights and small nails glued into them with the heads counter sunk into the fuzzy side of the Masonite.

A matching pair of holes were drilled through the steel under frame and car body floor. 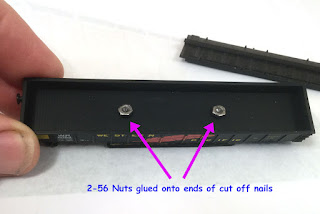 The nails were cut so that they only stuck up about 1/4" from the floor when the Masonite wiper was pushed all the way up.  2-56 nuts were glued onto the ends of the nails.  The right thickness nails could have been threaded. 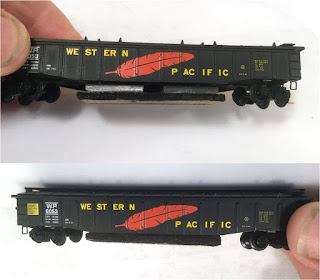 This pair of photos show the Masonite pad in it's fully extended and retracted positions.  It can move up and down freely about 3/16 of an inch to allow it to move over any unevenness in the track.

With the pad, weights, nails, and nuts there is about 2 ounces of downward pressure of the pad on the rails. 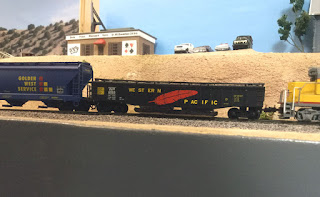 I use this car with the cover on but suspect an open load could also be used as long as it was hallowed out in the right places to allow for free up and down movement of the nails.

Posted by nscalestation at 8:33 AM