Automation of the yards reverse loops

I have always been interested in making some things happen automatically on a layout.  This layout is giving me a chance to try out some automation ideas and this is the first one of these ideas that I have actually gotten to work on.

With this layout design it was not really possible to run a train totally hands free.  Which ever yard a train came into the turnouts that create the reverse loop would have to we moved to the correct position and then moved again for the train to leave.    The PSX-AR boards already take care of the track polarity but I wanted to automate the operation of the points on the reverse loops turnouts.

This diagram shows how I am doing this on each of the two yards using a combination of the detection sensors shown in the last post and IR sensors. 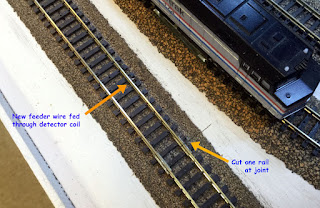 For the lower yard I cut a gap in one of the rails on the return track and then added an extra feeder wire that was fed through one of the detector coils before being connected to the track bus. 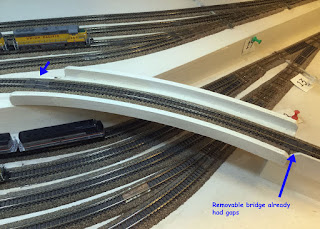 For the upper yard I am using the removable bridge on the return track as the point to trigger the reverse loop turnout to move to the diverging position.  It is already isolated with it's own feeder wires and one of those was fed through the other detector coil. 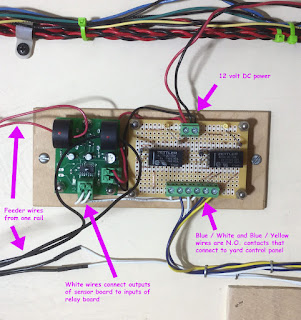 One feeder wire from each of track sections described above is fed through one of the coils on the detector board.

The detector assembly is mounted under the yard about where the the UP locomotive is in the previous photo.  This location is close to the feeder wires used for detection. 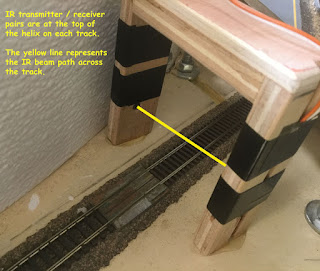 To trigger the reverse loop turnouts to move to the aligned position for trains entering the yards each line as an IR transmitter / receiver pair mounted on a wood frame at the top of the helix.  I was considering using the occupancy output from the helix PSX boards but that would cause the turnouts to change while part of a train is still crossing them. 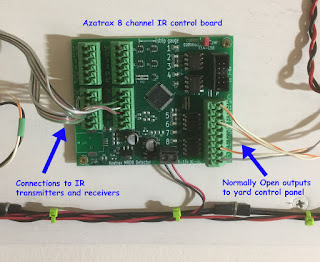 This is the Azatrax IR control board that is located in the wall cabinet under the yard.

The normally open outputs from this board and the dual detector assembly are connected in parallel with push buttons on the control panel to set the turnouts in motion. 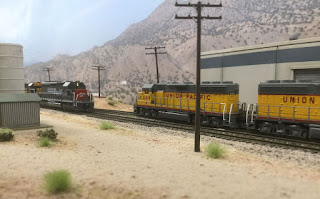 I have been running this circuit for many hours already while working on other project at the work bench and it works great.  Totally hands free with one train.  With more than one they may need to meet at the siding in Battle Mountain and that is done manually.

Posted by nscalestation at 8:04 AM