Coal shipments begin on the layout

In my original plan for the layout I was going to include the Sierra Pacific coal burning power plant at Valmy, Nevada which would have been where Battle Mountain is on the layout.  The reasons for this change were explained in the July 2017 post Decisions about industries.

I still thought it would be nice to have some coal cars running as through traffic on the layout and started to think about what industries beyond my modeled area to the west would use coal.  The coal would have come from the Powder River Basin east of my modeled area. 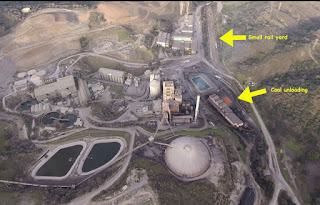 I know of no coal fired power plants west of the Sierra Nevada and during my modeled era there was no coal being exported from any California ports.  However are some coal fired cement kilns in California and one near my home is shown in this photo. 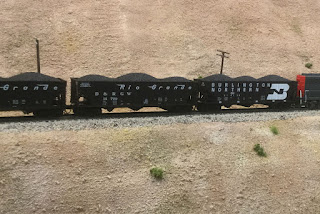 Up to now I have not had any appropriate coal hoppers to use in this service but recently I was able to acquire 8 Micro-Trains, 3 bay, 100 ton hoppers in both Burlington Northern and Rio Grande.

In photos and videos I have seen hoppers identical to these being pulled up to the local cement plant.  The build dates on these models are in the late 1960's so they fit great into my 2 earlier (76-82 & 83-88) eras.  In more recent years I see mostly 4 bay hoppers on the line to the cement plant but do still see a few of these 3 bay models in the mix.   Maybe later I can add a few 4 bay hoppers for my later (89-96) era. 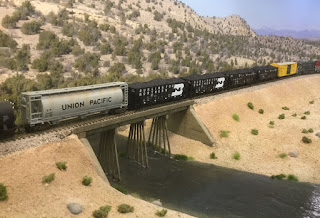 With smaller customers like cement plants it could make sense that a shipment of a few cars would be in a manifest train between Ogden, UT and Roseville or Oakland.  Here is a west bound SP train near Golanda with a few coal loads.

Posted by nscalestation at 8:32 AM

Email ThisBlogThis!Share to TwitterShare to FacebookShare to Pinterest
Labels: operations