A Hi-Rail truck from an Atlas Ford F150 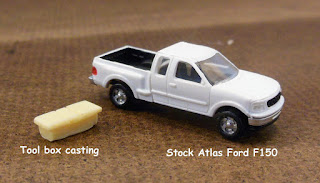 The starting point for this project was a white Atlas Ford F150 pickup.  Several years ago I had purchased several of these to decal as U-Haul rental trucks after making the decals for them.  I had also made cast resin truck mounted tool boxes to fit these models. 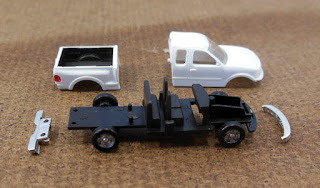 The truck's major components come apart easily enough as shown in this photo.  The front bumper removed leaves a gap that can be used for a replacement extended bumper. 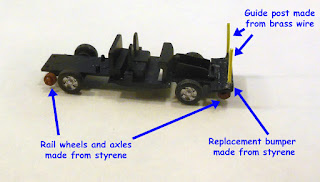 An extended replacement front bumper was made from scrap styrene.  Crude rail wheels with axles were made from scraps of styrene rod and tube.  The front guide posts are .020 brass rod stock. 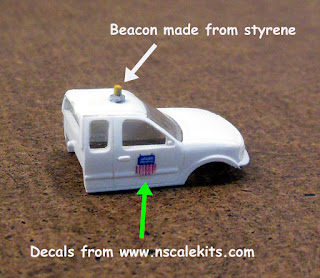 A rotary beacon was modeled using styrene rod and tube scraps.   I was able to get some MoW truck sized decals from Peter at www.nscalekits.com.  They don't have them in their catalog but if you contact them they will make them for you. 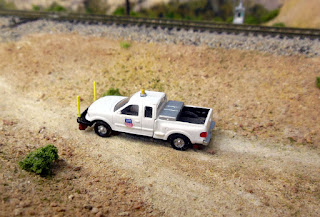 The tool box was painted aluminum color and attached to the bed with E6000 adhesive and the truck re-assembled.   Here it is on one of the service roads on the layout.  I plan to do another one with "wheels down" to display as a high rail on the rails.
Posted by nscalestation at 8:35 PM