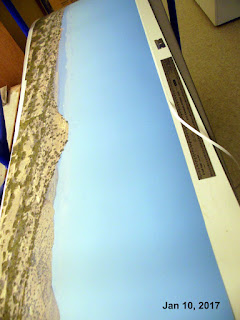 Within the past few days, all 24 feet of Backdrops Junction photo backdrop has been installed.  These were four 6 foot sections.

I decided to trim the top border from my backdrops.  The borders were not consistent in width and I felt it was just a cleaner look to have the blue edge of the backdrop sky bordering the slightly off white of the FRP.

To do the trimming I used a spare FRP section as a work surface and trimmed the border with a razor blade and straight edge. 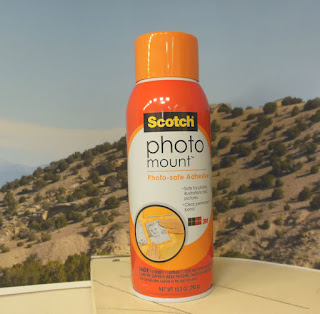 As I mentioned in the last post, I had tested several adhesives with scarps cut from the borders of my backdrops.  Of the 4 adhesives I tested the best result came from the Scotch photo mount spray adhesive.

It does not slide around to allow adjustment but the material can be pulled up within a few minutes without damage if adjustment is needed. 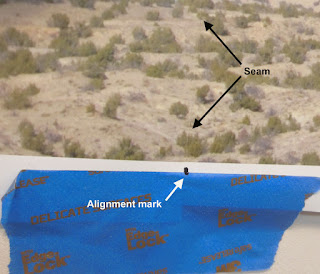 This was my technique for the mounting and aligning seams.  I used small pieces of double stick tape to temporarily hold the backdrop while positioning it.

There is extra material on each end for overlap. Line up the sections so the photos match, then make a mark above the top and below the top. 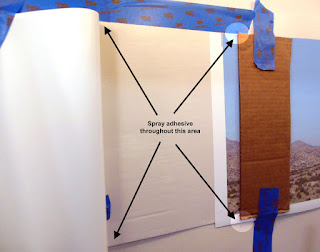 Painters tape was placed along the top edge to both mark the alignment and to mask for any over spray of adhesive.

I used a piece of cardboard aligned with the marks ( highlighted ) to mask the area of the backdrop that I did not want the spray to get on. 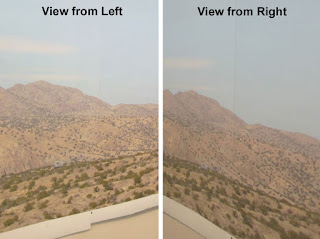 A seam is slightly less noticeable from the direction of the top layer.  This photo shows the same seam, the left layer on top of the right layer.

A little planing on where the seams are to be and which angle they are most likely to be viewed from can give a better overall result. 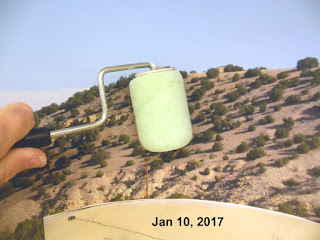 After one end of the backdrop was secured, the other end was rolled back and double stick tape removed.  Then working about 18 inches at a time the adhesive was applied and backdrop rolled out aligning with the blue tape on top.  I used a narrow paint roller with a new pad on it to press the backdrop material onto the FRP. 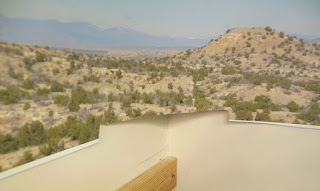 The backdrop had to have a section cut out on the bottom where it rounded the corner so the bench work could fit under it.  This was expected and the FRP already had a notch cut in it. 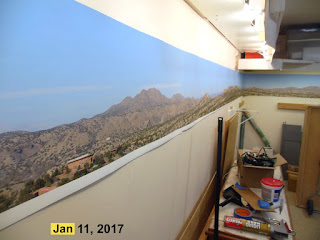 Here is the view from the other end of the room.

Now that this much backdrop is finished, the Wesso and Gloconda sections can be mounted in place, some fascia can be installed, and track and wiring connections made on those sections.


Posted by nscalestation at 9:27 PM

Email ThisBlogThis!Share to TwitterShare to FacebookShare to Pinterest
Labels: back drop