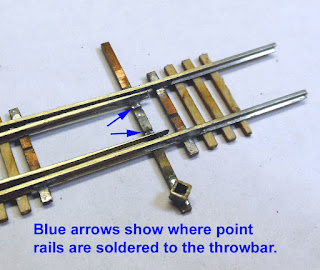 While I've been happy with how smoothly the hand laid code 55 turnouts operate I have noticed that they are a bit delicate where the point rails contact the throw bar and have had several break on an Asia themed module while running the layout at  shows.  Not too hard to fix but I have been looking for ways to improve the durability.


Checking on the internet I learned that other people have had this problem on turnouts with smaller sized rail. It was suggested that the tension on the Tortoise motors be checked and I did that but have not been able to completely solve this issue. 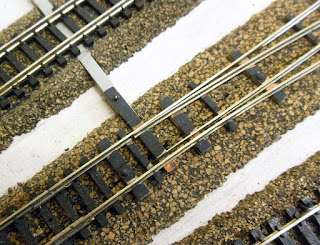 I had worked around this problem In my home layout's staging yards by using HO scale ties to match the height of the ties on the Atlas code 80 flex track I was using.  The extra width of the throw bar seems to provide a stronger bond to the point rail.  With 16 turnouts in use there have not been any broken points so far. 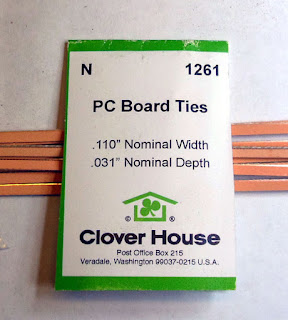 The areas of the layout with scenery and code 55 track were going to need a different solution.

The PC board code 55 ties that come from Fast Tracks are .31" thick.  I purchased these PC ties from Clover House that are the same thickness but are wider.

My idea was start with this material, cut it to the length needed, then file down the areas that would be exposed to the same width as the Fast Tracks ties.  Leaving a section that would be under each point rail the full width.

I made up this crude little fixture from brass stock to help create the shape I wanted with a file.  The length of .110 PC board ties is placed into the slot that runs lengthwise. 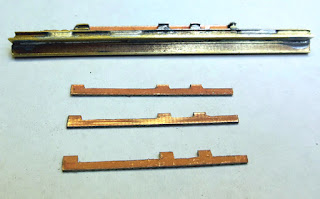 The three shaped sections show in this photo is the results of only a few minutes of working with a file with the tie section in the fixture.  The two wider areas on the right are for contact to the point rails and the one on the left is for a reinforcement for the wire from the Tortoise motor. 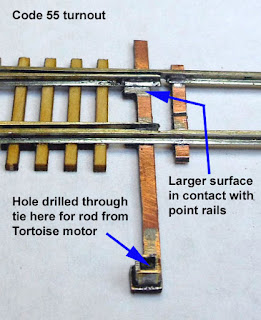 Here is one of these customized tie sections installed in a turnout.  The idea is to have a bigger area of soldered contact with the point rail while maintaining an appearance of something close to the width of the rest of the ties.

Of course the real test is going to be getting a few of these  turnouts installed on the layout.  The double cross over / junction at Wesso will get the first 4 of these turnouts and will receive lots of use.

Posted by nscalestation at 9:35 AM