Once the tracks from the staging yards reach the top of the helix they will enter the western end of the paired track at a point the railroads call Wesso.  From here the SP would go to the southwest toward Sparks and Reno and the WP in a more directly western direction.  The general alignment of both railroads at Wesso is in a Northeast to Southwest direction. 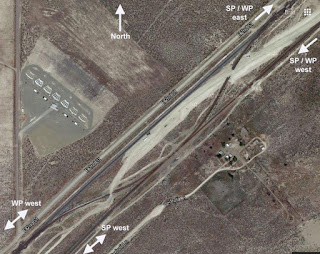 Here is a screen shot from Googlemaps with my notes added to illustrate.  Besides the railroads the most noticeable feature is what appears to be a trap shooting range. I don't know if this was here in my 1970's to 1996 modeling era so mostly I plan to concentrate on the features related to the railroad such as the signals and dirt access roads.

Whenever modeling a prototype scene there are always some compromises to be made.  This drawing helps  illustrate what I will try to explain below.

Because I only have just under 7 ft to model this scene and on one end there is a 90 degree turn I  had to reverse the position of crossovers relative to how they are on the prototype.  On the prototype the two crossovers  meet on the SP side but in my model scene they will meet on the WP side.  This does not effect the operation.

One goal in my modeled scene will be to create the illusion of the two lines moving off in slightly different directions from one another as they enter the helix.  I plan to use a few hills and the Interstate 80 overpass to terminate the view of the SP line before it begins it turn into the helix.  This actually happens on the prototype in Winnemucca about a mile to the west of the scene.  The WP line will be in the open while it makes a gentle turn and go behind some hills or structures on the outskirts of Winnemucca which again is only a mile or so west of the scene.  So using scene compression to an advantage here.  Another way the scene will be compressed is the space between the tracks.  On the prototype the tracks are about 300 feet apart but I plan to model them at about 100 feet apart.

As mentioned in the last post, I've been working on the turnouts that will be used on this section of the layout and plan to start the bench work soon.
Posted by nscalestation at 2:25 PM