When I was checking the yard ladders for power I was using an LED wired in series with a resistor.  It occurred to me that were a track circuit was being switched on or off the indicator light could also be powered from the track. 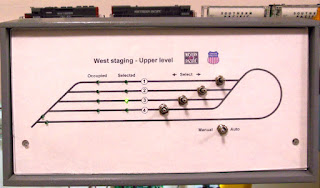 This is the control panel for the upper or WP yard.  The LED for track 3 is lighted indicating that is the track that is energized and the turnouts aligned for.  The indicators for the turnout on the lower left are not yet connected.

The occupied LED's were put on the panel with the plan to do something with occupancy detection later.   Those will most likely not be powered by the DCC signal. 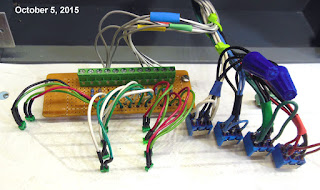 Here is the back side of the control panel showing the connection.  The track selected LED signals are the wires connected to the green terminal strip.  The current limiting resistors on the PC board are 330 ohms. 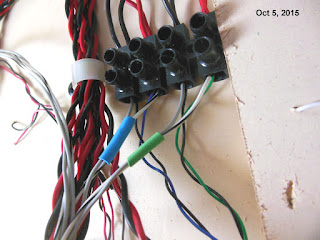 The other end of those wires are simply connected to the terminals for track power.  To keep things straight I color coded the wiring for the tracks on this yard as follows 1 = Red, 2 = Yellow, 3 = Green, and 4 = Blue.   This photo shows the connections for tracks 3 and 4.
Posted by nscalestation at 4:14 PM