In my recent post Powering panel LED's from DCC signal I showed how I used the fact that DCC power was being switched on and off on the staging tracks to activate the track selected LED's on the control panel.  I also have LED's on the control panel to show the position of the turnout that creates the reverse loop.  I did try out connecting to the DCC signal and switching one side through the contacts on the Tortoise switch motor but the LED's did not turn on and off reliably for some reason.  So a DC power source was going to be needed for these and other LED indicators around the layout.  I already had an unregulated 12 volt DC power bus set up to operate some of the electronics around the layout but for LED indicators so I made up a small regulator board for this purpose. 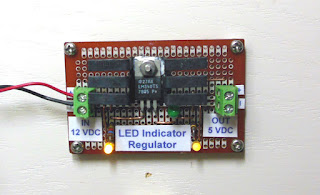 This photo shows the 5 volt DC voltage regulator mounted inside the control center.   This small PC board measures 1.875 x 2.875 inches.  The heat sink may not be needed for light duty applications but I had it in my stash of parts so included it. 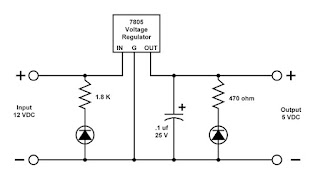 Here is the schematic for the circuit.  The .1 uf capacitor may not be necessary if the circuit is just powering LED's.  I have found in the past these regulators can have some noise on the output that can create problems for logic circuits and by habit always include it in my regulator circuits.

The parts I used were all items from my parts stash.  The vendors and part numbers are shown as an example, these are common parts available from many sources. 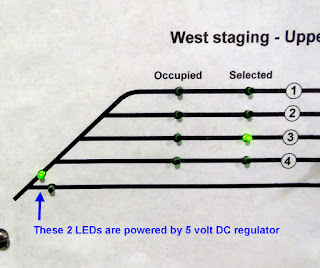 Here is a close up of the control panel for the upper section of the west staging yard showing the LED's for the return loop turnout being activated.

Posted by nscalestation at 10:08 AM