In the spring of 2011 my wife and I purchased a travel trailer.  At our place we have a seperate double car garage toward the rear of the lot with a narrow driveway to access the garage.  We needed to park the trailer in front of the garage which blocked any possible vehicle access to the garage.

Since we were no longer parking the vehicles in the garage, I began to start looking at using part of the garage as a layout room.  This room would also have to serve as my model / DCC & Electronics work space and have space to set up a module or two for working on them. 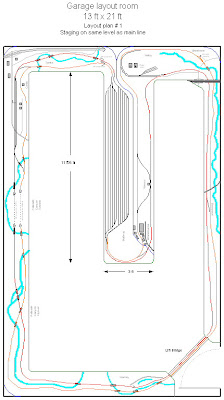 Before I could start building the room, I needed to know what the layout was going to be so I began the process of  actual layout design.

My first design drawn with Microsoft Visio is shown here had an overall size of 21 x 13 ft. The layout went all the way around the room with a peninsula that included the double ended staging yard.  Near the entry door there would be a lift gate.

In this configuration I was able to include most of the scenes that I had made the drawings of.  The open area at the end of the peninsula could be used for working on a module.  The work areas would be under the layout on the left hand side in this drawing.

This would be only the first of several layout plans I would draw but it was good to actually now have an idea where I could build a new layout and to get started with actual layout drawings.
Posted by nscalestation at 10:59 AM