Lessons learned from the old layout

In early December 2013, I dismantled the layout that I had called the California Northwestern.  I had started it almost 12 years before and it was fully completed.   It's always a bit sad to tear down a layout but at the same time I am looking forward to starting the new one.

When I built the California Northwestern my goal was to try as many new ideas (new to me anyway) as possible.  I consider this to have been a successful layout when I recall everything I've learned from it.  While I was dismantling it, I recalled many of the things I had tried, what worked well, and what did not.  I got out the camera and documented some of them.  This is how we learn and build the next layout even better than the last. 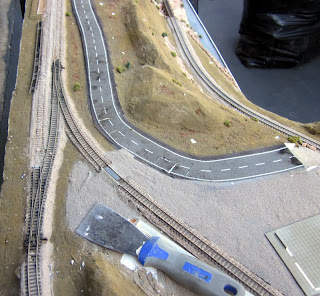 After all the buildings, trees, and other details were removed, the two sections of the layout were taken outside as it would get messy next.

I had used the Busch instant roadway product for my highway.  In this photo it is very noticeable that it had cracked and split where the material had been bent around a curve.  The material had generally degraded by about 8 years after being installed.


The raised areas of the layout were built with Styrofoam sheet to match the Woodland Scenics Styrofoam risers.  While the risers worked out fine, I would not recommend using Styrofoam for scenery base.  Besides being more messy, it also is not very firm as a sub roadbed.  The six turnouts on this layout were built on 1/8 inch acrylic sheet as a unit including the cork road bed, Peco code 55 turnouts, and Tortoise motors.  After being thoroughly tested, these units were then placed into cutouts in the foam and secured with Liquid Nails adhesive.  This meant they were non serviceable but they never gave me any problems in 11 years of service. 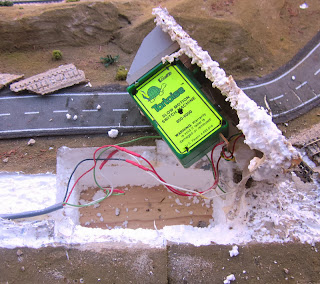 This photo shows one of the turnout units after it was removed from the foam.  I've really become a big fan of the Tortoise switch motors.  I've mounted them vertically, horizontally, and upside down and they've always worked.The ones on this layout had been re-used from another layout before and will be used again on the new layout along with some additional new ones.  They are about 20 years old at this point. 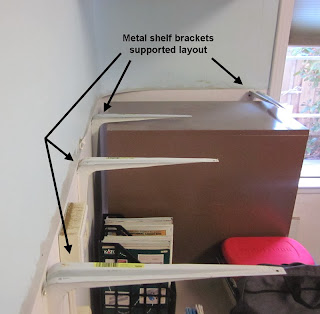 Here the metal shelf brackets are shown after the layout shelf had been removed.   I had set this layout just high enough at fit the file cabinet under one end. It was not until I was removing the layout that I realized that I had forgotten to put the screws into the layout shelf on last two brackets by the file cabinet.  I had never noticed any weakness there so using these type of brackets every 16 inches really works well to support a layout like this and all these will be re-used on the new layout. 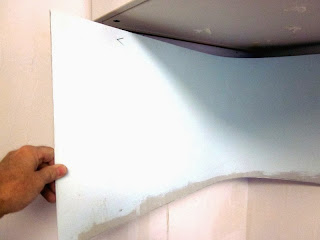 Another thing I had tried on the old layout was the use of plastic paneling for the sky board and to cove the corners.  This is available in 4 x 8 ft sheets and has a textured surface.  I used it backwards as the back side is smooth.  It was attached with a few finishing nails and then painted.  This seemed to work really well.  I want to use some sort of photo backdrop on the new layout but this will give that a smooth firm surface. 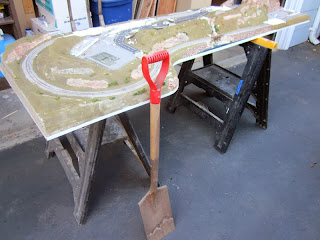 With everything salvaged from the layout that could be re-used or sold, it was time to scrape off all the Styrofoam which was bagged for trash collection. The Peco code 55 track and turnout were also not re-usable. The plywood bases were then cleaned up and will be re-used.
Posted by nscalestation at 12:27 PM