When I re-entered active N scale modeling in about 1990 I had decided to keep as narrow a focus as possible in terms of era and railroad.  My initial interest was on the Southern Pacific between 1958 and 1965.  This era fit the theme of my Ntrak modules and first two layouts and I was able to build a good representative fleet of locomotives for that era.

After I got interested in modeling the Palisade Canyon, it opened up the possibility of acquiring many more locomotive models which has been a lot of fun.  Initially I started with expanding my SP roster to the years beyond 1965. 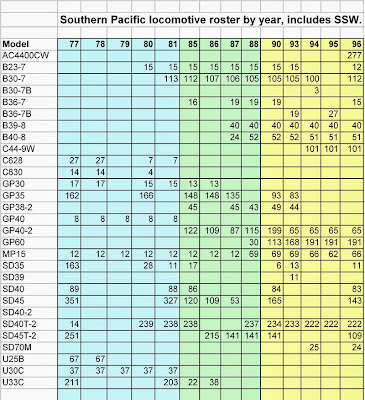 From various sources I compiled a list on an Excel spreadsheet of locomotives sorted by year between 1977 and 1996 and used this as a guide.  This spreadsheet is shown here.

Some of these are not available in N scale but most are.  So I began to purchase locomotives and assign them to one of the three eras that will be represented on this layout. Most of these were found at train shows and on ebay.

So I got a start on expanding my SP roster but also needed to build up a Western Pacific roster of locomotives for my 1976 to 1982 era and I'll talk about that in a future post.
Posted by nscalestation at 10:20 PM