2008 to present - Buying and building bridges

One of the things that I really like about the Palisade Canyon are the many thru truss bridges that I could see on the Google satellite images and also in the images I found on the internet.  As I developed my plans to build this layout I started to acquire models of some of those bridges.  If possible I wanted to try to match the prototype bridges as close as I could.

In 2008 BLMA came out with a brass 4 section thru truss bridge model.  I felt this would be a good match for the WP bridge that is just west of the two palisade bridges so I picked up one.  This is a beautiful bridge with great detail and set my expectations high for any additional bridges.  At about $200.00 for one bridge, that was going to get expensive even if they could be found.  I wished there was a plastic kit bridge that had the same great detail and that could possibly be modified to match particular bridges on this layout.

Then sometime around 2009 I got my wish when Central Valley Model Works introduced an N scale version of their popular HO scale 150 ft thru truss bridge model.  These kits were less than $30.00 and included see thru cross lacing in the girders just like the HO version.  I picked a model 1810 bridge kit and built it to match the WP bridge at Palisade near the tunnels.  To match the prototype, I shortened the bridge by 1 section and modified the bracing at the top of the portals.  This bridge would be the first actual part of the layout to be completed.

Central Valley  then released their model 1815 bridge with portals that were a good match for the SP bridge at Palisade.  This one was also shortened to 3 sections to match the prototype.  Great, now I had good models of all 3 bridges west of the Palisade tunnels. 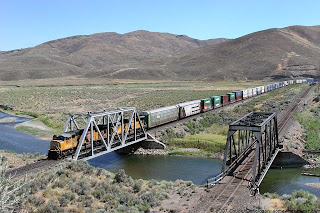 The three bridges referred to in this post can all be seen in this photo.  The 2 silver colored ones are on the former WP line and the black one is on the former SP line.  This scene is one of the most photographed in the Palisade Canyon and I found this photo on the internet. 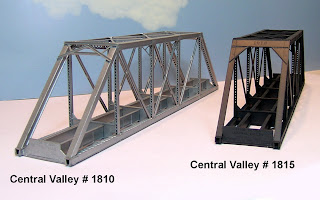 These are the two completed Central Valley Model Works bridges.  These are great kits and now they are also selling the components as separate items for those who want to scratch build a specific bridge.

There are still more bridges to build or collect for this layout and this effort is continuing.
Posted by nscalestation at 1:00 PM