In previous posts I had mentioned the use of some automation in the staging yard, here is just a bit more detail about how that works.

I am using Aztrax IR sensors to sense when a train arrives on one of the four staging tracks.  The sending units are in stands made from brass while the receiving units are in the tracks between the ties.  These are positioned near the departing end of each staging track.

The post on one side of the stand is 1/8 inch hallow tube and the wires for the IR sending unit are fed down through it.  The post on the other side is 1/8 inch rod that has had the end threaded for 6-32 sized nut.  Before the IR sender LED's were installed, the stands were spray painted white.  After the IR sender LED's were installed white heat shrink tubing is slipped over after a hole is punched on one side for the sender. 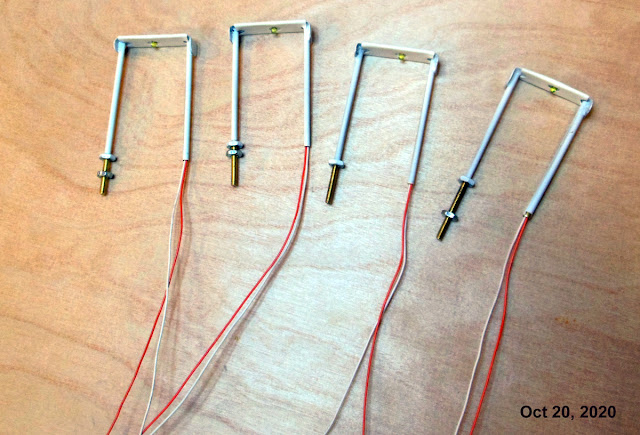 Referring to the control panel photo and diagram below I will attempt to explain how this works.  When a train arrives at the IR sensor pair it triggers a one second closure of the relay on the Azatrax board. The relay contact outputs of the Azatrax units are wired in parallel with the push buttons on the control panel associated with the next track but first pass through a toggle switch labeled Auto / Manual in the photo.  In the auto position the contact will trigger the turnouts for the next track and the train on that track will leave.  In the Manual position that track will be skipped and the closure will go to the next track.   This allows the flexibility to use any of the tracks and skip others in the case there is no train on that track. 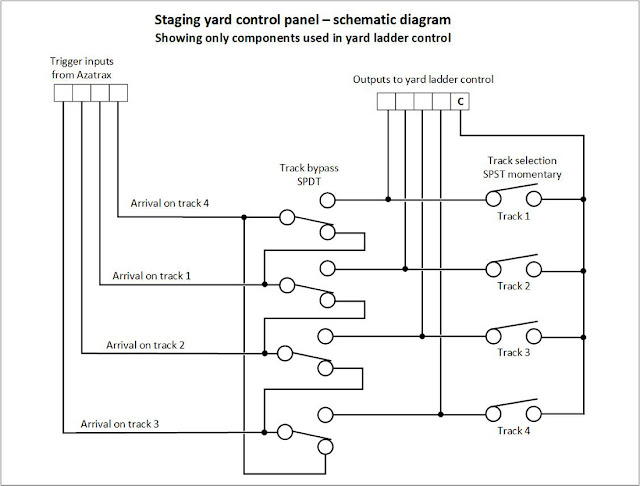 In the photo below one of those IR sensors between the ties is pointed out.  This system has been working out fairly well.  I did have to move the sensors around a bit to allow for the arriving train to coast to a stop before reaching the end of the siding.   Also it does occasionally happen that the train stops with the sensors being right between the first and second locomotive.   If this happens then when that train goes out again, the second locomotive will be mistaken as an arriving train and cause the sequence to move to the next track. 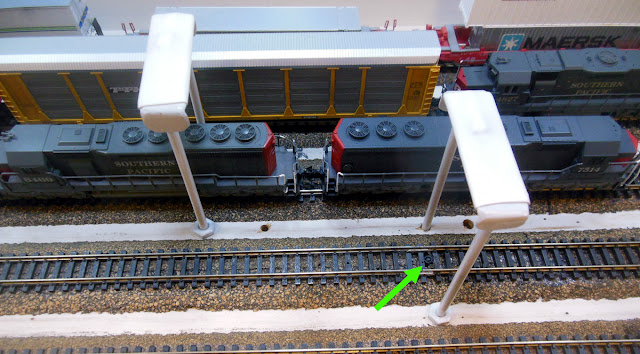 Posted by nscalestation at 12:11 PM