I have always admired the tall steel viaducts and wanted to model one on a layout.  I don't know of one being anywhere along the line I am modeling but decided to have one anyway.   This bridge will replace a temporary "track on a stick" type bridge that I put in last March.

As there is no prototype to try to model this from it is of my own design using Micro Engineer parts.  After a lot of trial a fitting this is what I came up with. 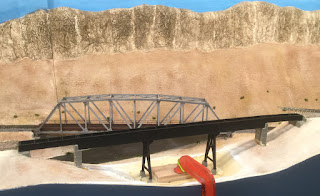 Turns out that this viaduct did not need to be very tall so I only used the upper section of the towers and even had to carve out the area below to make those fit. 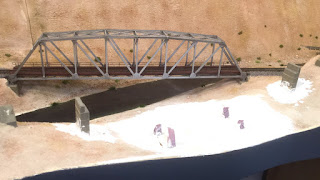 The land contours under the viaduct had to be redone after all the concrete footings and bridge piers were set in the correct places.  Those were all made from wood with joints carved into them. 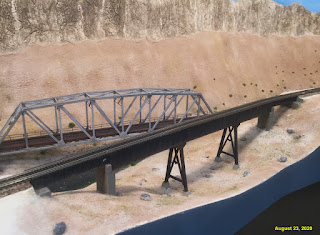 Once I was satisfied with the shape of the land some basic scenery was added then the bridge was installed and the Micro Engineering bridge track with a couple of inches on each end having the bridge ties replaced with standard ties.   This track assembly was attached with E6000 adhesive. 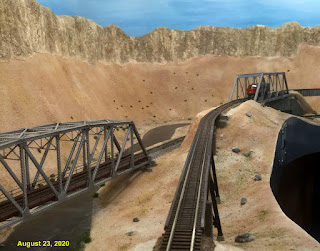 Here is an end view looking down the line.  The guard timers have been added to the bridge ties.  Next will be adding the code 40 guard rails, ballasting the track at each end, and adding some shrubs and other details in the area under and around the bridge.

Posted by nscalestation at 11:10 AM