There was a time when very few mass produced motor vehicles were offered in N Scale and most of those were models of European prototypes.  Because of the small size, cast resin vehicle models were practical and several smaller manufacturers developed cast resin kits for the N Scale market.  I had purchased and built my share of these in the 1990's.

As time went on some great ready to run plastic and metal N Scale vehicles became available and my box of yet to be finished cast resin kits got neglected.  Every one in a while I get the itch to pull one or more of those old kits out and finish them.     Recently I finished two more kits to create some trucks I wanted for the layout. 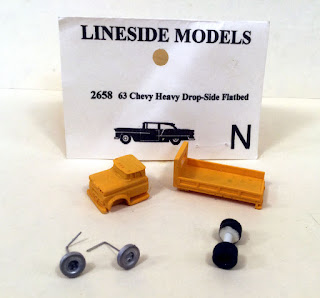 I chose this Lineside Models cast resin kit to make a Western Pacific Maintenance of Way truck.  In the past I have had some problem with wheels coming off when just attached with adhesive so I made axles for these which should give them a bit more support.  I used the metal front wheels that came with the kit and some cast resin wheels I had for the rear. 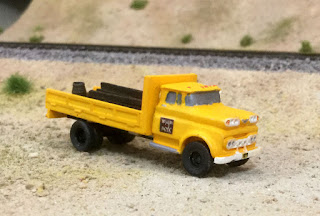 The yellow I painted this model with was not much different than the raw casting.  The windshield and window were painted gunmetal, the tires weathered black and the hubs engine black.  The Western Pacific decals were from nscalekits.com and the license plates from Microscale. 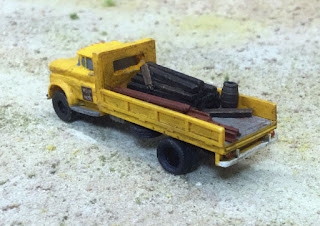 As even in my earliest layout era this early 1960's model would have been in service for quite a few years it got a good amount of weathering.  From my details bin I found a barrel and a stack of ties and then glued together a stack of scrap code 55 rail for a load. 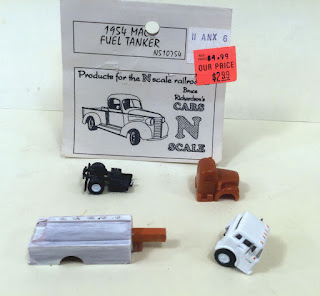 The second vehicle project was using the back end of a Cars N Scale fuel truck and mating with with a cab from an Athearn Ford C cab tractor.  This makes the model fit more closely to my earliest layout era plus I like the detail on the Athearn model.  That 54 Mack cab from the resin kit is great too and I'll use it somewhere, someday. 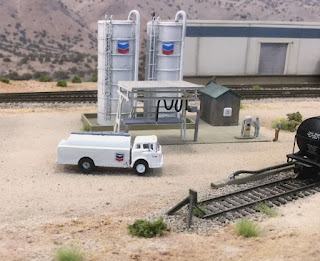 So here is the finished fuel truck that will serve the diesel distributor in the 70's - 82 era.   I am working on some other trucks that better fit different layout eras but I won't have to use the TomyTec model of an Isuzu milk truck as a stand in anymore.
Posted by nscalestation at 8:45 AM