First working signals on the layout

I have always enjoyed railroad signals on a layout but have also found them to be one of the more challenging things to accomplish correctly.  In the past either on modules or on friend's layouts I have installed a few signals that were animated with either a connection to a turnout or a detection and timer type circuit.  This time I wanted to try some actual occupancy and the helix seemed to be in need as I had a couple of occasions recently where I have lost awareness of which track in the helix a train was on. 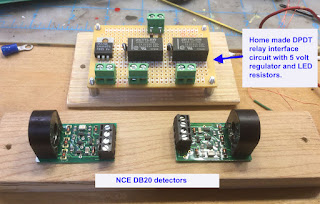 For detection I was thinking of using the occupancy outputs on the PSX-1's but found that they would not drive my low current relays so I instead used NCE DB20 block detectors.  Check this recent post to see how these work.   These were mounted under the helix. Where the lower yard goes into the helix this is the searchlight signal that indicates occupancy on the inner loop of the helix.

The pole and mounting bracket were made from brass, then a #6 washer was used for the target and the hood was made from polystyrene tube.  The LED is bi-color and 3 mm size.  Magnet wire was run down the brass tube pole. 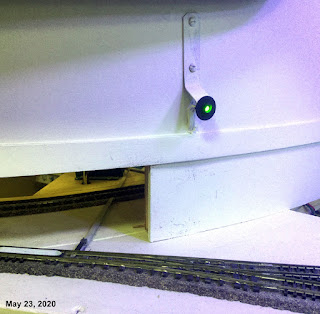 Where the upper yard enters the helix I made the same type of searchlight but without the pole.  Instead it was attached to a bracket that was mounted to the side wall of the helix.

This signal indicates occupancy on the outer loop of the helix. 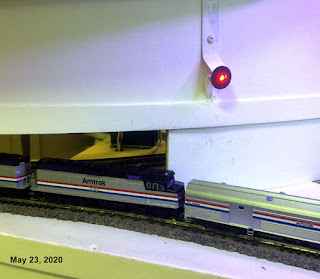 Both signals are mounted near where the gap is between the helix PSX-1's and the yard PSX-AR's.

Here the signal has turned red as the train has crossed into the helix.  In the case of this Amtrak train the entire train must clear the helix because of the wheel contacts on the Kato passenger cars.


These signals would be close to O scale in size but since they are in the staging yard that is not an issue and it has given me a chance to get into some signaling.  The next step will be to buy or make some signals closer to N scale for the top of the helix.
Posted by nscalestation at 7:48 AM