A section house for Battle Mountain 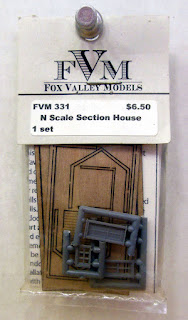 Before Fox Valley Models became a well known brand of N scale locomotives and rolling stock they had a few laser cut wood kits.  I picked up this section house kit at a train show quite a few years ago now and had never put it together and recently re-discovered it in my stash of stuff.

I have always enjoyed laser cut wood kits.  One thing that was different about this one was they had designed it to use Tichy windows and doors which I was already familiar with from scratch building projects and really like. 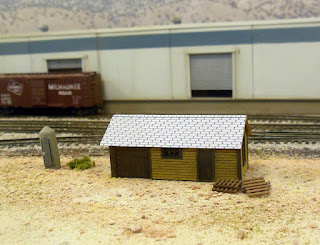 Here is the finished structure after assembly and painting.  I did not really like the roof paper that came with the kit and used some that I had printed myself.   Any manner of junk could be placed around this section house but for now I just scattered some pallets there.

For now it is in an area between the Barite facility and the bulk oil dealer but it may move later as it does sometimes happen that railroads move these small maintenance buildings.  The small structure to the left is not an outhouse.  It is a concrete telephone booth used by the Southern Pacific before the days of the 2-way radio.
Posted by nscalestation at 5:53 PM