Next 5 feet of the layout is on the way.

As I have been doing for the past several summers now, I am starting the bench work for another section of the layout.  This one is going to be 5 feet long and is called the Harney section. 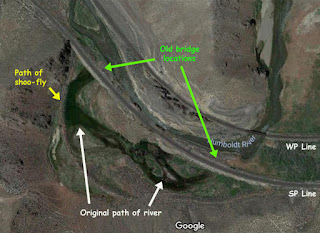 Harney is the name of the area in the Palisade Canyon where in 1939 the Southern Pacific's City of San Francisco passenger train derailed at a spot where the track had been sabotaged.   After the derailment which destroyed a bridge, the SP diverted the Humboldt River eliminating the need for that bridge and another bridge. 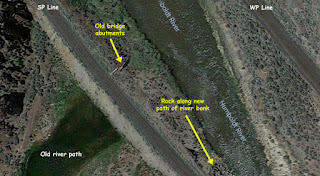 A temporary shoo-fly was built while the work was going on.  From today's satellite photos the old alignment of the river, the path of the shoo-fly, and even some old bridge abutments can be seen.  I have pointed these out in these first two photos.

This is another spot several miles east of the derailment location viewed upside down to match the orientation of my layout.   This more closely matches my plan for this new section of the layout.


With this being a shelf type of layout with the depth being about 18 inches I don't think I could represent the old river path or the shoo-fly path very well.  What I may do is to have the SP line built up on a levy then through the realignment area.

My plan for this section which will be 5 feet long is to bring the river back in from the front and progress between the SP and WP tracks as it does in many places along this line.  The WP line will be carried across the river by a BLMA brass thru truss bridge I purchased several years ago.  This section will also begin a transition from a photo back drop to a modeled canyon wall back drop.
Posted by nscalestation at 11:36 AM