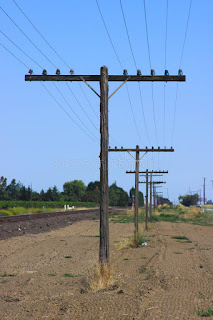 Most railroad line side poles didn't have to be very tall if there was enough space and there was nothing that had to pass underneath.   This prototype photo shows an example of this.  Shorter poles would have been cheaper for the railroad and might have made maintenance a little easier. 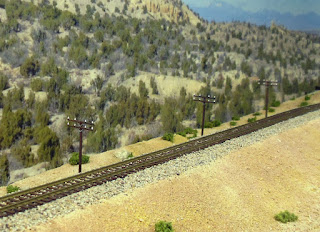 There were even spots where from track level the wires appear to be close to even with the track because the track is built up on fill.  This photo of the SP line between Golconda and Wesso on the layout shows an example of this.

The stock height of the Atlas line side pole is just right for most applications but I am going to have a few places on this layout where the line poles are going to cross a track and are going to need to be taller than the standard height to look right. 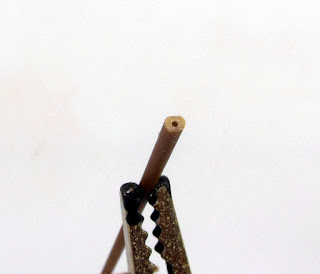 Atlas poles are tapered with the bottom being the widest at about .085 inches diameter.  I had some styrene tube that was .095 which gave me an idea of how to extend the height.

After making the bottom of the pole flat with a file, I drilled a .026 hole in the center about 3/8 inch deep. 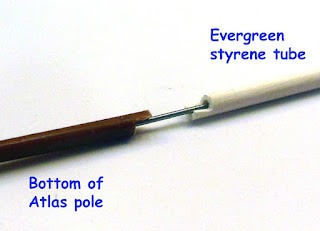 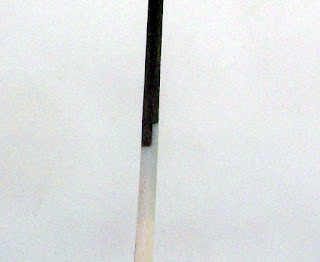 This is what it looks like after some sanding.

I try to keep the two sections straight until the adhesive dries.  If the fit is not perfect any gaps can be filled with CA and then re-sanded. 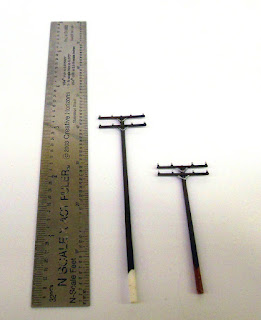 Then after painting the extended pole will look like the one on the left in this photo compared to the standard pole on the right.

That .020 steel wire inside gives the extended pole enough strength to endure any minor bumping while on the layout.

Posted by nscalestation at 9:47 PM