First crossing of the Humboldt River

As mentioned in previous posts both rail lines cross the winding Humboldt river many times between Winnemucca and Carlin, Nevada.  In some places only one line crosses the river and in others both lines.  The first full crossing of the river going east from Winnemucca is just east of Golconda. 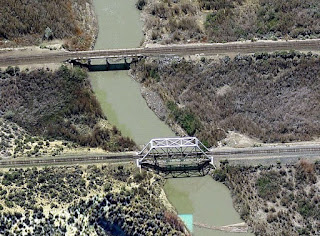 This shot of the actual location is from Bingmaps Bird's Eye View and is looking toward the south so the orientation is the same as the layout.  The WP line is in the foreground crossing the through truss bridge and the SP in the background crossing the ballasted concrete deck bridge. 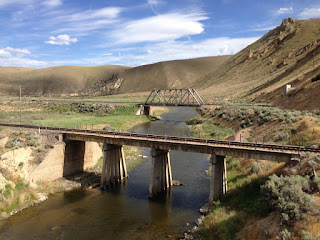 I found this nice shot on the internet.  This location is actually a bit east of my modeled area but is typical of the types of bridges used and of the spacing between the lines.

In full size this photo shows great detail of the concrete bridge and I am using it as a reference to scratch built a model of it.


I had considered using the BLMA segmented concrete bridge kit but it only has 3 pilings per bent and this prototype has 6 so I am scratch building this one.  A couple of years ago I scratch built 3 similar type bridges for one of my Ntrak modules.  Those bridges were based on parts from a Tomix kit and were not intended to be of any specific prototype but some of the techniques learned on those will be applied to this bridge. 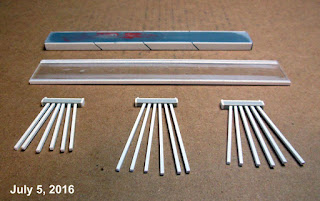 Here is my start on the segmented concrete bridge using some 1/8" thick clear acyrilic and some 1/4" plastic materials as a core and then adding the more features with Evergreen strip polystyrene materials. 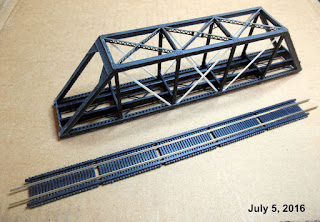 To model the through truss bridge I am building another Central Valley Model Works kit which I have shortened from 4 sections to 3 to match the prototype.  I already have two of these I've done for the Palisades area of the layout.

This scene will be on the next module which is going to be called the Golconda module.  It will be a small module only about 3 ft in length and will be above the paint booth.
Posted by nscalestation at 3:00 PM