Work has begun on the Carlin section of the layout which is about 11 feet long and will be above the staging yard.  I have not been great about making drawings for most of the layout but as I will need a control panel for this area I do at least have the graphic for that panel below which will be used to create display panel.  I call it a display panel because all but one of the turnouts are going to be controlled with push-pull rods with LEDs on this panel showing the status of the turnouts.

In the steam era Carlin had lots of railroad facilities but that had been cut way back by the 1970's and even more so after the UP merger.  In the era that I model, Carlin was still a crew change point on the Southern Pacific as it was half way between Sparks and Ogden.   Crews based at those terminals would stay here for the required rest period before taking another train for the return trip home.   The Western Pacific line passes through on the other side of town so there were cross overs so eastbound SP trains using that line could come into the SP yard then return after crew change and servicing.

A local originated from here so a road switcher and a switcher will be stationed here as well.  There are a few industries just to the east of town but since I don't have the length to do it that way they will be represented along the front edge.

As I have done in the past, this section is being worked on in the middle of the room sitting on saw horses.  Here is a recent shot of the east end of the yard.  When track laying is completed the section can be set up on it's back edge to make the turnout controls and wiring much easier to install. 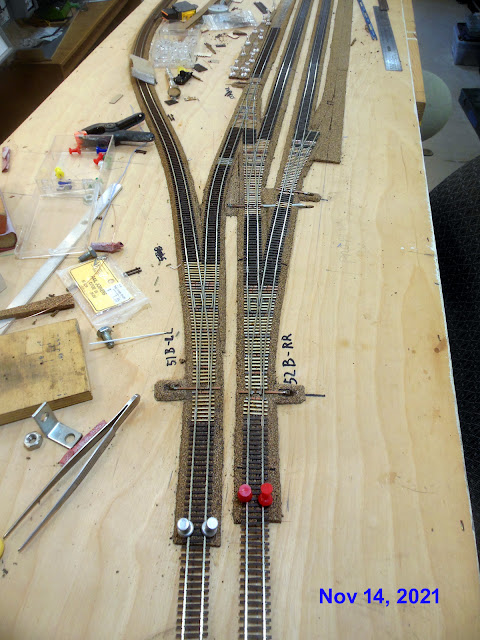 Posted by nscalestation at 3:24 PM