One of the industries that will be in Battle Mountain will be a bulk fuel distributor receiving product by rail and shipping by truck.   Turned out that I really didn't have to buy anything to build this as I had parts from a Walthers Interstate Oil kit that I had purchased about 25 years ago and used parts of it on several different scenes on my modules and old layouts. 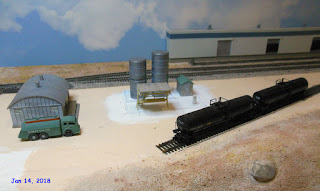 The building had been used in a junk yard scene, the loading platform in a refinery, and the pump house in an oil field.  Some finished tanks used in a locomotive facility got sold on ebay but I still had enough tank sections left over to assemble two more tall storage tanks.

So now almost all the remaining parts from the original kit will be together again on this layout.  Goes to show that if you carefully pack items removed from a layout they can be kept safe and used again. 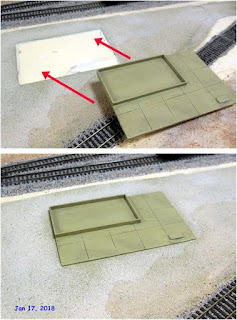 In the case of the group of smaller structures in the middle of the fuel distributor I made a base from a scrap of fiberglass reinforced plastic with the smooth side up.  This scene can be now completed on the work bench and installed on the layout later. 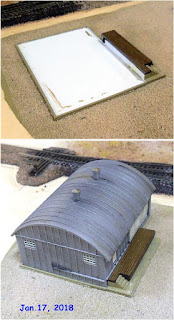 The original loading dock on the building was damaged so I built a new loading dock that is actually attached to the scenery base which in this case is a .020 thick styrene sheet with .040 x .040 styrene strip perimeter.

This next photo shows the building placed in it's spot.  The fit is snug enough so not to be easily knocked loose with normal layout usage but can be easily removed for access or maintenance.  On modules I do something similar as shown in these examples but with screws added to hold the building or base onto the module.

More on this fuel distributor in future posts.

Posted by nscalestation at 2:32 PM