Line side poles - round 2

Last March I had posted about my use of Atlas telephone poles in Line side poles.  As I prepared to do another batch it was bothering me again that 2 of the 12 poles in each set I was not using because of the transformers.  I was also noticing that in the prototype photos the poles all had 2 cross arms instead of the 3 on my models. 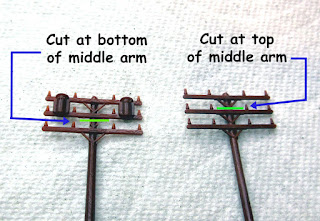 So I decided to remove the top cross arm on all of the non transformer poles by cutting the pole at the top of the middle cross arm.

On the ones with the transformers, I cut the pole at the bottom of the middle cross arm leaving only the bottom cross arm. 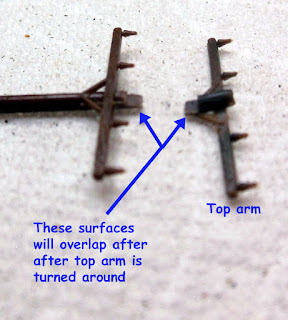 I then filed a notch through half the back side of the top arm and half the front side of the pole and bottom arm.  This is shown in this photo with both facing the same way so the notches can be seen.  The top arm will be turned around when gluing them together. 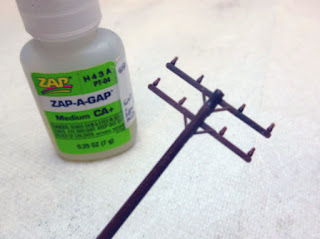 After some adjustments in the notches to get just the right fit, the two pieces were glued with Zap-A-Gap medium CA.  With a little sanding and paint it will be very difficult to see the splice.  Using this technique I will be able to use all 12 poles in each box plus have some cross arms left over. 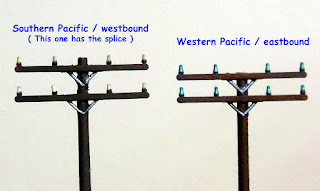 Another thing I am doing is to paint the insulators a different color to differentiate between the two different railroads.  I have no idea what colors either railroad used.  I have been using NYC jade green for the WP and a light gray for the SP.


Over the Thanksgiving weekend we had a train show in the SF Bay Area where my Ntrak group had a layout.  It was another good show for shopping as several dealers had piles of stuff to dig through and I came up with another box of the Atlas poles for $2.00.  A bonus was that there were 18 poles inside so it was actually a box and a half.

There are 36 poles now done and installed on the layout with another 120 "stock" poles waiting to be worked on.  That is more than enough to populate the layout as it is now but I estimate the complete layout will need about 250 poles so there will still be many more needed.

Posted by nscalestation at 12:12 PM