Sometimes what looks good on paper does not work out in 3D.  As I started in May of 2013 to lay out the new room within the garage and allocate space between the train room space and the garage space I realized that I would not be able to give up as much garage space as I had hoped.  Originally I was going to take the back 13 feet of the garage but discovered that having only 7 feet left for all of the other uses would just not be enough.

I also discovered after making a full sized mock up with cardboard boxes that the space I was allowing for a module work area in the train room was going to get rather cramped.  So I decided to go with a 50% use of the garage which would result in a 10 ft x 21 ft train room and no Peninsula. 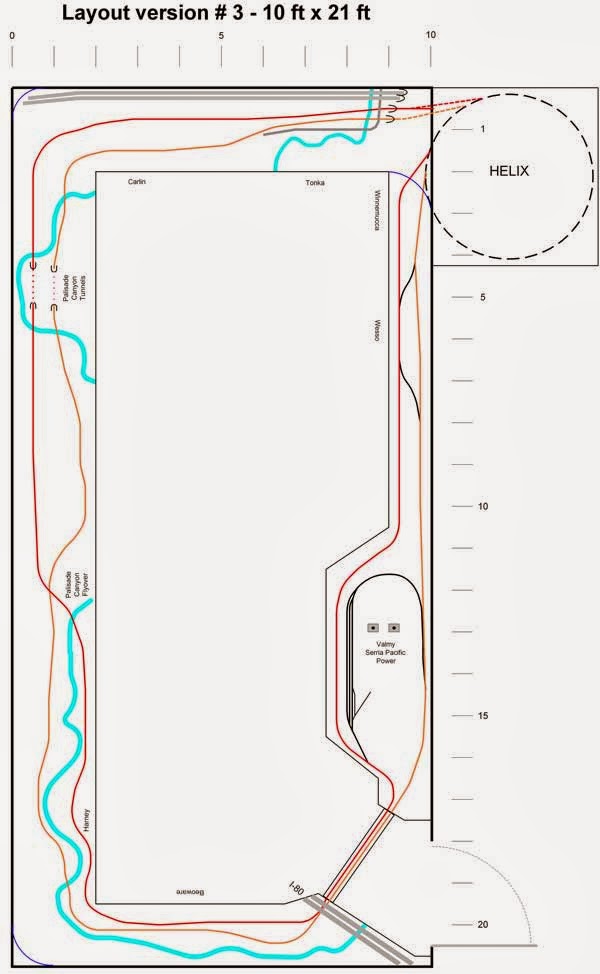 I was counting on using the 3 ft width at the end of the peninsula for the helix and did not like the idea of filling up one corner of this narrow room with the helix.  I came up with the idea that I could have the helix inside a 4 ft x 4 ft bump out which would free up the full perimeter of the room for scenicked parts of the layout.  The part that sticks out into the garage would be in a blind corner anyway.

Here is the drawing for version 3.  It's a simpler around the walls type of layout with a two stacked helix's for each end of the layout to access it's own staging yard.  This drawing does not show the staging yards which would be above the top section and below the right section.

Another issue that came up as I was laying out the area for this room was that the concrete floor of the garage was too cracked, tilted, and uneven to be able to easily roll the items I wanted to have on wheels.  To have the garage floor demolished and replaced was cost prohibitive so my only other option was going to be to build a raised sub floor for the room.
Posted by nscalestation at 8:43 AM