Over the next few years after that trip to Denver in 2001 I would occasionally do some internet research of the Southern Pacific and Western Pacific operations through the Palisade canyon.  I would follow the tracks on Google Maps satellite view and note the tunnels, bridges, sidings, and other features.  Then I started to collect photos of the line from the internet and figure out on the map were those locations were.

As I studied these things, I began to think that this would be a good prototype for a new layout I could build in the future, possibly when I had more room for one than I had at that time.

During this period of time I had dismantled a 12 ft x 3 ft layout that had been along a long wall in my spare bedroom / office space.  That layout consisted of my two 4 foot Ntrak modules, two end sections, and a staging yard.  This layout was replaced by a 12 ft shelf layout at a 51 inch height in the same location and that was loosely based on the Southern Pacific's Northwestern Pacific branch in Northern California.   Also during this time I was continuing to operate and further finish the two Ntrak modules. 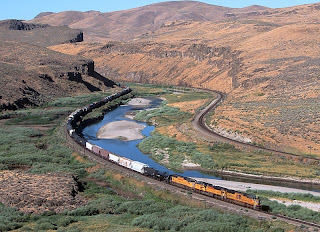 It was images like this one that I found on the internet that inspired me to think about the Palisade Canyon as a subject for a model railroad.

One of the things I noticed was that there did not seem to have been much modeling the Palisade Canyon area going on in any scale.
Posted by nscalestation at 8:58 PM