The Los Angeles Terminal District was a layout I started in 1997 after completing an addition to our home that took it from a 2 bedroom, 1 bath to a 3 bedroom, 2 bath home.  I was able to have one of the smaller bedrooms for a train room.  The long part of the room was just over 12 feet and I built the layout along that wall.

The layout was built around two existing 4 foot Ntrak modules that I had started in 1992.  A special section was added to each end and an 8 foot, 4 track staging yard rested in front of, and a bit lower than the Ntrak modules.  A frame of 2 x 4's was installed across the room that these all sat on, along with some hidden inclined track that connected the layout to the staging yard.  The overall size was 12 ft x 3 ft.

Back problems, the 36 inch depth of the layout, and the weight of lifting the Ntrak modules in and out of the layout led me to dismantle it in late 2001 and start the California Northwestern layout in the same spot.

This drawing shows how the two Ntrak modules, the two end sections, and the yard fit together.


In another configuration the yard could be placed behind the sky boards of the Ntrak modules on the same level.  The idea was that the layout could also be displayed at shows this way and I had legs for the two end sections that matched the height of the legs of the Ntrak modules.  This was set up and tested one time but the layout was never publicly displayed.  The two Ntrak modules were displayed many times as part of Ntrak layouts between the early 1990's and 2011 when they were rebuilt.

I grew up near downtown LA and would frequently see switchers and road switchers of the Southern Pacific, Union Pacific, and Santa Fe railroads.  There had also been short line railroad called the LA Junction Railroad which was owned by the Santa Fe and used CF7's to service many industries just south east of downtown.  My free lanced layout is an expansion of this idea.  On this layout the Los Angeles Terminal District is a creation of the 3 larger railroads that services industries over a much larger area.  Most of the locomotives came from the SP.  I had a set of 4 GP30's and 4 GP9's that mostly worked the layout which was operated using a Digitrax DCC system. 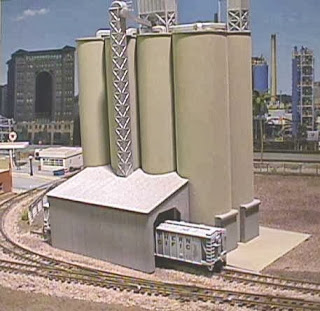 The center of the layout first had a concrete pipe manufacturing company.  I had remembered a facility like this being on the SP Santa Ana branch near the Alameda Street junction. Later I replaced this industry with a refinery. 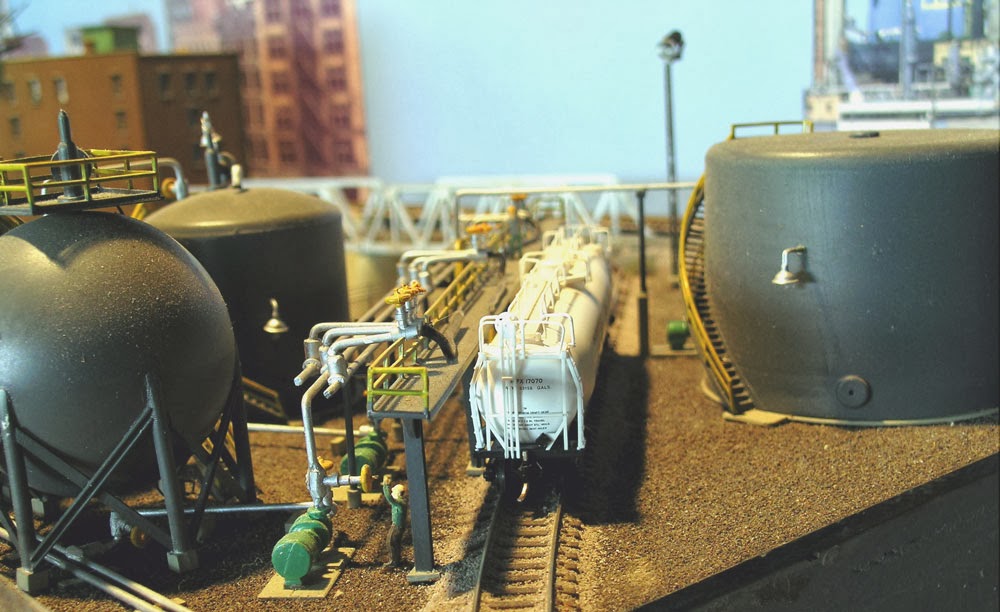 The refinery was made up of a combination of Walther's and Plastruct Refinery kits plus some scratch built items like this tank car loading platform. 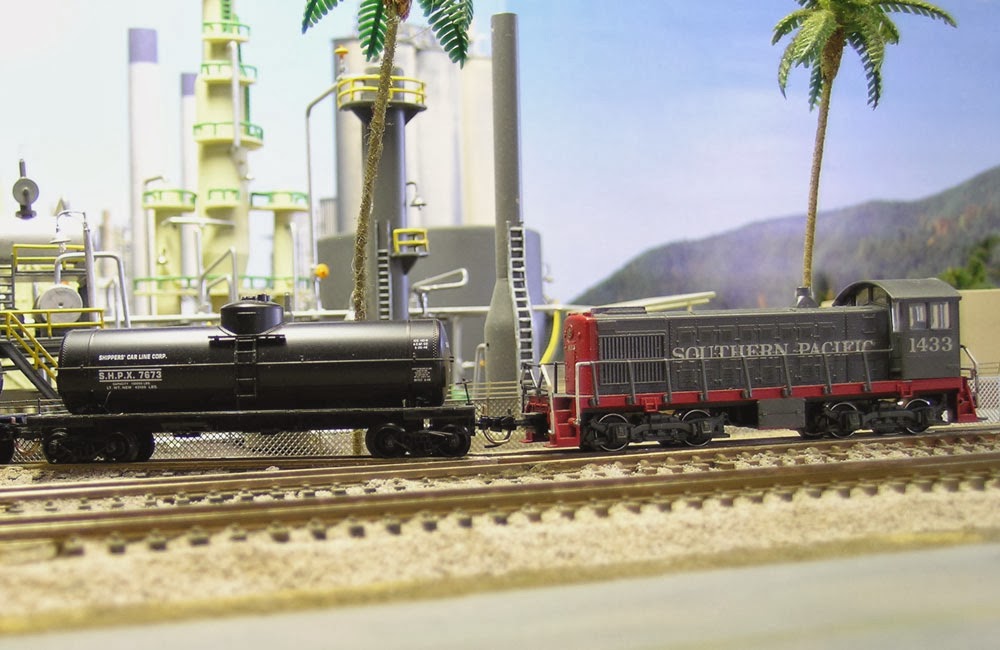 Here is a scene from in front of the refinery as an Arnold S2 pulls a few tank cars away from the loading platform.  I painted a couple of undecorated S2's back in the early 1990's but never used them very much as they don't have DCC decoders in them. 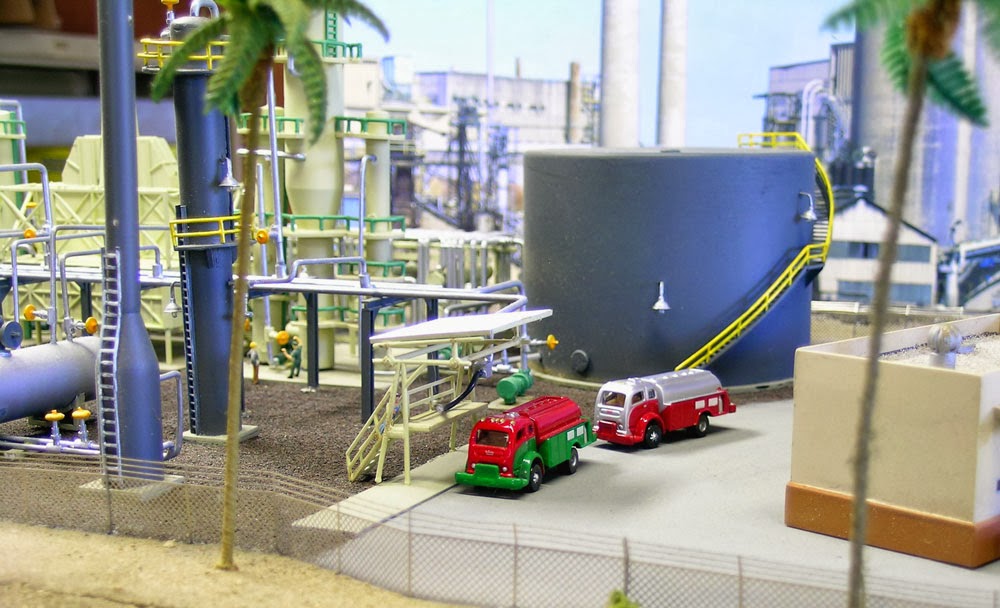 This view shows the fuel truck loading platform.  The entire facility was enclosed with Gold Metal Models fencing like the one in the foreground of this photo. 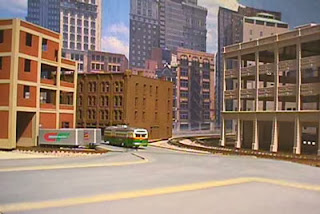 On the left or North side of the layout the end section featured a number of buildings from Walthers and Design Preservation Models. In this view these buildings are not yet finished.  I had also put tracks in the street with rails spaced at 42" for a non operating street car scene.  Never did get around to putting up the overhead wires. 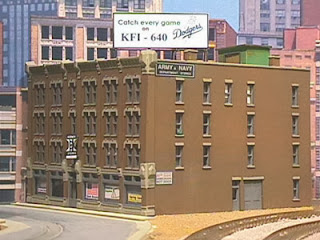 Here is a closer view of the DPM building after it was finished.  After the layout was taken down in 2001 this building was moved to one of the Ntrak modules where is served until 2011.  After that it was sold on ebay. 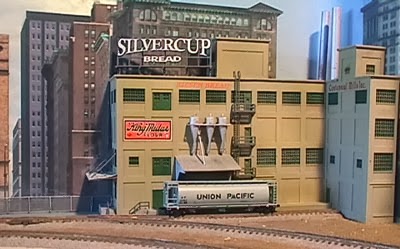 In the far left hand back corner I had a modified Walthers Red Wing Milling building.  This was another building that I sold on ebay after the layout was dismantled. 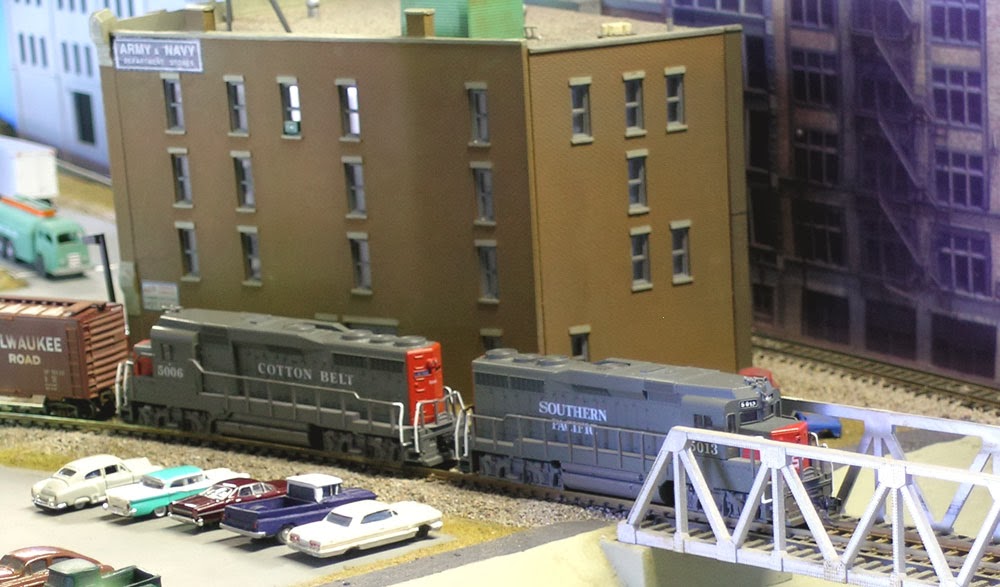 Here is another view of the DPM building in it's location on one of the Ntrak modules.  That's the Ntrak blue line that the GP30's are running on.

In this looking down view both the DPM building and the Walther's Hardwood Furniture buildings can be seen on the Ntrak module.  The building on the left is a DPM Gripps Luggage Co. building that was in the same location on this module 1992 - 2012.

The Walthers Hardwood furniture building was the largest structure on any of the modules.  The open auto rack contains 1974 Datsun 240Z's from TomyTec. 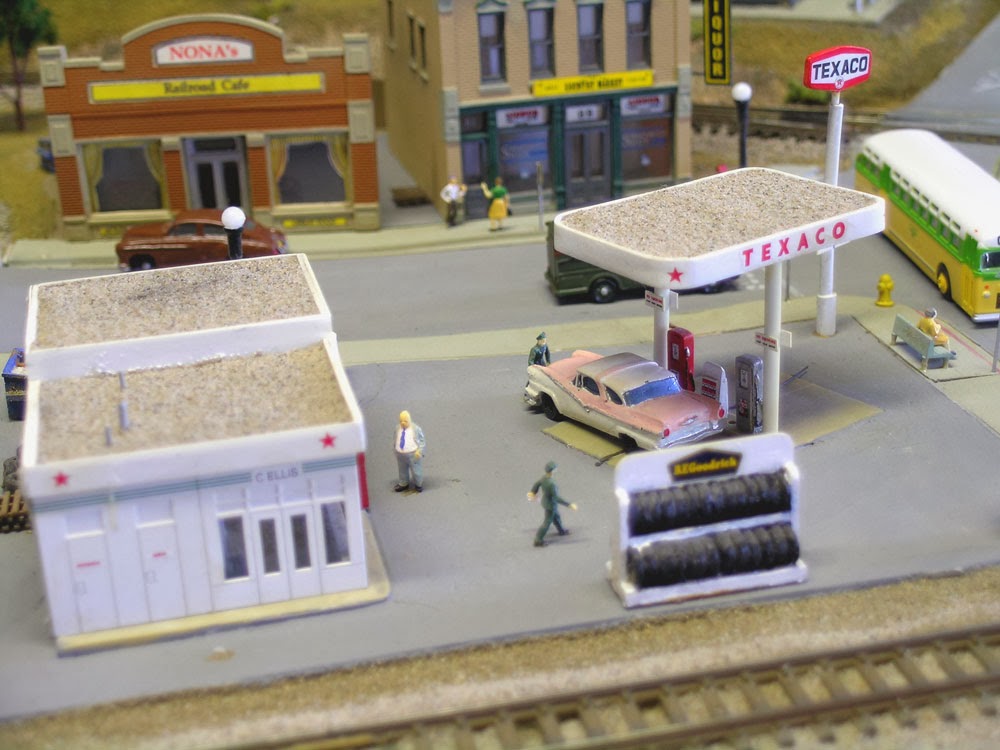 The right hand Ntrak module featured a Showcase Miniatures Wally's Filling Station kit.  I seperated the pump section from the building and raised the roof higher.  A total of 64 Micro Scale decals were used on this gas station. The Texaco sign was scratch built and rotates from a motor under the module.  This Texaco station was re-installed in the 2012 rebuild of this module. 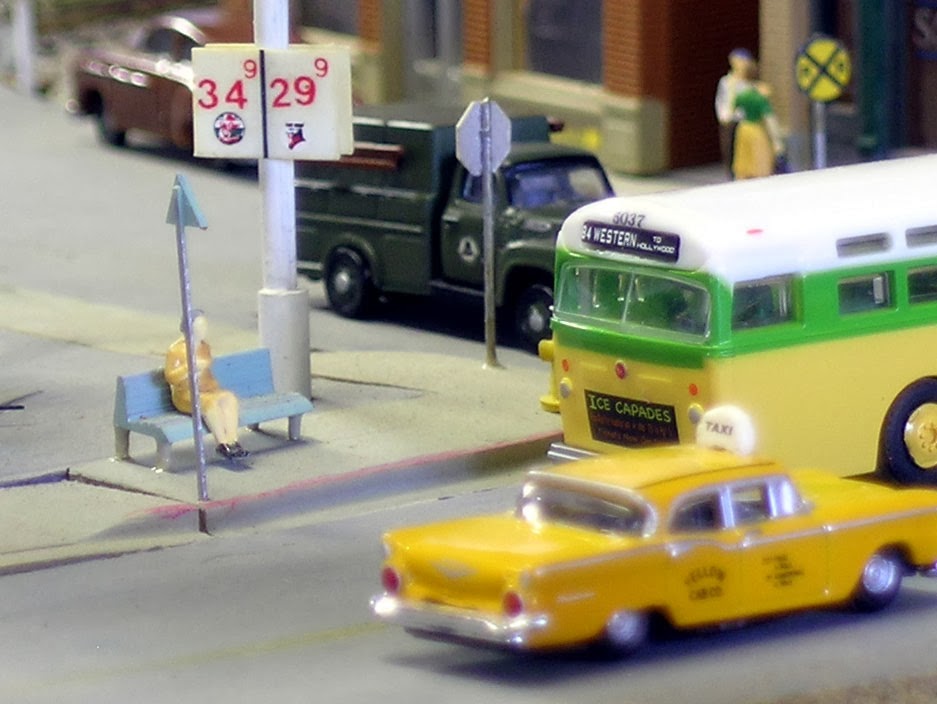 This bus stop sign I made up from my memory of them.  That pale green color was started when LAMTA (Los Angeles Metropolitan Transit Authority) was created in 1958.  The Wheels of Time bus is in the older LATL (Los Angeles Transit Lines) colors. 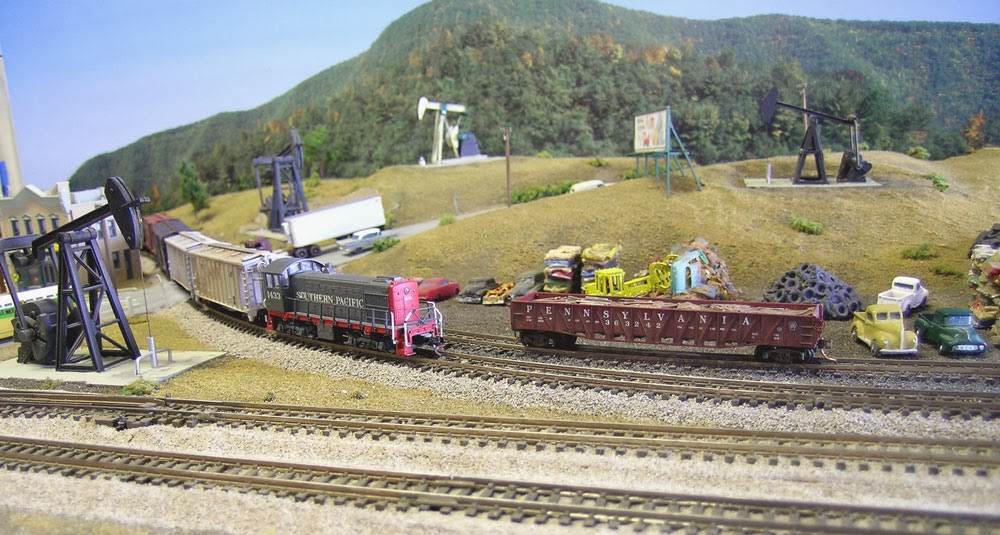 The right hand Ntrak module also had an oil field with 4 animated oil wells.  These were very common in this part of Los Angeles during the 1950's and 1960's. 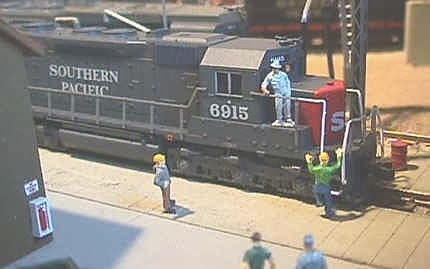 The far right hand end of the layout had a small engine servicing facility and yard loosely based on the Southern Pacific's Delores Yard.


Hope you enjoyed this tour of one of my old layouts.