This is an overall view of the layout made from several look down photos patched together.  The overall size of the layout was 26 inches by 12 feet.

The construction of the layout was a simple 1/2 inch plywood shelf with layer of styrofoam insulation board to make terrain.  Woodland Scenics foam risers to used to elevate the main line between two slightly different levels. 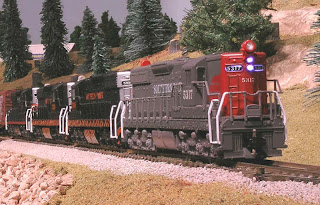 The Northwestern Pacific of the 1950's and 1960's used EMD SD7's and SD9's that were leased from the SP.  I had started collecting Atlas models of these back in the early 90's and re-numbered them to match those that ran on the NWP. All have DCC decoders in them and a few have the Barrel lights that the SP used at that time 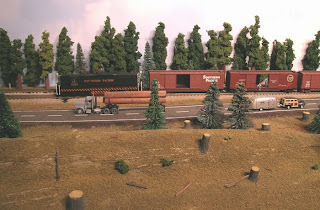 The largest industry in this part of California at that time were related to logging.  I used a lot of pre-painted cast resin tree stumps from California Freight and Details to show areas were trees had been cut and to clear some of the foreground areas of the layout for accessibility. 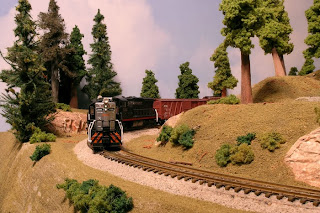 Each end of the layout came out to about 26 inches in width to allow for a 12 inch radius loop.
Woodland Scenics risers were used to make the road bed climb about 2 inches from the front to the back of the layout.  Having the return loop going around a hill helped to disguise the small radius. 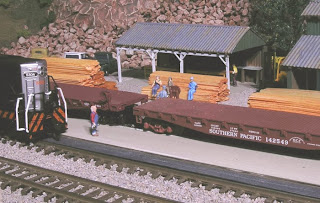 I did have one lumber mill on this small layout to represent that major industry.  In the days before specialized lumber flatcars and packaged lumber products, 40 and 50 foot box cars and flat cars were used which look better on a small layout like this one. 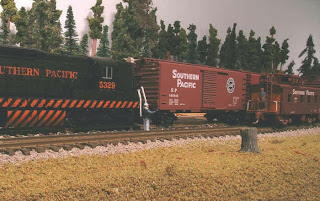 There were two passing sidings on the layout, one in the front lower level and another on the back upper level.  Each could fit a couple of engines and a train of 8 to 9 cars plus a caboose. 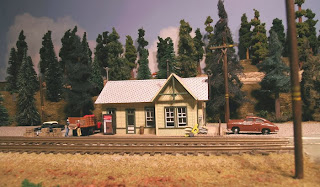 There was one small town on the layout that I gave the fictitious name of Nona Creek.  This is the station there which is from a Bar Mills wood kit. 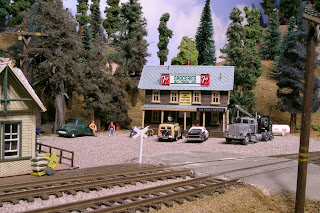 Nona Creek also had a general store / bar / cafe shown in this photo.  This structure was made from parts of Model Power houses that I had left over from another project. 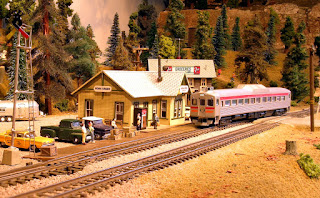 Passenger service on this railroad was provided by a single RDC-1 shown here as it pulls into the station.  This RDC was unique as it only had a cab at one end after a collision with a logging truck.


This layout was taken down during Thanksgiving of 2013 when the new train room was completed. I enjoyed building and operating this layout and learned a lot from it as well.  Almost everything on this layout was salvaged to be re-used in other projects or sold on ebay.